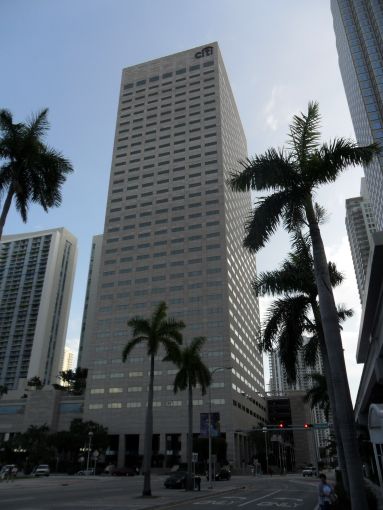 Citigroup Center at 201 South Biscayne Boulevard in Downtown Miami is adding six new tenants to its roster across 28,000 square feet.

Some of the tenants that took space at the 810,000-square-foot-building at the corner of Biscayne Boulevard and Southeast Second Street, are relocating from Brickell, according to the landlord, CP Group.

The larger deals include Andbanc, a private banking company, which recently moved into an 6,680-square-foot suite; Plus International Bank, which leased 5,736 square feet; Olio, a real estate investment firm, which took 3,885 square feet; and Resource Systems Group, a management consulting company that moved into 2,891 square feet.

The PR agency was downsizing from 80 SW Eighth Street as it has switched to a hybrid work model, and needs only conferencing space a few times out of the year, Sidner said. So the cheaper asking rent downtown and the prebuilt space prevailed.

“Brickell rates have gone up, as most people know, significantly over the years. So it was really about finding somewhere in the [central business district] that can accommodate conferences a couple of times a year,” Sidner told Commercial Observer. “They also wanted to be somewhere that was under 60 bucks a foot, and you can’t really can’t find that in Brickell.”

The move-in-ready spec suites that have been leased were renovated in 2021 and 2022, according to Citigroup Center, which announced the deals but did not disclose the length of the leases, asking rents or names of the tenant brokers.

“This leasing momentum demonstrates how companies are folding nimble, thoughtfully designed, and ideally located office spaces into their long-term business strategies,” Steven Hurwitz of JLL, who represented the building ownership alongside Doug Okun and Madeline Fine, said in a statement.

CP Group also announced the building will be repositioned with a new logo, website and branding that will coincide with a renovation that will add a restaurant and cafe.. That renovation is separate from plans to develop another 37,000 square feet of spec suites, which will be spread across 10 individual suites ranging from 1,900 to 9,000 square feet.

Mark Hallum can be reached at mhallum@commercialobservere.com.