‘There hasn’t been a breakaway company, even though there’s so much potential.’ 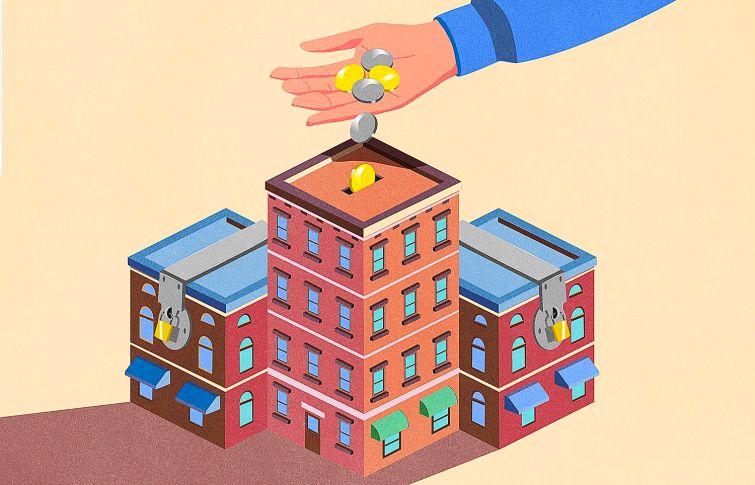 The deferral of the American dream is even fueling a new class of rent-to-own startups, which have emerged in recent years to provide alternative paths to equity, ownership and wealth. These startups have attracted funding from the likes of Goldman Sachs, Fifth Wall and Sequoia Capital, and now need to recalibrate to ride out an increasingly tricky market.

“The reality is during a recession more people rent, and are forced to rent,” says Needham Hurst, chief operating officer of Up&Up, a startup with a portfolio of roughly 500 homes that helps renters build wealth while making monthly payments in pursuit of ownership. “We think we can compete with the people who otherwise don’t want to rent. They will choose an option like us.”

The rent-to-own (RTO) model and concept seemed flush with potential during the recent boom years for single-family home sales. Hip-hop mogul Jay-Z became an investor in Landis, joining numerous VC luminaries and investors. Andreessen Horowitz and Tiger Global Management invested in San Francisco Bay Area-based Divvy, which was once valued at $2 billion. In 2021, Blackstone purchased a pioneer in the space, Home Partners of America, for $6 billion. Flow, the nascent rental housing startup from WeWork founder Adam Neumann, has floated plans to include a way for renters to acquire equity. And Invitation Homes, a national single-family rental giant, invested $250 million last year to launch Pathway Homes to “provide opportunity and choice in the overall housing market,” per CEO Dallas Tanner.

Other such apartment equity models, such as the now-defunct Rhove, offer perhaps hundreds of dollars in equity a year — a benefit but not a true path to homeownership.

“I would say venture has been more willing to tackle hard problems in the last three to five years,” says Up&Up’s Hurst. “Our business is a long-term, profitable relationship with a customer.”

RTO models typically help a buyer with poor credit or in an increasingly expensive market bypass the traditional sizable down payment. The firm raises capital — whether it’s from VCs, private equity or pension funds — and then invests that in homes on behalf of renters and aspiring owners. The startup charges monthly rent and often an additional fee (an option fee or savings fee) to tenants that goes toward a down payment. The industry differs along a few lines. Some require a small down payment, and the formulas for monthly rent can vary, as can details on maintenance and move-out fees.

National statistics on the market size and number of such rent-to-own homes is hard to come by in a fragmented market. Plus, the homes involved in these programs are listed in property records under the owner/landlord. But the investment firm Thomvest counts at least 16 companies pushing rent-to-own and lease-to-own models, and research by the TechEquity collective estimates 36 million current homeowners have utilized alternative financing, which includes these models.

RTO is also a way for investors to diversify holdings and take advantage of a gap in the market, said Michelle Boyd, chief strategy officer for Terner Labs, a housing-focused initiative at the University of California-Berkeley. Investors can capitalize on the substantial demand to own and potentially make more than they would with a single-family rental. Boyd said it’s all the benefits of being a landlord, with extra-motivated tenants who are likely to stay long term — and no need to process a foreclosure if things go south.

“These companies make their money through rental growth,” said Marjorie Scholtz, founder and CEO of RTO Verbhouse, which says it guarantees locked-in home prices at the beginning of any customer transaction. ”They make money by raising rent and real estate appreciation. So, if they go out and buy it at $400,000, they’ll sell it to you at $520,000 five years later.”

Investors in recent years have seen rent-to-own as an extension of the booming single-family rental market and another way to serve similar customers, said Boyd. There’s also a social mission embedded in many firms, like Up&Up and Verbhouse, which seek to improve access to equity and wealth building for underserved communities.

Rent-to-own does have a sordid past, however, tied up with decades-ago schemes that took advantage of redlining and a lack of access to capital to trick poor renters. So-called contract buyers would rapidly evict those who missed payments, and a study found the practice robbed Black families in Chicago of billions of dollars in the 1950s and 1960s. Today’s RTO operators note they’re much less predatory, more choosy when it comes to working with credit-worthy buyers, and operate in a market with much more competition and consumer protections.

That historical association, as well as the size and scale of the transactions, and the fragmented nature of the U.S. housing market, make it hard to gain consumer trust, said Up&Up’s Hurst.

“It’s a tough concept,” he said. “And so that will forever be the thing that we’re going to try and nail on the consumer side.”

Many such firms explicitly focus on clients with poor credit scores and low annual incomes, and argue they provide a bridge to build up savings, improve credit histories and eventually buy. For example, Up&Up, which targets starter homes in stable neighborhoods in Sun Belt and Midwest markets, sees part of its goal as curtailing rising inequality. Customers who have rented from the firm for two years have seen the money they put into the program increase by 2.5 times, according to Up&Up’s own reporting, because they share in the equity growth in the home’s value (and the housing market had been on fire until recently).

The industry faces a number of challenging headwinds. Rising interest rates mean more pressure to increase returns. Plunging asset values are stemming momentum for acquisitions, threatening investor returns and causing many firms to hold back or halt expansion. The high cost of capital, or the need for outsize returns, means the model becomes strained when assets aren’t appreciating, said Scholtz. Up&Up is being very cautious when it comes to acquiring new homes right now, Hurst said, because buying assets and seeing a 10 percent decline in value is a problem to say the least. “The macro environment is really tough, there’s no sugarcoating it,” he added.

“The fundamentals are not in favor of the person living in the house,” said Terner Labs’ Boyd. “Prices are going up, the cost of living is going up, making it harder to eke out an arrangement that can also provide returns for private equity and venture capital investors. These deals just become more and more financial engineering.”

Modern RTOs really took root with Home Partners of America, which formed in 2012 in the aftermath of the Great Recession. Former Goldman Sachs exec William Young saw an opportunity renting to those shut out of homeownership, and soon was raising hundreds of millions to buy homes in dozens of markets. Beginning in the late 2010s, other startups began to enter the market.

“Essentially, everyone has a Home Partners in America model with a twist,” said Scholtz.

Within the sector, there have been persistent challenges in mastering the financial model: figuring out maintenance costs, rising rental rates, and even issues with transparency and flexibility around maintaining equity and investments if a customer leaves the program early. Boyd says it’s difficult to get good data on the success of these models, and, unlike the highly regulated mortgage market, there’s a lack of specific regulations governing these often complicated deals. Current market challenges may make finding the sweet spot between investor returns and renter satisfaction even more difficult.

Boyd foresees more regulation as the sector grows. Recently, there has been increased action by regulators, including a suit in Pennsylvania by then-Attorney General Josh Shapiro (now governor) alleging that Progressive Leasing misled consumers about rent increases. A November report by the TechEquity Collective, Rent To Own the American Dream, suggests a broad-based suite of transparency reforms for the industry, including clear terms for maintenance, listing success rates, and an ability to opt out of deals with investments intact.

Divvy has also been under fire, as an October Fast Company article notes, for skimping on maintenance and keeping customers’ option fees even after they moved out. A Divvy spokesperson noted that roughly half, or more than 500, Divvy customers have bought homes from the firm, and those who didn’t walked away with an average of almost $14,000 in savings at the end of three years. The firm has also introduced more flexible savings plans, including a set-your-own-rate option with no required monthly contribution.

Despite the volatility — and, for many RTO startups, a pause in expansion due to the cost of home acquisition — demand for such services is only expected to rise. Up&Up’s Hurst noted that the changing VC and tech markets have pushed investors to seek companies committed to careful growth and healthy revenue models. The potential upsides of getting this formula right — for the consumer, investor and startup — are still massive.

“There hasn’t been a breakaway company, even though there’s so much potential,” said Boyd. “But the financial returns are potentially very large, and Silicon Valley sees the opportunity.”