Top of the list: How will New York’s governor incentivize development? 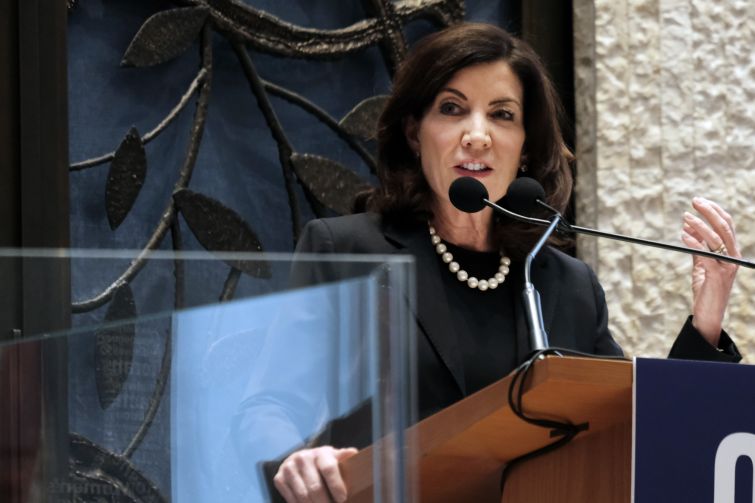 Gov. Kathy Hochul’s roadmap for creating 800,000 new homes in New York state over the next decade has elicited optimism from the real estate industry even as it annoys critics on the furthest ends of the political spectrum.

The proposal, laid out in Hochul’s Jan. 10 State of the State address, is also for now missing a lot of budgetary details and a clear path to legislative passage.

What is known is that the roadmap would require municipalities to expand their housing stock by 3 percent downstate and 1 percent upstate every three years. To meet those goals, Hochul proposed removing limitations on residential density, expediting environmental reviews, updating zoning laws, and providing tax incentives to build vast amounts of housing.

When towns don’t meet their targets, the state will intervene with a fast-tracked approval process to build more homes. “To do nothing is an abdication of our responsibility to act in times of crisis,” Hochul said. “Today, we say no more delay. No more waiting for someone else to fix this problem. … We will not waste this opportunity. We just need everyone and every community to do their part.”

For the real estate community, a focus on the state’s housing needs is long overdue.  Hochul noted that there were 516,000 fewer residential units than jobs downstate while New Jersey, Connecticut and Massachusetts have been building housing at a faster pace than New York. Home prices in the New York City region surged 50 percent since 2015, while rents jumped 30 percent, forcing half of the city’s tenants to plunk down more than 30 percent of their income to pay for their apartments.

“New York City’s housing supply crisis has gone from bad to worse,” said Zachary Steinberg, senior vice president of strategy for the Real Estate Board of New York, a trade association for the city’s real estate industry. “There’s no light at the end of this tunnel unless the public sector works quickly to advance policies to facilitate the new housing and below-market-rate housing production that New Yorkers desperately need.”

Not everyone is on board with the governor’s proposals. Progressive groups criticized Hochul for leaving out plans to strengthen tenant protections even as evictions steadily increased over the past year and rising rents forced tenants to spend more or move. Conservatives decried the governor’s emphasis on mandating suburban development as an attack on local control over zoning decisions.

“Hochul’s vindictive declaration of war on New York’s suburbs masked as a housing plan,” Lee Zeldin, former Republican gubernatorial candidate, said in a filmed response to Hochul’s address. “She doesn’t understand New Yorkers don’t want to be ruled by an emperor governor. People want to be in charge of the government, not the other way around.”

The details for how much Hochul’s housing plan will cost as well as what any tax incentives and targets would look like remain unknown. But, for the first time in many months, there’s optimism within the real estate industry that Albany is finally ready to tackle housing.

“People are finally acknowledging there’s a severe housing shortage. When the governor went through the stats, it was a little embarrassing to note that Boston is creating twice as much housing as New York,” Sheila Pozon, a land use attorney with Kramer Levin, said. “We’re just not producing enough.”

Hochul’s plan would require New York City to create half a million new units, a massive undertaking that real estate leaders believe is feasible under the right conditions. To meet those targets, Hochul is proposing to update zoning laws, remove restrictions regarding height and floor plate density, and expedite environmental reviews.

So far the measures have been met with little resistance among city leaders. Late last year, City Council members backed rezoning plans for new multifamily projects in Astoria, East New York and the East Bronx. There’s even been some second-guessing among Harlem officials after local opposition stymied a 915-unit development on 145th Street in the spring — only for the site to become a truck depot.

A few days before the governor’s address, New York Mayor Eric Adams released his own plan to turn vacant office properties into 20,000 units of housing after consulting with the Hochul administration. Hochul’s proposal would update zoning laws to allow commercial buildings built in the 1970s, ’80s and ’90s to be converted, potentially making 120 million square feet available for residential use.

“We’re blessed with a relationship between the mayor and governor that hasn’t happened for some time,” said Mitch Korbey, partner and chair of Herrick Feinstein’s land use and zoning group, referencing the longtime rivalry between Andrew Cuomo and Bill de Blasio. “I shudder to think how these plans would roll out without a dialogue between Albany and City Hall that you now have.”

Even though real estate owners are eager to break ground, few have been willing to move ahead without tax incentives to offset the costs. Foundation filings declined 60 percent after the 421a tax abatement for multifamily projects expired in mid-June 2022, from 411 in the first five months of 2022 to only 165 fillings between June and November, according to a Real Estate Board of New York report.

Hochul teased several options including low-income tax credits and an abatement that would replace 421a, although specifics are not expected to be revealed until the state budget draft is released in the coming weeks.

“The governor is going to really try to find a way to get a replacement, but there needs to be a subsidy; otherwise we’re not going to get to 800,000,” Pozon said. “You’re not going to be able to get the financing.”

Getting the suburbs to build thousands of homes is another matter entirely.

For decades, the state did little to control exclusionary zoning practices on Long Island or in Westchester County and the Hudson Valley. Suburban municipal leaders blocked multifamily developments as their representatives in Albany stymied bills setting state standards for zoning and allowing accessory dwelling units.

Now Hochul is wresting power back from municipalities with proposals that would encourage new construction near transit hubs and fast-track multifamily projects in localities that don’t meet her targets.

That’s a welcome development for many this year.

“Zoning is a state power in the state constitution,” Moses Gates, an urban planner with the not-for-profit Regional Plan Association, said. “It is a responsibility given to a municipality to be used responsibly. Part of that is making sure there are enough housing options for people in the municipalities and that they are meeting the fair share in the region.”

Under the governor’s plan, towns would be allowed to rezone neighborhoods within a half-mile of a Metropolitan Transportation Authority rail station for denser levels of housing. In addition, the state would provide $250 million for wastewater infrastructure and parking structures to support new development. Another $20 million would help towns beef up their planning offices and collect housing data.

John Armentano, a land use attorney at Uniondale’s Farrell Fritz, said Long Island towns would be more likely to favor new construction projects if the state can help foot the bill for sewer and water lines.

“A lot of villages are looking at expansion projects, and a new sewer district will make it happen more easily,” Armentano said. “Sewer districts drive development and density. Traffic and poop. That’s how everything runs.”

The governor will have to work with an increasingly polarized legislature that has shown it is unafraid to challenge her decisions.

Before Hochul even gave her address, lawmakers were demonstrating in Albany against her pick for chief judge and in support of measures to halt evictions and raise taxes on the wealthy.

Manhattan Assemblywoman Linda Rosenthal, who became the new Assembly Housing Committee chairwoman this month, has been averse to lifting the cap on floor-area-ratio zoning requirements that would lead to taller, denser housing. She said the state must focus on adding more supportive housing, expand voucher access, and eliminate barriers for housing protections in addition to the governor’s goals.

Progressive lawmakers have opposed replacing the expired 421a tax abatement for new housing construction, which developers desperately want. And Hochul’s plan to compel municipalities to build more housing near train stations and update zoning rules have not gone over well with conservatives.

“Gov. Hochul’s housing proposals would be a disaster for our community,” Edward Flood, a Republican assemblyman from Port Jefferson, tweeted. “Her goal is to turn Brookhaven into the Bronx by removing local control of zoning laws and force 3 percent growth in downstate areas. Hard pass!”

Real estate insiders believe the legislature will adopt some of the governor’s proposals to stimulate housing growth but will put their own tweaks on them. That could involve increased levels of funding for supportive housing, new language on tenant protections, and broader levels of affordability in any tax abatements for the measures to pass.

“The legislature will have requirements for affordable housing, which is not in the zoning for conversions and will go beyond what we currently permit,” Korbey said. “There’s ample precedent for it working.”

Once the governor puts out her budget proposal later this month, real estate lobbyists will turn their focus to pressing legislators to adopt a litany of proposals that could lead to hundreds of thousands of new units.

“The state legislature has taken several actions in recent years purportedly to address the housing crisis. Yet that crisis has only gotten worse,” Basha Gerhards, REBNY’s senior vice president of planning, said in a statement. “We hope the legislature will work with the governor to enact common-sense policies that produce more of the rental housing New Yorkers desperately need.”