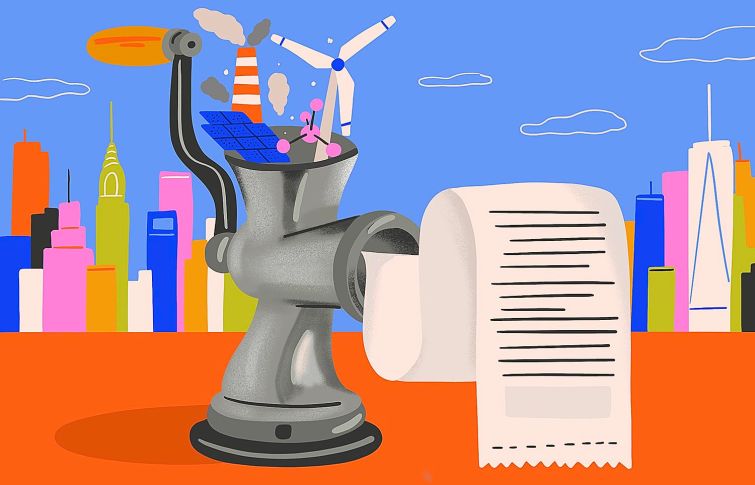 Few emissions standards for most larger New York City buildings take effect in less than a year, and the scramble is on to set the rules for compliance.

The biggest sticking point appears to be what building owners can do other than make major structural changes to their properties to offset pollution, including buying credits that show an owner is using renewable energy sources such as wind or solar.

The stakes of this final stretch are high. New York City building owners could routinely be forking over hundreds of millions of dollars to the regulators by the end of the decade even if they make improvements to shrink their properties’ carbon footprint, a real estate industry analysis found.

Starting next year, the sustainability rule known as Local Law 97 will require that most properties over 25,000 square feet meet greenhouse gas emissions and energy efficiency limits or face annual penalties. The law, which passed in April 2019, is crucial to help the city meet its sustainability goals of reducing carbon emissions among large buildings 40 percent by 2030 and 80 percent by 2050.

What’s more, even if property owners invest in modest energy efficiency improvements, they could nevertheless pay hefty fines because their buildings may still be noncompliant under the law. If they cut building emissions by 15 percent, some 11,400 sites would need to pay a total of $576 million each year. If they slashed emissions 30 percent, nearly 8,000 buildings would still have to pay about $300 million each year, the REBNY report estimated.

Finally, real estate leaders believe the law as it is currently designed would not help the city meet its climate goals.

“Even if buildings take meaningful steps to comply and use the tools provided by the law, owners will still be unable to meet the emissions limits and will instead pay hundreds of millions of dollars in annual penalties,” Zachary Steinberg, REBNY vice president of policy, said.

Environmental advocates say the penalties are the point and give deep-pocketed real estate owners a reason to follow the law.

“The penalties are part of what is creating the large movement for upgrading the city’s large buildings toward energy efficiency,” said Pete Sikora, climate and inequality campaigns director for New York Communities for Change, an advocacy group. “Lots of housing laws that are on paper are not enforced in the real world, but what we really want is building owners to comply with the law. Inevitably some won’t, but the requirements the law states are reasonable.”

Some building owners may not even be aware the law exists. YuhTyng Patka, a real estate attorney at Adler & Stachenfeld, has encountered residential property owners who have not upgraded their buildings because they did not know about the city’s regulations despite their being four years old. It doesn’t help that the city paused, for five months last year, a loan program known as PACE that would help provide financing for property owners to pay for retrofits and other costly energy efficiency improvements.

“My clients are worried about costs first and foremost,” said Patka, who runs Adler & Stachenfeld’s Climate Mobilization Act task force, after the 2019 suite of laws the city passed that includes Local Law 97. “The clock is ticking and time is running out. Before you know it, you might miss the deadline. I hope for the sake of the owners that they’re not reading about it for the first time.”

The rule-making process to regulate building emissions has drawn intense lobbying among multiple interest groups. One key component includes renewable energy credits (RECs),  which would allow property owners to buy credits to offset their buildings’ electricity use if they can’t meet the city’s emissions standards by next year’s deadline.

Property owners have been pushing the city against limiting RECs while also requesting the state create a tax abatement and incentive program to defray costs and allow the city to direct fines collected from Local Law 97 toward decarbonization investments.

“We’re trying to make the case that we need as many tools as possible to make compliance more achievable for more buildings,” Daniel Avery, director of policy at REBNY, said. “We don’t think the city should restrict RECs any further because everybody is going to be out of compliance and that’s a tool we’ll need.”

But several public officials, environmental leaders and even landlords want to cap the credits so building owners can’t just buy their way out of following the law. A city advisory board charged with helping the Department of Buildings shape regulations for Local Law 97 suggested late last year that carbon credits be limited to 30 percent of a property’s overage, among other recommendations.

So far, Mayor Eric Adams’ administration appears to be listening to both sides while it’s currently in the final stages of setting rules for Local Law 97. Compliance guidelines from the Department of Buildings released in December would allow owners to purchase RECs and limit those purchases to offsetting only pollution from electricity. There is no 30 percent limit as of yet.

“A lot of advice we gave throughout this process ensured this work would be favorable to the growing New York City economy and drive people who want to come to New York to prove the business case for investing in this work,” Dana Schneider, director of energy and sustainability at owner Empire State Realty Trust and member of the Local Law 97 Advisory Board, said of the board’s work in general.

Advocates hope the rules do not contain loopholes that would allow building owners to use unlimited energy credits to show they made a good faith effort without having to meaningfully reduce carbon emissions.