It’s a shift that favors smaller, nimbler brokerages too 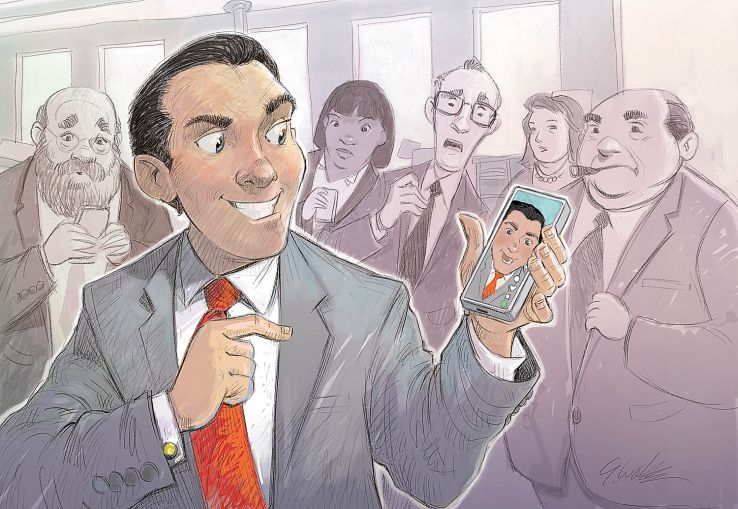 “[The buyer] said, ‘I’m just reaching out to you because I see you have a French bulldog and I also have a restaurant I want to sell,’ ” Inserra said. “And I took that deal and got it done.”

Or, a select few brokers are taking over it.

Commercial real estate influencers like Zelnik & Company’s Inserra, SVN Desert Commercial Advisors’ Eddie Gonzalez and Arvo Realty Advisors’ Tiffany Ryland have amassed followings from 16,000 to 45,000 on TikTok. That may not seem like much compared to the millions that watch Charli D’Amelio or Khaby Lame, but the brokers say it’s enough to get deals flowing.

Arizona-based Gonzalez uses the more than 1,000 videos he’s made for his 45,200 TikTok followers to market retail space for lease, or advertise to potential tenants in his state. And when he sells a building, he makes a video about it, and then texts that video to nearby property owners. And, whether curious or just confused, they usually give him a ring, he said.

“When I first started it was you make this many cold calls, which leads to a coffee meeting, which leads to hopefully another meeting, you go in for the proposal and then hopefully you get the listing,” Gonzalez said. “Now, [landlords] watch my stuff and I still do cold calls, but most of my calls are inbound calls.”

For the Texas-based Ryland, it was her 16,200 followers on Tiktok and 8,000 or so on Linkedin that made the co-owner of Harold’s Shrimp & Chicken get in touch with her to open a location in one of her Houston buildings at 2555 Westheimer Road, and potentially two more.

While social media has helped the trio score plenty of deals, the biggest benefit to an active TikTok account, or a side gig writing inspirational posts on LinkedIn, is something not often associated with the internet: trust.

“You need to be the known, liked and trusted guy,” Gonzalez said. “[Landlords] can go to my account and see what I’m all about. And they can decide if they like my style and to bring me in and have me sell a building, versus me going through a two- to three-year [relationship-building] process.”

For example, Gonzalez made a friend at the gym who discovered he was a broker through his Instagram, and then enlisted him last year in selling the 21,000-square-foot office building at 4801 East Mcdowell in Phoenix for $2.6 million and acquiring the building at 4625 South Wendler Drive for another $8.8 million, he said.

Ryland calls her Instagram account her “pictorial resume” — a way for potential partners to see whether they’d be a good fit for business. After all, brokers with an online presence get to show off something commercial real estate isn’t well known for: personality.

“Everybody goes to fit in. Like, I’m a commercial broker, I’m gonna fit in this way, dress this way, talk this way and carry myself this way because that’s what commercial real estate brokers do,” Inserra said. “But the way to get attention is to be yourself and be different.”

Not everyone is a fan of a big personality, and the brokerage community hasn’t completely accepted TikTok — or any social media platform — as a potential source of deals, said Cory Zelnik, founder and CEO of brokerage Zelnik & Company.

“What I’ve seen, because I’m doing work all across the country, [social media] is a huge plus,” Zelnik said. “I get a lot of ribbing in good fun from the old school guys about my social media, because either they’re not doing it, or they work at larger companies that don’t allow for it.”

Azor Advisory Services founder Beth Azor initially laughed off an intern at her management and development firm who suggested using Facebook to score a lease at one of her shopping mall properties in 2014. But just last year, she used Facebook and Instagram direct messaging to secure about 45 leases at Bedrock’s Tower City mall in Cleveland before the February 2022 National Basketball Association All-Star Game, Azor said.

And she expects leasing via social media to become even more popular as established brokers retire.

“We’re older,” Azor said. “I think as my generation starts to retire, and the younger generation comes in, things like proptech, social media and the value of it will start to become more involved in our industry.”

That change is already well underway. Cushman & Wakefield’s Ken Ashley, a broker based out of Atlanta, started a commercial real estate influencer organization, dubbed CREi, in 2020 to help the social media stars of the sector network and learn from each other. He sees social media as part of the industry’s future, especially after the pandemic’s push for online work.

“Developing influence and reputation in your market, whatever that is, is hard work,” Ashley said. “We believe, in a post-COVID world, that that kind of marketing is more important than ever. It’s great if you can pick up clients at the golf club. But a lot of people are thinking differently about marketing after spending two and a half years on Zoom.”

In the future, a broker’s personal brand may be more important than the company they work for, something residential brokers like Ryan Serhant have known for years, Azor said. But, unlike the residential world, commercial real estate is an industry with stubborn traditions and an emphasis on the party line, not individual stars, Ryland said.

“Residential has just been so accustomed to allowing agents to be individuals, as opposed to having to wear the brand and having to wear the flag,” Ryland said. “Whereas commercial, it’s one band, one sound, and we do things one way here. And that’s it.”

But even old dogs can learn new tricks (or have their kids teach them a few).

Inserra got started on TikTok making funny videos with his daughter. Zelnik’s daughter grades his posts on a “cringe factor” (the cringier the better, he said). And Azor apologized to her social media-savvy intern, who scored a lease with a chocolate shop after just a few weeks of Facebook messaging — a lease that Azor had been after for three years.

Broader acceptance of social media platforms also poses both a challenge for big brokerages and an opportunity for young professionals, Ryland said. Being a successful influencer requires consistent posting and a lot of personality, something large brokerages don’t always allow, Azor added.

For young brokers, particularly people of color and women who have been sidelined by the male-dominated industry, social media represents a chance to connect with other professionals and get a jump-start on prospecting deals, Ryland said.

Social media is not without its risks. Ryland said she had too many unqualified tenants reaching out to her thanks to her online presence. Commercial Brokers International’s Austin Grant said that while his 257,100 followers on TikTok help him network, he focused too much on TikTok and not enough on cold calling.

“It’s a tool — it’s not a cure,” Grant said. “People that use social media need to understand that success isn’t going to happen overnight, and that you can’t completely give up your other forms of business development.”

It’s also a tool that comes with a lot of attention. Ryland, Grant, Inserra and Gonzalez have all been recognized in public or at conferences by strangers. After being recognized at a public speaking club and taking a selfie with some fans, Gonzalez even had a friend accuse him of paying the strangers to ask for his photo.

And Ryland, on a particularly bad hair day, said she got spotted at the Home Depot by a fan of her Instagram account.

“I was, of course, in the bummiest outfit, my messiest bun, and I said, ‘If you ever tell anyone you saw me like this, I will deny it,’ ” Ryland said.

So, despite their niche following, these professionals are getting seen. And that recognition is worth more than all the naysayers, Inserra said.

“Almost every time I go on tour, there’s another broker there, and I don’t know them, and they always say, ‘I see all your videos,’ ” Inserra said. “I’m appreciative of it because it validates what you’re doing. This is actually working. It’s hard because so many people in this business have not been so supportive of it.”