The city's leasing market has long depended on tech. Now, that sector is struggling, and crime isn't helping. 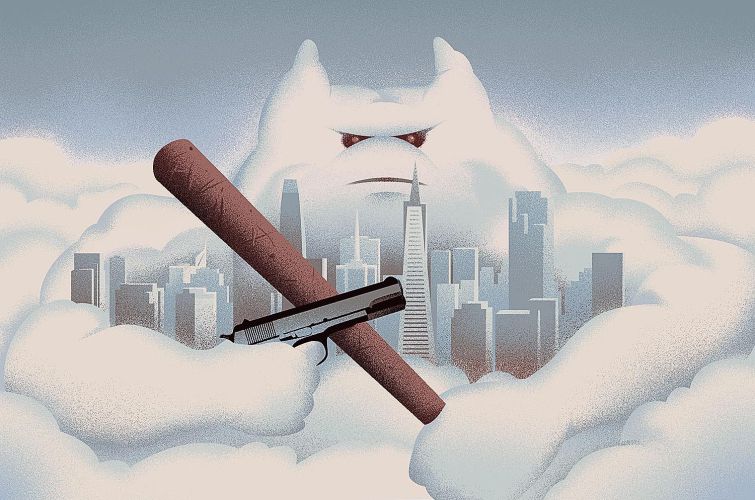 The fog around the fate of San Francisco’s office market hasn’t lifted. But the visions coming into focus are far from positive.

As an office market slowdown deepens across San Francisco in the back half of 2022, fears of a long-term slump in commercial real estate have calcified, sparking thoughts of further downtown decline. Ongoing challenges from persistently high homelessness and a well-covered spike in crime that led to the June recall of San Francisco’s district attorney haven’t helped, either.

There’s been a plethora of commodity office space coming on the market that won’t be leased anytime soon, said Nick Slonek, a principal at brokerage Avison Young. He defined “soon” as the next 12 to 24 months. Where there were once 20 tenants in the market looking to lease 100,000 square feet or more in the market, there’s probably a half-dozen now, and landlords are aggressively playing the market, offering extensive and generous concessions in a bid to salvage their rental rates.

“We have to take it in the shin right now,” Slonek said.

San Francisco finds itself an outlier in a national office exodus: too focused on one industry (tech, representing 65 percent of office tenants), too expensive, and too filled with firms enacting generous remote-work policies. Stats, which are voluminous — 42 percent office utilization, a 31 percent vacancy rate, 20 percent of downtown space vacant, and 20 million square feet of availability, per Avison Young research — tell only part of the story. A JLL analysis predicted that office vacancies may hover above 20 percent until 2026, when the “major shock” of remote-work policies wears off, and a report from the Institute of Taxation and Economic Policy predicted that San Francisco’s commercial property values could decline 43 percent.

“It’s an emotional blow to everyone who’s trying to pull for the city,” Bergeron said of the once fully occupied tech tower. “One of the greatest cities on the planet is now on the ropes.”

Big tech and startups alike have been pummeled by recent economic news; a string of terrible third-quarter earnings reports have humbled giants like Alphabet and Meta, while the money spigot has turned to a relative trickle. Most major employers in the city are trying to get everyone back in the office but haven’t been successful, said Colin Yasukochi, executive director of CBRE’s Tech Insights Center in San Francisco. They’re also cutting space, and aren’t afraid that reducing their footprint during a lease expiration means they’ll never get it back; there’s plenty of room to grow.

“The real estate market has a lot more excess to burn off this time around than it did during past downturns,” Yasukochi added.

A lot of tech’s travails can be traced to a funding cliff-drop. National venture capital funding has decreased from a high of $66 billion in the last quarter of 2021 to just $16 billion in the third quarter of this year, said Peter Walker, head of insights at Carta, a firm that due to its focus on capitalization table management and valuation software has data about roughly 28,000 companies and the state of the market.

San Francisco still reigns supreme and maintains its significant portion of that total, but such a precipitous decline in dollars has left startups pinching pennies to extend their runway. Of the more than 200 members of the last class of startups that entered the prestigious Y Combinator tech incubator, many based in the Bay Area, a vast majority offer remote-work options.

“It basically looks like, due to the massive shift in the way people work, Class C and Class B offices are going away,” said Blake Roskelley, an engineer at developer Clark Pacific who says it’s a struggle to build new office space. “Even existing Class A is struggling. The future of office is slowly unfolding before us. You see big tech firms trying to lure people back, and it appears the employees are winning.”

Yasukochi has found that coworking spaces aren’t expanding their footprints in the city, but they are being used more, as other companies shrink their real estate spend. There’s a few new startups like Codi, which offers office timeshares and more flexible leases for tenants, popping up to make vast expanses of Class B space more attractive and marketable. But Savills’ Bergeron calls those concepts a Band-Aid for what could be considered a puncture wound.

“There hasn’t been a single company announcement or point in time, a real shoe-to-drop moment, for the office market here,” he said. “It’s been a slow, confusing process for most operators to try and solve. How do you predict and plan real estate when there’s such a gap of data: who wants to come back, how often are they going to come back, how many employees will we have in a year, what’s the remote policy going to be?”

Big owners caution that downturns aren’t new, and that long-term strategies will prevail. Albert Behler, chairman, CEO and president of Paramount Group, a leading owner of office space, said in a written response to Commercial Observer that the firm’s San Francisco portfolio continues to benefit from the flight-to-quality trend. Smaller, older assets have faced more headwinds than modern trophy assets such as One Market Plaza, as these assets often lend themselves to small and midsize tech tenants that have not fully embraced returning to the office yet.

Behler also sees some hope of a return. Since Labor Day, midweek office occupancy at Paramount’s San Francisco holdings — including that 1.6 million-square-foot One Market Plaza — has reached 50 percent of pre-pandemic levels versus just 13 percent in 2021.

Some have also spoken about venture capitalists holding back with additional dry powder, waiting for the right opportunity. Carta’s Walker says that’s a misreading of the market. He sees the stalled IPO market, which means less exits and fewer paths for investors to cash out, as a “cinder block” weighing down the ecosystem: fewer major investment rounds, less certainty, and more sitting around trying to extend funding until the market picks back up, all of which means fewer office leases.

Carta data shows far fewer seed rounds for early startups — meaning it’s harder to breed the unicorn tech firm that will be a massive tenant of the future — as well as a 40 percent drop in the amount invested in late-stage D funding rounds. The hyper-growth startup era has been replaced with more due diligence and choosiness from investors.

And San Francisco’s city leaders haven’t unveiled plans or presented immediate optimism for the office market. Mayor London Breed recently told Bloomberg that the city needs to reinvent itself and attract green tech and life sciences tenants, a nod to a growing segment of the economy, but not one that can likely fill up floors and floors of empty space with costly and complicated office-to-lab conversions. Breed’s 36 percent approval rating in mid-October reflected persistent homelessness and public safety issues, which aren’t helping to bring tenants back downtown.

“We need someone who’s actually run a balance sheet before, who knows what a P&L is, and who understands what it takes to run a business here in San Francisco,” Slonek said. “With so many inhibitors to being successful, even the most successful people are struggling with it. You need to just have a better climate. Right now, we have no clue.”

The longer the malaise lasts, the more months VCs play it safe and the more lease renewals come up with firms looking to instead sublease or downsize, further extending the office slowdown. If the economy bounces back and the IPO market reopens,  though, San Francisco could throw off that cinder block, which Walker believes would create a sharp rebound.

“San Francisco is going to come back, it’s a matter of when; it’s never been in the doldrums long,” said Slonek. “But we just don’t know how long it’s going to be.”

This feature originally appeared as part of the Tenant Talk newsletter. Please consider subscribing to this and other Commercial Observer newsletters here.