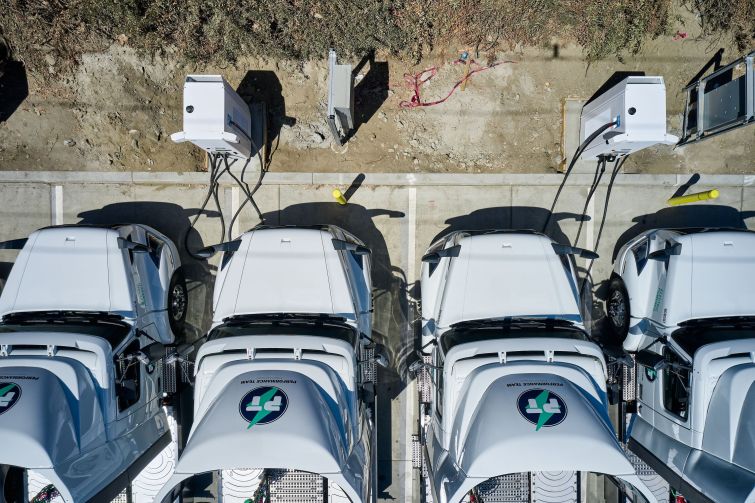 It’s not just the passenger vehicle market that is increasingly going electric: Commercial vehicle operators are also making the move to zero-emission electric trucks for their hauling needs, spurred on by both government regulations and private sector sustainability targets.

That’s why one of the largest industrial real estate landlords in the world, Prologis, is investing in new electric vehicle infrastructure meant to ease the transition to net zero for its supply chain and logistics tenants. This week, Prologis unveiled that it has installed electric truck charging stations at two Los Angeles County facilities occupied by warehousing and distribution company Performance Team, which is in the process of converting its trucking fleet to electric vehicles.

The charging stations were designed and implemented by San Francisco-based landlord’s Prologis Mobility division, which provides Prologis’ tenants and other logistics clients with transportation and fleet management services. In the case of Performance Team, Prologis Mobility’s electric truck chargers will allow it to charge up to 38 vehicles simultaneously across its two facilities — with 22 chargers at the Prologis-owned Commerce Transport Center in the city of Commerce, located nine miles southeast of Downtown L.A., and another 16 at a non-Prologis-owned warehouse in Santa Fe Springs, nearly 14 miles southeast of Downtown L.A.

The charging infrastructure will be exclusive to Performance Team and its fleet of Volvo VNR Electric heavy-duty trucks, which are fully electric vehicles with battery ranges of up to 275 miles, depending on the configuration. In the case of the Commerce facility, Performance Team is deploying new, second-generation Volvo trucks with a range of “220 or so miles,” Prologis Mobility global head Henrik Holland told Commercial Observer.

Holland noted that the “state-of-the-art” chargers will allow Performance Team to recharge the newer vehicles, which are equipped with larger batteries, “in the same amount of time” as it took their older counterparts — usually around 45 minutes to go from a “15 to 20 percent state of charge to 80 to 90 percent,” he said. That will help the distribution company more efficiently recharge and manage its fleet of electric trucks as they shuttle goods between its warehouses and major supply hubs like the ports of Los Angeles and Long Beach.

“This private infrastructure is available to them without having to wait for charging times and queues that would mess with their logistics operations,” Holland said. “When you have electric delivery vehicles that are spending a lot of time at these warehouses, it’s the logical place for them to charge — they don’t have to deviate from their optimal route. From an operations perspective, this configuration is extremely efficient.”

Prologis Mobility designed and built the two charging stations, which have a combined 4 megawatts of charging capacity, in the span of a year, according to Holland. While he declined to provide financial details on the costs incurred, he said such projects are “generally in the millions of dollars [to build].” Prologis, he added, is “providing this as a service” to Performance Team on a price-per-kilowatt basis, while also offering a software dashboard that allows the company to track its electric vehicles and the state of its charges.

Performance Team, which is owned by Danish freight giant Maersk, has purchased more than 400 electric trucks this year for use in North America, a spokesperson for the company told CO — with its shift to electric transport vehicles motivated by Maersk’s goal of reaching net-zero emissions across its worldwide business by 2040. In addition to such sustainability targets, supply chain operators are also being driven toward electric vehicles by government regulators. In California, a recent mandate will require that all new cars and light-duty trucks sold in the state be zero-emissions vehicles by 2035, with the same rule applying to heavy-duty trucks by 2045.

“Over the past few years, we’ve set up this business in response to what we’re hearing from our customers,” said Holland, who joined Prologis last year after a lengthy stint with oil giant Shell, for whom he most recently served as chief operating officer of its electric mobility division. As such, he brings not a real estate background to Prologis — which owns roughly 1 billion square feet in 19 countries around the world — but one well versed in emerging clean-energy models that promise to become more prevalent in the coming years.

“These are the first of what we hope will be many projects we’re delivering for customers,” Holland said, noting that Prologis Mobility currently has “about 50 projects in active development” across the U.S. and Europe. “What’s unique about this is the business model; it’s super easy for customers to switch [to clean energy infrastructure] without investing upfront capital. … We’re in a position to help some of the largest companies in the world to make this transition a reality.”