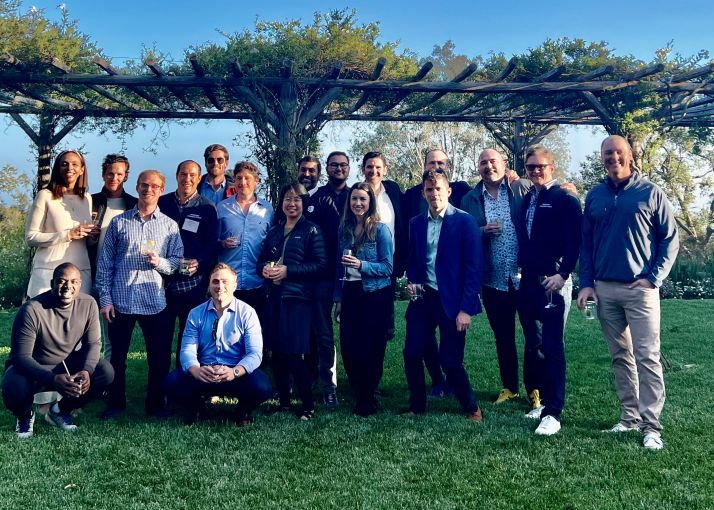 A Founders Forum gathering hosted by Procore in Santa Barbara, Calif. Riggs Kubiak, who had the idea for the gatherings, is at far right. Photo: Procore

Is this some new age-y self-help retreat or just another corporate conference getaway mosh pit?

No, it’s Procore’s Founders Forum, a kind of farm system in which some of the contech giant’s startup partners meet in the company’s California headquarters to sample all-of-the-above business advisory goodies in an intimate and supportive setting.

The idea for the Founders Forum came from Riggs Kubiak, senior vice president and entrepreneur in residence at Procore, and himself a successful entrepreneur whose contech startup, Honest Buildings, was acquired by Procore.

“About a year ago we started kicking this idea off and making it happen,” said Kubiak, who runs the forum. “What gave me the idea was spending a decade as a founder and an entrepreneur, leading up to getting acquired by Procore. I still feel like I’m a founder and I’m still an entrepreneur, and company building is really hard.

“From the outside looking in, it’s like everything’s rosy with startup companies. In proptech, it’s, everything’s good, everyone’s crushing it all the time, you’re raising money and hiring great people, and there’s great press releases, and everything’s gravy. But, on the inside, as the founder and CEO, it’s hard.”

Looking to help founders who engage the most with Procore’s platform of 350 integrated companies, Kubiak held the first Founders Forum with some 15 participants in April. He plans to hold the three-day gatherings twice a year, with the second scheduled for December.

The power of in-person relationship building and business development is clear to Kubiak.

“When I was building my business, the most impactful conversations were with entrepreneurs, and specifically founders, who had either done what I was trying to do, generally speaking, or were in the same sector,” said Kubiak. “It was just incredible how much knowledge you could glean and how much empathy was there with people who truly had been through the fight and were willing to help you out.”

Founders Forum found another champion in Tooey Courtemanche, the CEO of Procore, who took time to speak with the participants, as did the company’s head of sales.

Referring to his decision to back Kubiak’s idea as a “no-brainer,” Courtemanche said, “Even if this idea had been floated before, we never had a Riggs Kubiak who could actually execute on it. He is a successful founder, which I hold in the highest regard, and he was willing to do this. I thought, ‘How in the world did I win the lottery by being able to celebrate our partners, as well as to help promote their business?’ It just made perfect sense.”

If that wasn’t enough corporate kumbaya, the forum’s participants are more than happy to talk about how good the kool-aid tasted.

“A lot of us were at different stages of our journey and we were all founders,” said John Fohr, CEO of TrustLayer, an automated insurance verification startup, of the forum’s participants. “And that allowed us to be much more transparent and to share a number of the challenges that one has when trying to build something from scratch.”

Part of the forum’s benefits is that it comprises an intimate group of peers in the Procore network and an ongoing exchange among them even after it’s over, said Fohr, whose company began in 2018 and has raised a Series A round for total funding of $21.7 million.

“You’re brought into the family, so to speak, and, like most things, it is what you make out of it,” he said. “So, immediately after, there was a Slack chat and WhatsApp group, a very small focus group that has heavy construction-use cases.”

Like his fellow forum attendees, Or Lakritz, co-founder and chief technology officer at StructShare, a digital procurement and material management platform built for specialty trade contractors to streamline and digitize the procurement lifecycle, found it easy to learn of and join the group.

“What guided me to it was, first of all, our good partnership with Procore for a year now, which invited me to the new initiative,” said Lakritz. “I thought that it would be a great initiative from the beginning. What can be bad about meeting great founders at the industry leader’s headquarters?”

For Lakritz, the time spent at the forum yielded a lot of practical and personal takeaways.

“Mostly interacting with like-minded founders from different places in the world, different stages, different aspects and niches in the construction tech industry,” said Lakritz, whose late seed round startup was founded in 2017. “We had a lot of workshops with Procore leadership in different aspects of the business, which enabled us founders to ask questions and to share challenges.

“In addition, having a friendly happy hour together to get connected and build relationships. I must say that the main thing was building relationships. Since then, we have a group of founders who are really good friends that are still in contact helping one another.”

Jeevan Kalanithi, CEO of OpenSpace, an AI-driven photo documentation tool that creates navigable photo representations of job sites, is a more experienced entrepreneur, but he also benefited from the forum, he said.

“When I think about the founders Riggs put together, he did a good job of getting companies at a variety of stages,” said Kalanithi. “OpenSpace is still a startup, but we’re on a sort of later end of the spectrum for that group. We did our Series D this year and that was $111 million.

“Fundraising is good, but it’s not the best measure of growth. We were there with growing companies of 250 people at the time, and then there were some companies that were a bit bigger than us, and lots that were earlier in their journey. So I didn’t view it as an accelerator of a bunch of small companies at the seed stage, but more of a forum for different companies serving similar customers to help each other out.”

The forum gave Kalanithi a better sense of how to judge issues facing a startup, he said.

“Hearing from executives from Procore, obviously a bigger company than any that attended, what their challenges are, was super valuable,” he said. “It lets you calibrate, ‘Is this challenge I’m facing par for the course or is it something I should really be worried about?’ That’s really helpful to hear from other people.”

Procore CEO Courtemanche was surprised and pleased at how open and mutually supportive the founders’ conversations were at the forum.

“I think what struck me most when I got a chance to just sit down with them was how vulnerable they were willing to be about what they don’t know and about what help they can use,” he said. “Riggs’ vision around helping them to build great businesses is way more than just the tactics of being a founder or CEO, it’s how you build a great sustainable culture that drives business outcomes.

“They were very open and vulnerable,” he added about the participants. “A lot of curiosity about, ‘Hey, I’m feeling this or I’m feeling that.’ I told a story about a terrible case of imposter syndrome that I personally had gone through, and all of them were like, ‘Oh my goodness. That unspoken fear we all have and the fact that you were able to overcome it, puts it into perspective and is helpful to us, too.’ ”

While the forum founders said they had gotten, and continue to get, a lot from the program, Courtemanche was effusive in expressing how much value it provided to his own company.

“I’m going to give you the altruistic answer and then the business answer. We actually do believe in giving at Procore. We think that we’re here because people took the time to invest in us to do these sorts of things for us.

“From our standpoint, we’re a work platform solving a ton of the core problems that are related to construction,” Courtemanche said. “These folks address second-tier problems. They make the Procore experience for our customers seem much more broad than it actually is because our customers are interacting with their solutions on our platform. So it’s a force multiplier where we can be a single source of truth for our customers across all phases of construction.”

Getting to know the startup founders through the forum provides Procore with added intelligence should an acquisition opportunity arise, Courtemanche added.

“It’s an opportunity for us to really get to get to know the leader of the company at a very deep level,” he said. “We know the leader, tech stack, position on culture, and ability to hire. We know so much about them that we could partner with them much more quickly, because we have such a deep relationship. So it’s investing in the future really.”

CLARIFICATION: This article was updated to reflect Riggs Kubiak’s correct title at Procore.