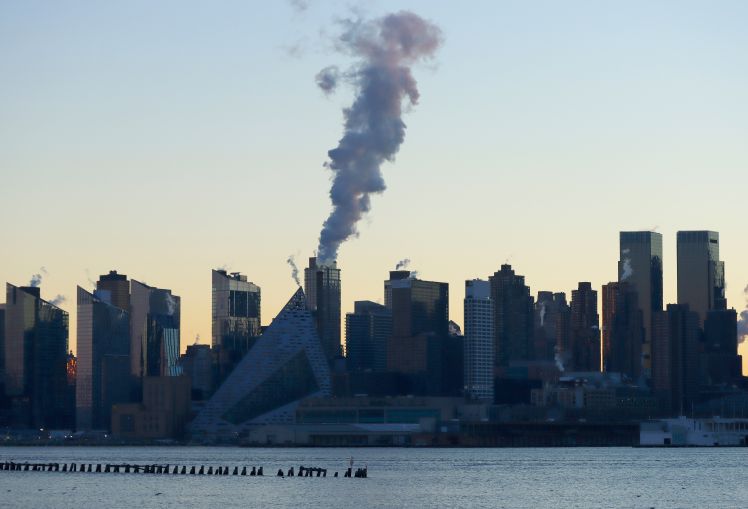 An emission comes out of a smokestack on the west side of Manhattan as the sun rises in New York City on January 16, 2022, as seen from Weehawken, New Jersey. Getty Images

A group of elected officials and residents want the city to limit the number of renewable energy credits landlords can buy to become compliant with New York City’s upcoming carbon reduction law.

The rule set that the New York City Department of Buildings (DOB) provided as required of them by Local Law 97 in October allows landlords the option to purchase the credits to help their buildings fall within the law’s guidelines without cutting their carbon emissions and avoiding fines. But New York City Councilman Lincoln Restler and New York City Comptroller Brad Lander asked the city to revise the measure, with Lander releasing a report Monday morning calling on the DOB to cap the emissions at 30 percent of overages to prevent owners from buying their way to compliance.

“New York City’s Local Law 97 is the most ambitious building retrofit law in the country, but it will only work as intended if DOB amends its proposed rules to limit the pay-to-pollute ‘Renewable Energy Credit’ loophole and requires buildings owners to reduce emissions onsite,” Lander said in prepared remarks. He also wants the credits to apply only to electric use overages and not gas use overages, according to his statement.

Local Law 97, passed in May 2019, requires owners of buildings 25,000 square feet or larger to reduce emissions 40 percent by 2030 and 80 percent by 2050 through more efficient use of building systems or total refits. Landlords who don’t comply will face fines.

The new rule set released in October also provides landlords with guidelines as to how to report emissions for multiple buildings on one or multiple tax lots, as well as the mathematical formulas for calculating a building’s annual greenhouse gas emissions limit.

“The use of RECs is a requirement of the law, and it is not restricted in the law. Despite that, we are studying the RECs issue with our government stakeholders,” DOB deputy commissioner for sustainability Laura Popa said during the hearing. “We are going to be proposing appropriate limitations in the future, and determining the appropriate legal mechanism to make that happen.”

While Lander took a more mild tone in calling for DOB to cap renewable credits in the rule, Pete Sikora, climate and inequality campaigns director at New York Communities for Change, was more alarmed at the potential for the credits to undermine the law entirely, an opinion shared by many speakers during the city’s public feedback session Monday.

“The [renewable energy credits] rule would gut Local Law 97. It would cost the city tens of thousands of jobs and massive pollution cuts,” Sikora said. “If you limit [renewable energy credits] use to electricity pollution, that is pollution generated from electricity use … as well as only up to 30 percent of the pollution generated from a building over its limit. That would ensure that the law fulfills its purpose and its spirit, and it must be done correctly. You must do that or we will lose the world’s most important climate and jobs law.”

The Real Estate Board of New York (REBNY) did not mention the credits specifically in a statement provided to Commercial Observer, but the board was not convinced that the DOB was giving building owners enough resources to decarbonize their property as the economy turns more bleak.

“While the proposed rules include several positive features, the rules also mandate even more stringent emissions standards without providing the tools that will help owners reach those targets,” Zachary Steinberg, REBNY senior vice president of policy, said in a statement. “More must be done to help building owners achieve emissions reductions, particularly in this economic climate of inflation, rising interest rates, and uncertainty about the future of the city’s economy.”

Their full testimony can be read here.

A final version of the rule set to Local Law 97 will need approval by the New York City Law Department and the Mayor’s Office of Operations. Once they are deemed lawful, the final version will be posted to this page and go into effect after 30 days.