Firms have more work and are locked in a war for talent. Not everyone’s coming in every day anymore either. What to do? 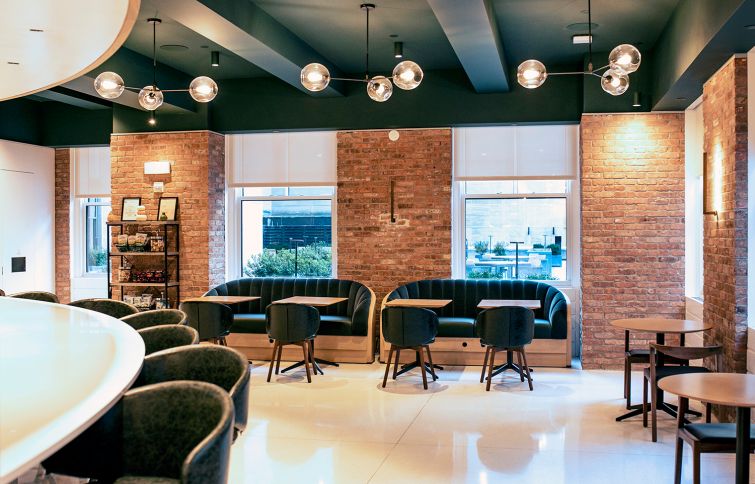 One could be forgiven for thinking the workplace of Katten Muchin Rosenman LLP was a restaurant rather than a law office.

The 140,000-square-foot space — all of the fifth, sixth, seventh, eighth and 10th floors, and about two-thirds of the ninth at 50 Rockefeller Plaza — boasts a warming kitchen, where one can get everything from a cup of coffee to a full meal, not to mention plenty of places to sit down and eat with your food, both inside and out, plus grab-and-go pantries on each practice floor  The offices, designed to serve the needs of some 160 attorneys as well as staff, represent corporate legal representation at its most up to date. The Chicago-based firm moved in April from offices on East 57th Street and Madison Avenue, where it had been for more than 50 years.

“We still don’t know — we, the industry, not just this firm — what the future of Manhattan office work is going to be,” said Chris DiAngelo, managing partner of Katten’s New York office who was instrumental in placing the firm at 50 Rockefeller.

For the legal industry, one of Manhattan’s historically largest users of office space, it’s been one thing after another, the sleepy transition from one 15- or 20-year lease to the next being anything but in the past several years. First there was the technological revolution, which made spacious law libraries a thing of the past, and then computers, including laptops, that made dragging small mountains of briefs into court obsolete. Then, as soon as the industry got used to that new normal, along came COVID-19, thus making even coming to work something that couldn’t be 100 percent assured.

Row upon row of attorney offices in the Katten space offer mute testimony to the uncertain world law offices now live in. Lawyers, unlike other professionals, demand their own offices — some things don’t change — but at 50 Rock, every office is the same size. Some are strewn with paper awaiting someone who is in every day. Others are clean and neat, assigned to an attorney who might come in once a week, if that often.

At Katten’s new offices, there’s an emphasis on conference space, where the firm can conduct panels for audiences to listen in on, and conference rooms where attorneys can gather around big tables to strategize, or to negotiate with outsiders.

The legal industry is up against some rapid wholesale changes, according to brokerage Cushman & Wakefield’s latest Bright Insight report on the industry, issued in June. One change is due to the industry’s own success. Many firms are trying to get bigger and take on even more work, even as they are trying to reduce their space per attorney and take advantage of less need for space. Every firm on American Lawyer’s annual ranking of the 100 highest-grossing firms reported increased revenue in 2021, and 14 percent reported revenue jumps of at least 31 percent.

Among firms surveyed, 37 percent said they didn’t anticipate things getting back to normal until the second half of this year, and another 26 percent said it wouldn’t happen until the first half of next year. And normalization doesn’t mean everyone returning to the office every day. It means what staffers decide to do on an individual case-by-case basis.

That level of success suggests a conundrum, though one many other industries would like to have. Law schools want to recruit more attorneys, but at the same time law schools are turning out fewer industry-ready attorneys. And, for the ones lucky enough to be seen as talented and worthwhile, there’s a bidding war. Things like an opulently stocked cafeteria just might be the thing that puts one firm over the top of another.

“The decade prior to the pandemic, we were already starting to see the industry change very quickly,” said Sherry Cushman, vice chairman of the legal services advisory group at Cushman & Wakefield. “As you probably know, it was always historically a very slow-transitioning industry. Even the big guys didn’t want to do anything drastic. Everyone wanted to see what everyone else was doing. We were trying to get to under 500, 600 square feet per attorney. A decade or more ago, it was not unusual to see 900, 1,000, 1,100 square feet per attorney.”

With Skadden Arps LLP, one of the best-known corporate law firms in the world, leading the charge over to the new towers at Hudson Yards, it was indicative of a flight to quality among law firms, she said. (Skadden actually moved to 1 Manhattan West, a Brookfield project, considered part of Hudson Yards though it doesn’t carry the neighborhood’s name.)

Though for some firms, the trick was discovering who actually liked working this new way. Cushman said “something magical” occurred around the sixth month of the pandemic shutdown.

“We hold monthly legal services advisory calls for all of our members,” she said. “And it was fascinating to see, advisers all around the world were saying, ‘You know the lawyers are getting OK with not coming into the office every single day.’ And that just continued to domino and domino.”

It got to the point where many firms considered hoteling, which means holding desks and offices that could be reserved on a daily or weekly basis rather than assigned permanently to a particular staff member. Katten was one of those firms.

“We did explore hoteling,” said Scott Vetri, the firm’s New York real estate department chairman. “And we did implement hoteling, but probably not to an extreme.” He said the firm would continue to explore hoteling “as our space needs may evolve”

Architectural firm Gensler created the Katten office’s minimalist design, which features polished wood floors and lots of glass — so there’s no hiding whether you’re in or not.

Firms are “leading with hospitality and what I call the experiential approach,’” said Timothy Bromiley, Gensler’s principal and professional services leader. “We’re creating ecosystems of spaces that create unique and fulfilling experiences that hopefully will make people want to come in. It will be a draw for people to want to come to the office.”

On the ninth floor, Katten’s space opens onto Radio Park, which is actually the rooftop of Radio City Music Hall, next door to 50 Rock. The leafy expanse, owned and built by Katten’s landlord Tishman Speyer, is used as an amenity by all of Rockefeller Center’s tenants, with a dedicated elevator which allows outside users to access the deck without tramping through Katten space. It has plenty of places to sit and enjoy the scenery, and Katten employees sometimes sit there when there’s not a formal event. Katten’s offices have two outdoor terraces dedicated to the firm.

Even with all the downsizing that’s been going on, law is going to continue to be a major user of offices, said Cushman and Rachel Casanova, senior managing director of workplace innovation at Cushman & Wakefield.

“Right now, partners pick their own furniture and they make these decisions,” Casanova said. “But they recognize that running a business is different. This is the big rub. [Even smaller firms realize that] streamlining makes for greater efficiency.”