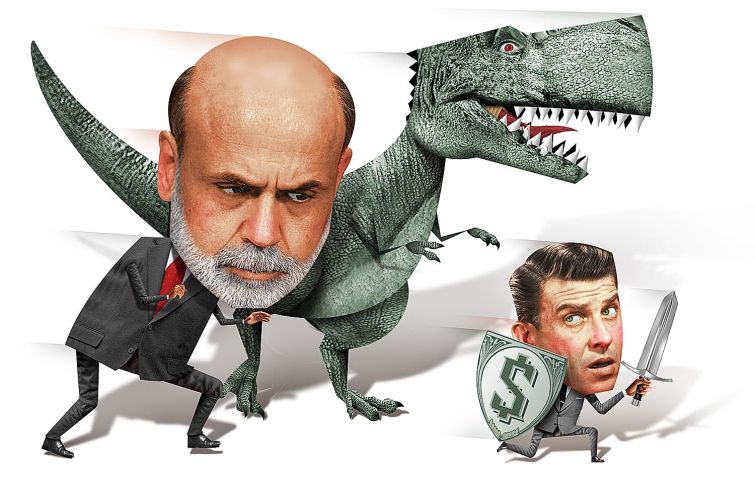 Would you Rather: Traverse Jurassic Park on foot or relive 2008? Image: John Corbitt

A plastic glass filled with water sits on a car’s dashboard on a dark and stormy night. Something large and unseen is coming closer, and the water ripples with every thump of the predator’s gigantic feet.

A T-Rex finally emerges through the trees, baring its teeth and chowing down on a goat that had been alive and well only minutes earlier, dropping its prey’s dismembered leg onto the car’s skylight for extra terrifying impact.

Sure, flesh-eating dinosaurs weren’t walking the streets of Lower Manhattan, but — lest we forget — 2008 elicited its own form of nightmare-inducing terror, with bank failures, bailouts, layoffs, stock market crashes and the propping up of Fannie Mae and Freddie Mac. When all was said and done, the U.S. had experienced the worst financial meltdown since the Great Depression.

So, as we approach a likely recession next year, we thought it was a good time to ask our lenders to reflect on the global financial crisis, and contemplate where they’d rather be today: Traversing Jurassic Park on foot 66 million years ago, or back in 2008?

Apollo’s Sang Yu is taking his chances with the dinos and confidently choosing “Jurassic Park,” while BMO’s Paul Vanderslice said that, for him, “Jurassic Park would be the less stressful alternative.” (We just hope that a velociraptor doesn’t take a slice out of, well, Slice.)

Yep, extra-low-meat after all the running and screaming, we’re sure, Perlman.

Blackstone’s Tim Johnson doesn’t fancy his chances in the Jurassic jungle. “I lived through 2008 and learned a lot. I couldn’t say the same would hold true in the other scenario.” Neither does JPMorgan’s Kurt Stuart: “I believe we are products of our past and wouldn’t change what I have lived through. I’m also not sure what my chances are against a T-Rex!” As Power Finance lenders, we think both Johnson and Stuart can take those alpha predators — or at least negotiate a fair exit for themselves.

The learning experience of 2008 had Oaktree’s Katy Mao, Madison Realty Capital’s Josh Zegen and 3650 REIT’s Justin Kennedy “raptor round” its finger, with all three opting for 2008. After all, as Kennedy pointed out, “We already know the way.” While this is true, we think that a few 15,000-pound carnivores would determine your sense of direction pretty damn quickly.

Barclays’ Larry Kravetz and Clarion Partners’ Drew Fung thought like true savvy market players in their contemplation. Kravetz was at Lehman Brothers in 2008, and feels he could survive the global financial crisis again, but asked: “Can I short the market with the knowledge that I will be reliving it?” Fung also chose 2008 because “knowing what I know now, we could earn some fabulous returns.”

We dino — er, dunno what’s truly scarier, and we never will. Lessons from both can be “scaled,” we’re sure. But one thing’s for sure:  Life (and lending) always finds a way.