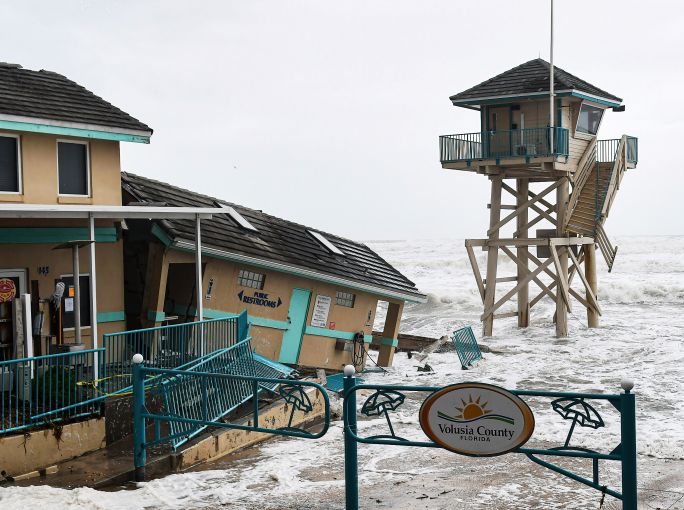 Waves crash near a damaged building and a lifeguard tower in Daytona Beach Shores in Florida. Photo: Paul Hennessy/SOPA Images/LightRocket via Getty Images

Local officials in Florida’s Volusia County, which includes Daytona Beach, have evacuated dozens of oceanfront properties for fear that they have become “structurally unsafe” due to Hurricane Nicole, though South Florida appears to have been spared.

Nicole, a Category 1 hurricane, made landfall Thursday at 3 a.m. just south of Vero Beach, which is north of Port St. Lucie, according to the National Hurricane Center.

Despite Volusia County being 130 miles north from the Vero Beach area, Volusia’s County manager George Recktenwald described the structural damage along the coastline as  “unprecedented.”

“We’ve never experienced anything like this before. … This is going to be a long road to recovery,” the official said at a press conference Thursday afternoon. About 19 hotels or condo buildings and 40 single-family homes have been compromised, according to preliminary reports. As inspections continue, Recktenwald expects the figure to grow.

Even before the storm hit on Wednesday, there were “dozens upon dozens” of buildings that were declared structurally unsafe, said Volusia County Sheriff Mike Chitwood, whose staff went door to door to evacuate residents living in those condominiums.

Powerful storm surges threatened the foundations of many oceanfront properties, destroying sea walls in some cases. The buildings most affected appear to be along the barrier island in Daytona Beach Shores, a town lined with condominiums and resorts, and just south of it in Wilbur-By-The-Sea, which is mostly single-family homes.

Other structures had barely recovered from Ian, a powerful Category 4 hurricane that made landfall along Florida’s western coast in late September, killing at least 101 people and costing an estimated $67 billion in insured losses — potentially making it Florida’s most expensive storm.

The Hawaiian Inn Beach Resort, an oceanfront motel in Daytona Beach Shores, has been shut for safety issues since Hurricane Ian hit, according to WESH 2 reporter Claire Metz. Now Hurricane Nicole has eroded much of its foundation, pictures show.

It’s unclear when residents living by Volusia County’s coast will be able to return home. Officials, who urged people to stay clear of the beach, declined to provide a timeline for when residents could come back.

Despite some flooding and damage, including to Lauderdale-By-The-Sea’s pier, hurricane Nicole appears to have spared South Florida the worst. Surprisingly, the storm caused no significant damage in Vero Beach, apart from damaging a boardwalk, local officials said. Public schools in Miami-Dade County, which shut on Wednesday, reopened Thursday.

Nicole has already been downgraded to a tropical storm, bringing heavy winds and storm surges to the Tampa area and panhandle. It’s expected to run through Georgia on Friday and the Carolinas over the weekend.