How Billionaires’ Bunker Is Preparing for Higher Sea Levels

The island enclave is building a seawall using basalt, a corrosion-proof steel alternative 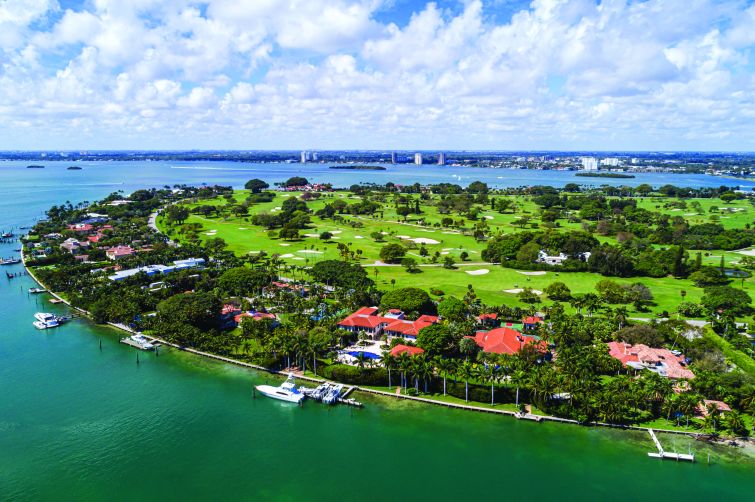 Yachts encircle the palm-lined isle of Indian Creek, shielding the gilded estates behind them. The only bridge into the Florida town is blocked by a red-tiled hut; security guards inside ensure that only those authorized to enter are allowed through.

Like all coastal and island areas, the Village of Indian Creek is surrounded by a seawall to protect its half-mile of land from the waters of Biscayne Bay.

Wealth alone won’t protect the inhabitants of the human-made island from the ravages of rising seawater, hurricane winds and raging storm surges, which is part and parcel of life along the South Florida coast. But it certainly helps.

And Indian Creek has hit on a novel way to weather the storms.

Following the deadly collapse in June 2021 of the Champlain Towers South condominium building a few miles away in Surfside, the Village of Indian Creek reviewed its existing infrastructure plan, looking for new ways to combat corrosion — a fatal factor that contributed to the Surfside tragedy.

With its resources, the town pursued an innovative solution based on basalt rock for the sea wall surrounding the island. While not a new discovery, basalt represents a fledgling solution to an age-old problem intensified by rising sea levels: How to prevent corrosion in sea walls and their support structures. Unlike steel, basalt does not rust. The question is whether less wealthy municipalities will follow suit.

Most properties along the bay or the ocean in Florida have sea walls to prevent buildings from flooding and to protect the land from erosion. Sea walls are commonly made of concrete, which is reinforced with steel rebar. But a major drawback of steel is corrosion. Whenever steel comes into contact with air and saltwater, it rusts, expanding in size and fracturing the concrete — making it unstable and unsafe. Remedies against rust, such as zinc coating, haven’t eliminated oxidation.

Basalt, however, is a “game changer,” said Christopher Ferraro, a professor at the University of Florida who specializes in the development of sustainable, high-
performance, cement-based materials. About “95 percent of all concrete repairs are due to corroded steel. So, if I can prevent corrosion, I’m saving myself a lot of headaches.”

The collapse of the Champlain building, which killed 98 last year, further heightened fears of corrosion among Florida homeowners, property managers and elected officials.

A 2018 report warned Champlain residents about “major errors’’ in the building’s bones. Insufficient waterproofing in the pool deck area was damaging the reinforced concrete structure below it. Failure to remove and replace the reinforcement made with steel rebar would cause “the concrete deterioration to expand exponentially” — in other words, to corrode. Pictures showed “crackling and spalling,” most likely caused by corrosion, in the columns and on the underside floor slab of the parking garage. The Champlain’s condo association had delayed carrying out the major repairs for about three years, to just a few months before tragedy struck.

Enter basalt. It’s a type of volcanic rock, which forms when magma is exposed to the Earth’s surface and the lava cools quickly. Unlike steel, it’s impervious to saltwater corrosion since it’s a mineral, not a metal.

When the Champlain condo crumbled, the Village of Indian Creek had just begun upgrading its infrastructure. The project included improvements to the town’s roads, drainage system, storm structures and sea wall. After seeing the images of spalling inside the ill-fated condo building, Indian Creek’s manager was determined to remove “corrosion from the equation,” said Fred Tingberg Jr., COO of Basanite. The company, based in Pompano Beach, sourced basalt-based rebar rods for the concrete sea walls, which surround the island, and other stormwater structures. (Representatives for the Village of Indian Creek did not respond to requests for comment.)

Basalt-based reinforcement does have some drawbacks. It’s far less flexible than steel and will have a higher tendency to snap. However, basalt lasts longer than steel, which typically will need to be replaced after 20 years.

Basalt fiber has competitors — it isn’t the only alternative to steel bars on the market. Reinforced fibers can also be made from glass and carbon. But glass fibers require more energy to produce, making volcano-harvested basalt a more environmentally friendly material, its proponents say. The other alternative, carbon, tends to be far more expensive than both glass and basalt fibers.

The exact cost of basalt is somewhat unclear. Basalt-based rebar rods are more expensive than ones made with steel. But Basanite’s Tingberg insists that since basalt rods are lighter than steel, the total price of basalt-based rods — with transportation and installation costs included — comes to about the same as steel.

Despite the significant advantages that basalt offers in fighting corrosion, Indian Creek’s move remains rare. “Reinforced concrete is made with steel today, I would say, 99.999 percent of the time,” said University of Miami professor Antonio Nanni, whose research focuses on construction materials and their structural performance. Steel rebar is readily available at many home improvement stores, whereas basalt remains harder to find.

While basalt in its purest form as solidified volcanic rock has been around for centuries, using it in reinforced concrete is new. For Indian Creek, Basanite supplied rods known as Basalt Fiber Reinforced Polymer (BFRP), in which basalt is just one component. The ability to mix two or more constituent materials and create a usable material is an innovation that dates back to World War II.

But it’s only in recent years that basalt-based polymers have made inroads in the construction industry, in part because of its high barriers to entry. “Ultimately, the safety of the public is at stake. It’s one thing to do a fishing rod. If it breaks, you’ve lost the fish. But if the reinforced concrete breaks, you kill people,” Nanni said.

In August, ASTM International, considered the global leader in setting technical standards for a wide range of materials and products, issued a material specification for basalt fibers. The specification defines the properties expected from the fiber to be of an appropriate performance, potentially setting the stage for wider use of basalt fibers.

Early customers of emerging technologies are often the wealthy, who have resources and a high tolerance for risk, including of the financial sort — such as the residents of Indian Creek.

“When it comes to technology adoption, you have to conquer those headwinds,” said University of Florida’s Ferraro. “Usually it’s going to be the people that are a little bit more educated, usually wealthier, who are going to adopt new technology.”

Ferraro likened Indian Creek’s use of basalt to Tesla’s early days. About a decade ago, as the electric car first came onto the market and the industry criticized the vehicle for its high price and impracticality, celebrities such as Oprah Winfrey and George Clooney were some of Tesla’s early buyers. Now, the company is a market leader, and the rest of the automobile industry is playing catch-up.

While Basanite has supplied basalt-based rods to Miami Beach and Pompano Beach for a sea wall and a wastewater project, to Tingberg there’s probably no better brand ambassador than Indian Creek. He considers the uber-wealthy town’s use of basalt a vote of confidence for the material.

With the resources available to Indian Creek, the wealthy island-town proactively sought alternatives to steel. After the collapse of the Champlain building, Jennifer Medina, then Indian Creek’s town manager, began doing research and found basalt. She then instructed her contractors to study whether it was feasible to use basalt reinforcement, Tingberg said. Together, they issued a request for proposal, which Basanite ultimately won.

Since storm-surge structures, such as sea walls, are largely left to municipalities to tackle in Florida, Indian Creek seems to have done the work without outside help. James Murley, Miami-Dade County’s resilience officer, was unaware of Indian Creek’s use of the basalt-based rods. “Certain areas have all the resources they need to go ahead,” Murley said. They’ll “probably give a document back to the state [government], but they’re not going to stand in line waiting for the state.”

But many poorer municipalities must, making the process of preparing for storm surges more complicated and slow. In 2020, Florida’s government launched a statewide sea-level and flooding vulnerability assessment study, for which it’s offering grants for municipalities to do assessments and ultimately fund at least part of the construction. A chunk of Murley’s work is spent aiding the unincorporated and poorer section of the county to apply for the grant.

“The mainland is where we’re spending most of our time,” Murley said, “not to the exclusion of any of our island communities, but just the fact that they typically have resources — they have CEOs of companies.”