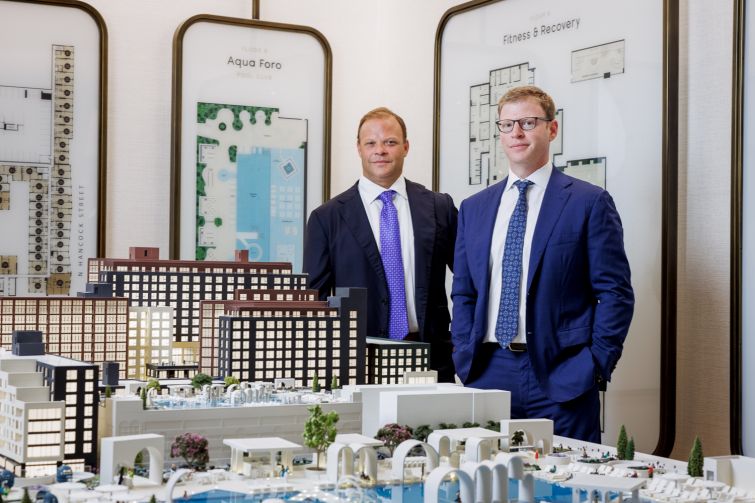 America’s founding fathers looked to Philadelphia as an early capital before heading south to Washington, D.C., and Post Brothers is trodding a similar path.

Since the firm’s founding in 2006, the developer has been focused exclusively on its hometown of Philadelphia — until now, that is. During a time when many companies are trying to simply stay afloat, the firm has added to its portfolio and expanded its geographic footprint to include Washington.

And, its ambitions for the nation’s capital are as high as the Washington Monument.

“We want to become the dominant residential developer in D.C., period,” said Matthew (Matt) Pestronk, president and co-founder of Post Brothers with his brother Michael (Mike). (The company’s name comes from a sporting goods and military surplus business, Post, that had been in the brothers’ family.)

Despite the firm’s deep Philly roots, the D.C. market has been on Post Brothers’ radar for quite a while.

“At various times in the past 20 years, D.C has been rated as the No. 1 most desirable, institutional market for investment — globally,” Matt Pestronk said. But that meant it was priced like Manhattan. It’s not right now.”

Much of the change in sentiment today is driven by the city’s glut of aging office stock, which is now nearing the end of its useful life and simultaneously opening an avenue of opportunity for different, more critical uses — and new blood on the development side.

Post Brothers made its D.C. debut in May with the $228 million acquisition of a two-building, Class B office complex, Universal North and Universal South, with plans to convert the formerly JBG Smith-owned buildings to multifamily units.

The approach isn’t new for Post Brothers, which made its name converting office properties to residential buildings and, as a result, was able to hit the ground running when the Universal opportunity arose. The sale was originally marketed as an office lease-up play, with Universal North only 40 percent leased at the time of acquisition.

“What we’ve done historically is now in demand again as a useful skill set, which is buying buildings opportunistically that have depressed cash flow, or no cash flow, and converting them,” Mike Pestronk said. “We’re looking for the very best adaptive reuse conversion opportunities, and there seem to be more and more office buildings like those we bought in D.C.”

Office-to-resi conversions in D.C. haven’t been overly prevalent thus far, Matt Pestronk said, as many of the largest office owners are still focused on protecting the value of their office assets as-is, even if they’re having leasing trouble in the new flight-to-quality environment.

There seems to be momentum building, though, as the market choppiness intensifies. After all, D.C. office vacancy hit a record 19.9 percent in the second quarter of this year, according to Bisnow.

According to GlobeSt, the $155 million commercial mortgage-backed securities loan on 450 Fifth Street NW is currently being marketed as a multifamily conversion opportunity by Newmark — and expected to trade at a discount — while Eastdil Secured, on behalf of lender Allianz Real Estate, is likewise marketing the 320,000-square-foot vacant office building at 700 11th Street NW as a conversion play.

The city appears to have the converters’ backs. Washington Mayor Muriel Bowser is a big proponent of office-to-resi conversions, unveiling plans to incentivize such conversions in December 2021 and pushing to rezone office-only districts.

“Good conversion opportunities are something we really haven’t seen for a decade,” Mike Pestronk said, noting that two cycles ago, it was the 1930s-era buildings that were deemed fully obsolete as offices by 2000.

“I think we’re seeing the same thing again, but with the next generation of office buildings from the ’70s and ’80s,” he said. Still, conversions aren’t cheap, so “we need to be buying them at a pretty big discount to what that building was last valued at as an office.”

Commodity office buildings have “traded and traded and traded,” Matt Pestronk said. “The last person to buy one of those buildings as a lease-up play was hit by COVID, and couldn’t lease the building. So that buyer has been carrying this vacancy with financing on the buildings and has now just thrown in the towel. There’s a vicious cycle of needing to put more money in that they don’t have, and, even if they did, they still wouldn’t have a fully leased building. We’re watching this play out on dozens of properties.”

But whereas Washington office values have dropped demonstrably, “I’m 100 percent sure the fundamentals for the Class A residential market are extremely solid. So we’re looking at something where other people don’t necessarily see the use that we see.”

Also, “the financing markets have been really volatile, and we’re seeing a huge opportunity to buy things where people are scared,” Mike Pestronk said.

Market volatility has been building since the first quarter of 2022, resulting in a starkly different year from the transactional heyday of 2021. Volatility is frequently a catalyst for both distress and opportunity, however.

“Half the opportunities we see today are coming through lenders who are concerned that they might have to take a property back — or they have already taken a property back —or people who own the properties themselves, who don’t want to take the expense to reposition it to meet today’s market,” Matt Pestronk said. “This could be a hotel or an office building, but the opportunities just keep coming.”

The balance sheet side of the debt world has fed much of that machine this year.

“It takes a long time to resolve a CMBS loan, especially if it’s going to result in an impairment for the [CMBS] trust, so those opportunities are not coming quite so quickly,” Matt Pestronk said.

As a borrower of both balance sheet and CMBS debt, he hasn’t struggled with the servicing process with the latter financing source, but “I imagine that it’s torturous to try and modify CMBS loans,” Matt Pestronk said. “You look at some of these office situations and you hear anecdotally that a servicer wouldn’t approve a lease that was below the underwriting [requirements], and so the CMBS servicing process itself can be a hindrance to the value of the asset because you can’t get a lease approved. A balance sheet lender might just be like, ‘Well, we thought we were gonna get 60 bucks a foot, but 45 is better than zero, so great. Do it.’ But, you can’t do that with a CMBS loan.

The Pestronk brothers learned how to navigate choppy financial markets during the global financial crisis. It was a time when they were still cutting their teeth. The firm started in 2006 buying 10-, 50- and 80-unit multifamily buildings and was in the market for financing for a much bigger project just before the market tanked in 2008. (Post Brothers has since developed more than 30 properties, 8,000 apartments, and 700,000 square feet of office and retail space.)

“We had three term sheets signed with Wachovia, Bear Stearns and G-MAC, and the lenders didn’t walk away from the term sheets, they went out of business,” Matt Pestronk said. “I don’t think that’s what’s going on now by any means, but what I took away from that time is, you don’t want heavy capital markets-driven exposure for your business. Also, owning apartments is a good way to hedge that.”

Still, “choosing to do a refi now is just choosing to be tortured, same with acquisition financing,” Mike Pestronk said. “There are almost zero loans by capital markets lenders. There are definitely banks out there lending but it’s all relationship lending where you’ll hear, ‘I’ll do this deal for you, but we’re lowering the leverage.’ ”

As a result, many borrowers are choosing to do all-cash deals to avoid the debt market pain. “In my opinion, not a lot of people can do it,” Matt Pestronk said. “We have our own capital, and we have investors that are not institutions. We didn’t buy Universal all-cash, but if we were buying something like that today, we’d have the expectation that whatever financing we got, if any, was not going to wind up the same [amount and terms] when it closed.”

While office market distress is providing some key opportunities for Post Brothers, its founders put much of the firm’s success down to a simple truth.

One of the big reasons behind the lack of supply is the cost of new construction, he said.

As such, Post Brothers is focused on innovation around bringing down construction costs, including with its Broad and Washington development in Philadelphia — the largest multifamily development by unit size in the country. “We’re able to do that not because Philadelphia is such an incredibly strong market — it’s a decent market — but because of the innovation in construction technology.”

The project is the biggest one in the country to use prefabricated load-bearing walls, allowing Post Brothers and partner Tower Investments to develop lower-cost, Class A housing while not compromising the product in a way that fully modular construction might.

“Nobody wants to live in a vertically stacked shell, and no 30-year-old with disposable income wants to live in a place with narrow rooms and low ceilings, and all the crappiness that tends to come with modular construction,” Mike Pestronk said. “We need to figure out how to innovate to continue to beat the market in terms of costs and product desirability.”

Sustainability is at the firm’s core. It’s currently leading the way in its hometown as the largest private buyer of wind energy in the Philadelphia region. Further, the firm says all of its buildings are essentially carbon-free.

In terms of which market is next for Post Brothers, the firm is looking to buy in “established, mature locations where there’s an opportunity to get a major piece of real estate that’s unencumbered. The pattern of what’s going on in the market leading to the opportunities that we describe in Washington exists in other cities, too, and it’s probably going to continue to exist,” Matt Pestronk said. “It has to be a globally liquid market and a big market. Boston is globally liquid, but it’s a small place. So, it could be Houston, or maybe Florida.”

The firm isn’t looking to expand fast, though.

“For the last eight years, we’ve been really focused on new construction, because there haven’t been conversion opportunities, and new construction is the way to control our destiny. But we’re seeing that change. We’re already a dominant presence in Philadelphia, we really want to really be a dominant presence in Washington, D.C., and we would like to really be in one more market in a major way,” Mike Pestronk said. “When we’re in a market, we want to be a critical mass; we’re not going to have one project in 10 different cities. We’re very hands-on and we’re very product-focused, so we need a critical mass wherever we’re going.”