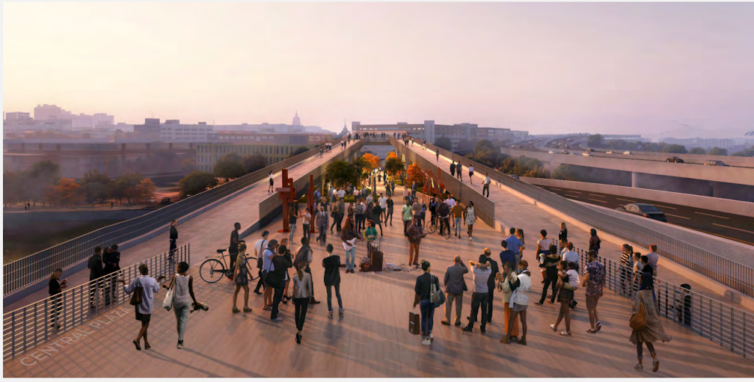 The National Capital Planning Commission (NCPC) has approved final designs for the 11th Street Park Bridge, a $92 million project that will connect Anacostia to the Navy Yard in Southeast Washington, D.C.

The bridge will double as an elevated public park, with green spaces, trails, landscaped flora, and a variety of activities and facilities.

A national competition, led by Building Bridges Across the River and the District Office of Planning, in coordination with the District Department of Transportation (DDOT), selected a conceptual design for the bridge park from the winning architecture team of OMA + OLIN in 2014.

The NCPC reviewed the concept plan in 2017 and the preliminary design in 2020, and the design team has continued to retool the plan up until final approval at the commission’s meeting on Friday.

“This is such an exciting project for the District,” Beth White, NCPC’s chair, said in a prepared statement. “The park design is very innovative, and it is a public space that will better connect the communities on both sides of the Anacostia River. I am certain that this will be a space for everyone to enjoy and come together.”

When complete, the park will sit atop leftover pilings and piers from its namesake bridge and include an 11,000-square-foot play area, a café, a garden with hammocks, and an environmental education center. Additionally, an amphitheater and kayak and canoe launch is planned next to the existing Anacostia Riverwalk Trail, and there will be two scenic overlooks: Capitol Overlook on the north end and Anacostia Overlook on the south end.

The 1.2 acres that comprise the Navy Yard side of the park will feature trails and landscaped green space, while the Anacostia side will house an urban agriculture garden, according to the DDOT.

The original plans for the park date back to 2014, and it’s been going through a long process that has seen the budget more than double from the original estimate of $42 million.

At the meeting Friday, the NCPC called the final design “a tremendous asset to the community and a new destination in the city.”

Among the positives of the final plan that the commission pointed out were improvements to proposed access and signage, as well as updates to the plant palette to include more native varieties and milkweed for monarch butterflies.

The development team must now choose a general contractor. Construction on the park is slated to begin next year, with an anticipated opening of the first half of 2025.