'There’s yet to be a silver bullet solution that helps all apartment owners in all circumstances.' 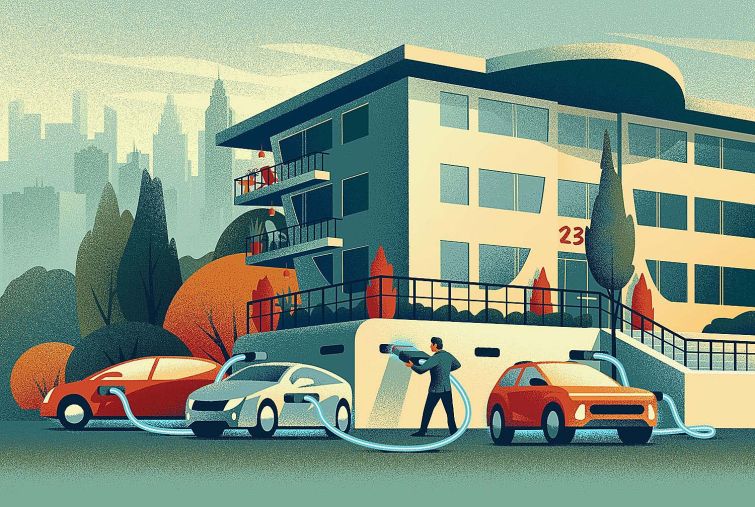 Electric vehicles have traditionally been defined by range anxiety: the fear of running out of power midway through a trip. But the real challenge for increased EV adoption, according to Zach Jennings, the CEO of apartment-focused charging startup Chargie, is charging anxiety. Drivers simply want to know there’s a reliable place to plug in when they need it.

Providing that reliability is going to be a central infrastructure challenge for California, which supercharged its own EV ambitions with an announced ban on the sale of new gas-powered vehicles starting in 2035. Last week, New York announced it would do the same by 2035 and other states are expected to follow.

Supported by a web of renewable energy targets and regulations around electric trucks, the Golden State’s electrification target has created an all-hands-on-deck feeling, as EV charging firms look to aggressively expand.

But to meet the goal of electrifying the transportation sector, the state will need to look beyond high-end EV owners with their own charging arrangements at home and provide infrastructure for renters, especially in lower-income neighborhoods. And apartment owners will face the dilemma of how and when to install chargers on their properties.

More than half of California’s residents rent, and therefore lack easy access to at-home chargers or Tesla’s Supercharger network. Historically, the focus on expanding the charging network has been on houses — 85 percent of EV owners live in single-family homes — as well as commercial corridors and office parking lots. Apartments represent a tricky, but necessary, part of the charging network, especially in Los Angeles, which set a goal of 80 percent of new vehicle sales being electric by 2028.

“EV owners and purchasers of the past decade have tended to be white, high-income males who have access to home charging,” said Garrett Fitzgerald, senior director of electrification for the Smart Electric Power Alliance, a nonprofit that helps utilities deploy clean energy. “Charging infrastructure is primarily in areas where that demographic lives and primarily not where other demographics live.”

This massive infrastructure investment will be a significant challenge for apartment owners and landlords, who will need to balance installation costs for chargers and the potential need for new electrical capacity (which can run up to six figures per apartment building to install), as well as a myriad business models and potential partners offering webs of incentives.

The apartment industry wants to embrace electrification and electric vehicles, Karen Hollinger, senior vice president of strategy for multifamily giant AvalonBay, said in a webinar last summer. But it’s tough when buildings have already been built, and owners and operators need guidance from experts to navigate this shift. Building owners and operators aren’t up to date on new incentives and technology in the fast-moving, evolving sector.

“We are going to spend billions of dollars nationally on charging infrastructure in the next five years,” said Fitzgerald. “And, if we’re not intentional about it, we will make those charging deserts worse, and we will unlikely address issues.”

There’s an industry perspective that EV owners tend to be wealthier and more desirable tenants, and that adding chargers increases the value of the apartment asset. Yet, it can still be hard to make the upfront investment, especially years before it may be viewed as a necessary amenity for tenants. Multifamily EV charging is also a tougher sell to third-party vendors and operators because of a lack of a critical mass of users.

“For multifamily dwellings, we’re kind of in a nascent stage of starting to set up charging facilities in these buildings,” said F. Noel Ferry, founder of Next 10, a California-based think tank.

Overall, apartment owners will need to wade through these questions, as well as the installation, software, and hardware options, to find what works.

There’s yet to be a silver bullet solution that helps all apartment owners in all circumstances. Free charging, said Jennings, has already become less popular, as early experiments cost landlords thousands of dollars per station. Heather Hochrein, CEO and founder of EVMatch, which operates a network of private charging stations, says that the markets for software and hardware for EV charging are still “the Wild West.”

“It just gets complicated,” Fitzgerald says. “Landlords don’t want to be in the business of selling EV charging; they don’t want to own an expensive charger and sell power to drivers. It’s just one more thing outside of their core business.”

The demand from renters is predicted to grow significantly in coming years. The growing number of electric vehicle models on the market, and the slowly shrinking price of a new EV, is starting to provide more moderately priced options within reach of more rental households. And new funding from the Inflation Reduction Act and other laws, as well as the recently passed California budget and support from the California Energy Commission can help. Jennings and others argue that now is the time to seize the moment before the market matures and incentives are phased out.

For instance, Southern California Edison, which serves roughly 15 million people, set aside $436 million for a program to install 35,000 charge ports, focused on disadvantaged communities, with 30 percent of that earmarked for multifamily homes. Available advisory services also help owners navigate the different products and building policies around charging. Even with the incentive — $3,500 per port at a new building and $1,450 for a renovation — and help covering any related infrastructure upgrades, owners may need to put in more funding to bring their electrical systems up to par.

Southern California Edison expects to run out of these funds by the end of the year; it has twice as many applicants as it can serve. Apartment owners still need more clarity about long-range incentives and how they work, Hollinger said, so they can plan further ahead to make large investments in capital expenditures.

There’s plenty of room for progress. A 2021 study by the California Energy Commission found the state would need 1.2 million public chargers by 2030 to meet the fueling demands of 7.5 million plug-in electric vehicles. Another state estimate suggested multifamily chargers will need to account for roughly 10 percent of the total. Current progress pins the total number of chargers in the state at just shy of 80,000 as of early this summer, far from sufficient.

“A lot of the costs of these projects are labor costs, ripping up parking lots and laying conduit,” said EVMatch’s Hochrein. “I don’t think these installations are going to get cheaper as time goes on.”

Older apartments — including Los Angeles’ famous dingbat buildings of the postwar period, a style found in other Sun Belt areas — often lack the electrical infrastructure to install chargers. Newer buildings are covered by state building code requirements to pre-wire 10 percent of parking spots so it will later be easier to install chargers. Retrofitting surface or garage parking can range from $2,000 to $10,000 per spot, and multifamily dwellings, especially small ones, don’t have a lot of parking to begin with, so EV-only spaces further crowd small lots or garages.

Some advocate for more software and tech solutions to serve as a bridge and expand the charging potential of a limited number of plugs. Especially as EVs take off in Southern California, the increasing need for multiple chargers at every site will require tech to manage the energy load. Firms like EVMatch offer subscriptions services, so property owners can help more drivers utilize limited charging infrastructure. Chargie, which has installed chargers at hundreds of apartment buildings, offers load-management software to distribute and load-manage limited power bandwidth to multiple vehicles. Four chargers become 16, for instance, with vehicles slowly powering up overnight.

Others are testing additional technology solutions, including installing batteries and solar panels so building owners could theoretically offer charging without incurring steeper electricity costs. Chargie is testing this option in Los Angeles, one more potential innovation for a market that’s still in flux and running out of time.

“We used to have some time to figure it out,” said Fitzgerald. “But, now, the market is moving so quickly that we don’t have any time left to figure it out. And we need to figure that out now.”