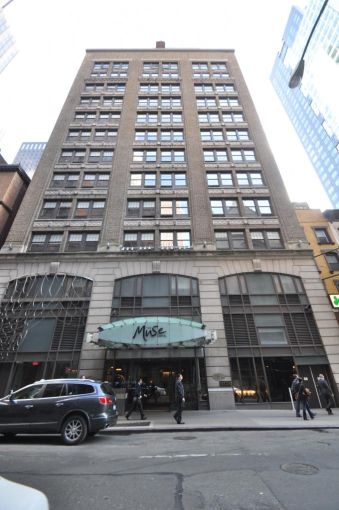 Chartres Lodging Group is no longer musing over its next hotel purchase.

A firm tied to the San Francisco-based hospitality company nabbed The Muse hotel at 130 West 46th Street for $49.5 million from asset manager Barings, according to property records made public Wednesday.

Kimpton Hotels & Restaurants Group, part of the InterContinental Hotels & Resorts (IHG) brand, has managed the posh Theater District property between Avenue of the Americas and Seventh Avenue since Barings snatched it up in 2006 for $30.8 million, according to Hotel Executive. Chartres’ deal to purchase the 200-room building closed the same day The Muse abruptly announced it would leave the IHG brand in a September email to members, according to public records and LoyaltyLobby.

It’s unclear what Chartres has in store for The Muse, which wrapped up a redesign of its lobby, fitness center and upscale eat-and-drinkery Muse Bar with Kraig Kalashian Architecture & Design in January 2020, according to Hospitality Net. Chartres had not filed any permits to modify the 17-story property with the New York City Department of Buildings as of Wednesday, and Chartres, Barings and IHG did not immediately respond to requests for comment.

The deal comes just days after Barings, a subsidiary of the Massachusetts Mutual Life Insurance Company, purchased Watermark Capital’s leasehold interest in the Midtown Marriott hotel at 307 West 37th Street for $73.7 million  — quite a discount compared to the $95 million Chicago-based Watermark paid for the stake in 2014, The Real Deal reported.