The project was paused for two years, but is now back on track 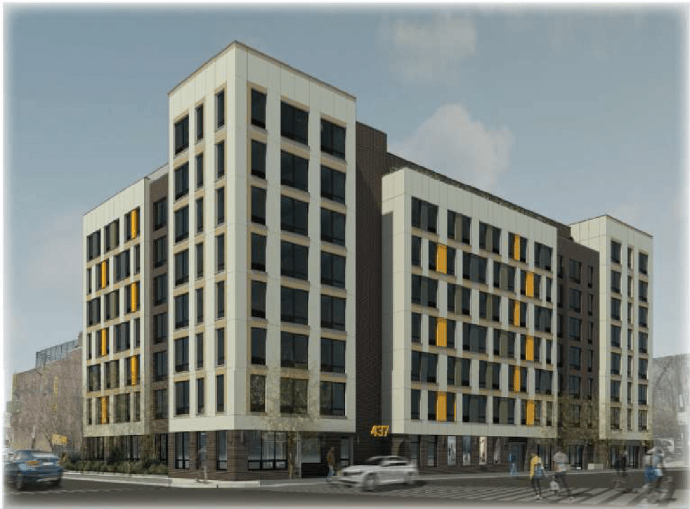 Barings provided the $11.5 million, 30-year loan for Euclid Glenmore Apartments, an eight-story building at 437 Euclid Avenue that when completed will provide 135 affordable housing units to tenants at or below 60 percent average median income.

Eighty-one of Euclid Glenmore’s units will be set aside for formerly homeless families or individuals. The property will also feature a dedicated supportive services office on the premises, and a community center that will provide child care and medical services to residents.

“We’re excited to see this housing project begin construction. As market dynamics for affordable housing developers are currently very challenging, structuring these transactions requires creativity and patience,” Daron Tubian, national head of affordable housing investments at Barings, said. “Barings’ long-lasting commitment to work with Lantern and Mega on this development is a key element of how we manage our relationships with partners dedicated to helping communities in New York City and across the country.”

Lantern and Mega have teamed up in the past, although with Mega in the contractor role previously. “Our firm does both construction and development,” Emanuel Kokinakis, development manager at Mega, told Commercial Observer.  “We’ve built for Lantern in the past, and thought the partnership would be a good fit for the community here — given the supportive housing program services Lantern provides and populations that they serve.”

Prior to joining Barings in 2018, Tubian spent almost 14 years at Bank of America, where he and Kokinakis first crossed paths. Fast-forward to today, and both lenders are in the deal, with Bank of America providing the project’s $52.7 million construction loan, and Barings in the perm loan spot.

Describing Barings’ attraction to the deal, Tubian likened the Lantern and Mega development team to “a great marriage with a project we were fully committed to.”

So much so that Barings first signed a term sheet back in June 2020 and stayed firm on its deal terms for more than two years while COVID-aggravated project delays caused havoc — despite a skyrocketing interest rate environment when the transaction finally closed.

“We kept our commitment and honored the term sheet that we had issued,” Tubian said.

“We’ve been shovel-ready on this project for close to two years,” Kokinakis said. “So it took literally two years from that point to get to a closing table. We had to manage the acquisition process with the seller, extend contracts, find alternate acquisition sources to not lose the site until we were ready, because agencies were dealing with COVID as well.”

The sponsors locked in a tax credit for the project but found themselves at the closing time with plenty of choppiness in the debt markets to deal with as one final challenge. “Going in, we thought we had plenty of cushion, plenty of room in our interest rate assumptions,” Kokinakis said. “It quickly evaporated — but we worked with Barings to rate-lock early on, so we were able to fix our rate there.”

With the delays behind them, the project is now off to the races, and at a time where affordable housing is more critical than ever in New York City.

“We’re turning a vacant lot into a brand-new building,” Kokinakis said. “It’s 135 units for both formerly homeless individuals, and family units — a model that has worked successfully to integrate folks with supportive housing needs with families within the community at low-income, affordable housing levels. This is stable housing where there’s no fear of rent escalations. So, families will have a roof over their head and beautiful homes and be able to focus on developing their careers, developing their families and improving their income status, while not having to worry about secure housing.”

Others involved in the project issued statements about Euclid Glenmore advancing.

“New York City urgently needs to increase production of housing for all, especially affordable and permanent supportive housing,” Dan Kent, president and CEO of Lantern Organization, said in a statement. “Euclid Glenmore combines low-income, senior and supportive housing, to respond to the diverse housing needs of New York communities. We are thrilled to have started construction on this project, which is made possible by our partners Mega Development, Barings, Richman Group and the New York City Department of Housing Preservation and Development.“

“We are thrilled to be celebrating this milestone alongside Lantern Community Services, Barings, Richman Group and the New York City Department of Housing Preservation and Development as we move one step closer to delivering Euclid Glenmore Apartments to the East New York community,” said Hercules Argyriou of Mega Contracting Group.

“Richman Housing Resources is proud to have partnered with Lantern Organization Inc. and Mega Group Development LLC, as well as our financing partners at HPD, Bank of America and Barings to create 135 low-income housing units” said Kevin Hoffman, president of Richman Housing Resources. “The 437 Euclid Avenue development showcases positive community impact forged by public-private partnerships and will serve as a foundation for an at-risk population by providing permanent housing, beautiful amenities, and on-site social services for its tenants.”