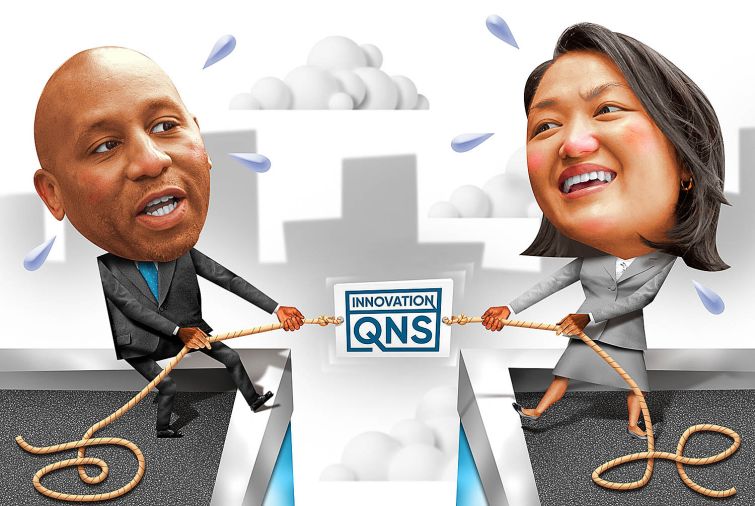 Now, a year after two real estate investment firms, Hackman Capital and Square Mile Capital, took over Kaufman Astoria, the ownership group faces a bruising rezoning fight over five industrial blocks along 35th Avenue near Sunnyside Yards. The new owners of Kaufman Astoria and their partners hope to redevelop most of the land into 2,800 apartments, 540,000 square feet of office and retail, and 107,000 square feet of community facilities. The developers have also promised to build eight public open spaces, a movie theater, a supermarket and a gallery for the Museum of the Moving Image, which is located across 35th Avenue.

The development team behind the 2.7 million-square-foot, $2 billion project — dubbed Innovation QNS — argues that the five blocks mostly include parking lots and big-box retail. The reality, of course, is more complicated.

The westernmost parcel, between 37th and 38th streets, is home to a 14-screen Regal movie theater, along with a few small houses and a pair of single-story commercial buildings. The developers have offered to relocate the homeowners and tenants, either to the new development or another home. Moving east, there’s a P.C. Richard appliance store and its large parking lot, a few small apartment buildings, a row of brick townhouses, and a halal deli. The businesses on the remaining three blocks near Sunnyside Yards are more typical industrial businesses in New York City: used car dealerships, auto body shops, tile stores, a pool hall and a Harley-Davidson motorcycle shop. The apartment buildings and the deli will remain, along with a handful of other retailers.

If the City Council signs off on the rezoning — which is nearing the end of the nine-month public review process — 11 mixed-use towers may sprout on the five-block stretch of western Queens. The tallest of the potential buildings would reach 27 stories, while the shortest would be about four stories.

Whether the Council approves the project hinges on the support of Councilmember Julie Won, who represents the southern edge of Astoria, Long Island City, Woodside and Sunnyside. The developers are promising a slew of community benefits, about which the project’s opponents — including Won — remain skeptical. Before a Council hearing last week on the development, Won said she couldn’t support it unless Kaufman and its partners agreed to make 55 percent of their rental units affordable.

“Our community deserves better, and the only way for us to fight back on the housing crisis is to build more affordable housing,” she said during a rally on the City Hall steps. “We need to build affordable housing that is affordable for all of us. That means that Innovation QNS must be majority affordable.”

“I am not against development, but pro- sound, balanced and fair community development,” Velázquez said in a statement. “What assurances do we have that this project would not further drive up rents and ultimately displace longtime community members, in favor of accelerating gentrification? None.”

The developers committed to the 40 percent affordable housing set-aside and several other community benefits in detailed letters sent to Richards and Won in August and obtained by Commercial Observer. In the letters, they also pledged to invest in a community fund to support local nonprofits and the New York City Housing Authority, to hire 30 percent of their workers from the neighborhood, to provide discounted rents to local businesses and nonprofits, and to form a community advisory board that will ensure the developers keep their promises.

During last week’s City Council hearing, the developers said they were in active discussions with HPD about securing the subsidy for the low-income units, but had not received a firm commitment from the agency yet. If the agency could not provide the funding in the near term, Jay Martin of Bedrock said the developers would wait to secure the financing rather than build and rent the units at market-rate rents. HPD, for its part, said that it was negotiating with the developers on subsidies and did plan to fund the low-income apartments.

“Our mission is to bring the most affordable housing possible to every community and we have a proven track record of working with communities and local partners toward that goal,” an HPD spokesman said in a statement. “Innovation Queens is a rare opportunity to deliver 40% affordable housing, including 15% financed by HPD. That would be an enormous achievement going far beyond what is typical for private development projects, while still enabling the city to spread its affordable housing budget across all five boroughs. Altogether with the city’s investment, the project will deliver a tremendous number of deeply affordable homes to the city’s affordable housing stock.”

Richards, who represented southeast Queens on the City Council for seven years before being elected borough president in 2020, initially opposed the Astoria megaproject. In August, he issued a formal recommendation, writing that he could not support the project unless the developers added more affordable units, including low-income ones. He also argued that the City Council and the Department of City Planning should push for the developer to make 50 percent of the housing affordable. But once the developers agreed to set aside 40 percent of the project’s units as income-restricted — with 500 apartments going to low-income New Yorkers — Richards changed his mind.

“We are in a state of emergency,” he said. “As someone who’s done this work for a long time, the challenges are mounting. Every day on my desk this week, there’s a new alert about a homeless shelter. For every one alert that comes up for a housing lottery, we have about 60,000 people applying for units. We need to move aggressively, but it doesn’t mean developers don’t have the responsibility to work with communities.”

Richards pointed to the long list of promised community benefits and union agreements that the developers have negotiated over four years of community meetings. The development’s community hub will include a free medical clinic and day care operated by the Floating Hospital; space for the LGBT Network’s Q Center, which provides health care to queer New Yorkers; a tech lab and job training programs operated by the Queens Public Library and local nonprofit Urban Upbound; and after-school programs from the Jacob A. Riis Neighborhood Settlement.

The developers have also struck deals with three labor unions — 32BJ SEIU, District Council 9 and Laborers Local 79. But they have yet to finalize an agreement with the politically influential city carpenters union, which has been known to sway Council members in favor of controversial rezonings.

In addition, the developers said they would upgrade the area’s sewers and electrical grid, power and heat the new buildings exclusively with electricity, and study the possibility of using a geothermal district heating system to heat the whole development in an energy-efficient fashion.

“I will champion a project that I believe in,” Richards said. “We’re not going to be the borough of tow pound lots, truck depots. We’re in an affordability crisis and we need to make sure we’re housing people.”

Both Richards and the development team point out that Astoria and northern Long Island City — which comprise Queens Community Board 1 — have produced only 470 affordable apartments since 2014, of which only 102 were for low-income New Yorkers.

“When I hear rents have been driven up, I say, ‘Yes, we didn’t have this public-private partnership to produce rent stabilization and jobs,’ ” Richards said.

During last week’s hearing, the developers argued that the project was an outlier compared to the typical, 25 percent affordable new construction project. “Compared to the last eight years, it nearly triples the amount of affordable housing that has been brought to this community,” said Martin, the Bedrock executive. “No recent rezoning that has come before the Council has the breadth and depth of affordability that Innovation QNS has.”

Still, opponents of Innovation QNS trust neither the developers nor the city.

“They’re all billionaire firms,” said Fariha Akhtar, an organizer with CAAV, a nonprofit that works with Asian immigrant communities. “The amount of money we’re talking about should be put into perspective.”

Despite the developers’ commitments, Akhtar argued that “the 15 percent city subsidy for affordable housing is not in HPD’s budget. It’s a media talking point. What we’re really looking at is the bare minimum at 25 percent [mandatory inclusionary housing], and it’s not enough. It’s still incredibly unaffordable to people who live in this area. If Donovan Richards or the developers are able to procure a 15 percent subsidy from the city, the question is whether public money should be going towards billionaire profits. And that only gets you 40 percent affordable.”

Akhtar and other opponents share Won’s position: Innovation QNS should be 55 percent affordable, and that the additional subsidy should come out of the developer’s pocket, not the city’s.

The City Council’s zoning subcommittee and land use committees have to vote on the proposal within the next month, and then the full Council must vote to approve or disapprove the project before Thanksgiving. After the Council vote, the mayor has the option to veto the rezoning. However, Mayor Eric Adams said earlier this month that he supports Innovation QNS and wants to work with Won to reach a deal.

Ultimately, the divide on Innovation QNS was epitomized by a charged but respectful exchange between Richards and Won during last week’s City Council hearing.

“As I speak, hundreds of asylum seekers are stepping off the buses in Port Authority,” said Richards. “They deserve better than to wait indefinitely in a shelter or tent, as we pretend that talking about affordability is more than building it. To say no to this level of affordability that we have negotiated would be devastating and, quite frankly, irresponsible. I ask the subcommittee to vote yes on this project as you continue your negotiations. But the answer has to be to get to a yes.”

When activists in the gallery of the Council chambers booed, Richards said, “The people booing have homes. We’re here to fight for people who don’t.”

In reply, Won said, “We can’t believe that the trickle-down economy is going to bring affordable housing for working class people. If that was the answer, since Bloomberg and de Blasio, when we built more than 25,000 units in Long Island City, we’d see a difference in rent, instead of 45 percent increases in rent. The markets are leveled, and we’re talking about completely different subsets of the market when we talk about luxury apartments and affordable units.”