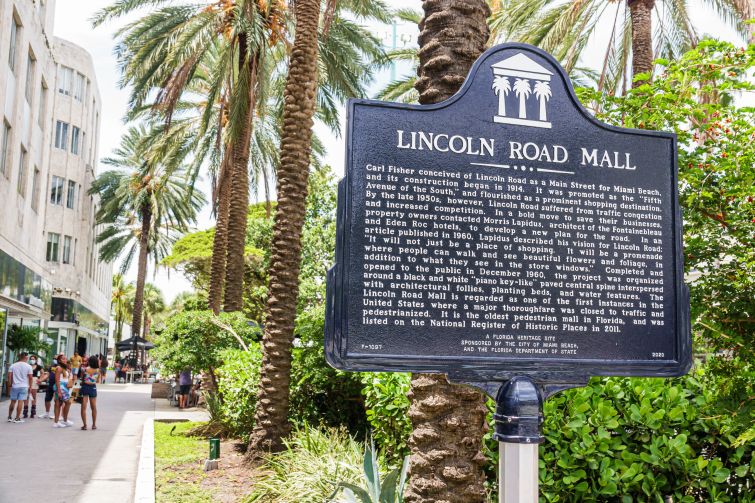 In the 1960s and 1970s, shiny new shopping malls sprang up in suburbs everywhere, and urban planners grew desperate to save downtowns from being hollowed.

Their solution: Transform commercial strips into car-free pedestrian malls. The strategy largely flopped. Most cities that experimented with pedestrian-only high streets admitted defeat and abandoned the projects long ago.

But Miami Beach’s Lincoln Road, which closed to vehicles in the early 1960s, remains among the minority of pedestrian malls still blocked to cars.

“People ask why. The ‘why’ is that the most-visited destination in Florida is the beach,” said Stephen Bittel, head of Terranova Corporation and a major property owner on Lincoln Road. The eastern end of Miami Beach’s pedestrian mall is just a couple blocks from the ocean.

“That’s the starting magic,” Bittel said. “The beach is what draws people to Miami, and when they’re not at the beach, they’re at Lincoln Road.”

Stephan Schmidt, an associate professor of city and regional planning at Cornell University, agrees. For an article published last year in the Journal of Urbanism, Schmidt analyzed more than 120 pedestrian malls and found barely 40 still existed decades after the pedestrian mall fad. The rest – including pedestrian malls in Chicago, Galveston, Texas, Yuma, Ariz., and Fayetteville, N.C. – long ago reopened to vehicle traffic.

Among the survivors are pedestrian malls in college towns such as Boulder, Colo., and Charlottesville, Va., and near major tourist attractions in Boston and New Orleans.

“[Lincoln Road] checks a lot of the boxes in terms of what our model found was significant for explaining longevity,” Schmidt told Commercial Observer. “Tourist destination, close to a beach, the number of sunny days is above average, population density is pretty high. The only strike against it is its length. Shorter malls tend to have a higher survival rate.”

Lincoln Road is some 3,000 feet long. Many of the surviving pedestrian malls cover less than 1,000 feet.

Lincoln Road was constructed more than a century ago, long before pedestrian malls became a nationwide craze. Workers cleared mangroves to make a pathway from the Atlantic Ocean to Biscayne Bay, and the new thoroughfare was named for Abraham Lincoln.

In its first heyday, Lincoln Road was viewed as an equal to high street retail meccas like Fifth Avenue, Michigan Avenue and Rodeo Drive. Car dealers, furriers and luxury merchants lined the strip.

The street, then open to vehicles, was “the public center of swank,” Ann Armbruster wrote in The Life and Times of Miami Beach. Tenants included the Saks Fifth Avenue department store and high-end jewelers.

“Making a purchase on Lincoln Road was reserved for the wealthy,” Armbruster wrote. “For everyone else, a trip there was a special occasion.”

But the magic soon faded. In an early blow, Miami Beach hoteliers began to include space for luxury retail shops adjacent to their lobbies, said Lyle Stern, president of the Lincoln Road Business Improvement District. That practice created competition for Lincoln Road merchants.

Then came the Bal Harbour Shops, which opened at 9700 Collins Avenue in the mid-1960s and replaced Lincoln Road as a destination for luxury shopping. That mall continues to thrive today.

A victim of that disruption, Lincoln Road emptied in the years that followed, and the remaining tenants were decidedly downscale.

“There were a lot of junky T-shirt shops on Lincoln Road,” Bittel said.

The street hit bottom in the 1980s, mirroring the trajectory of many pedestrian malls. Miami Beach wasn’t cool, and a pedestrian-oriented strip seemed out of touch with South Florida’s car-centered culture.

“That fairly well tracks the arc and evolution of pedestrian malls,” Cornell’s Schmidt said. “The nadir of urban development was the early ’80s.”

In the 1990s, Miami Beach gentrified, and so did Lincoln Road. Entrepreneur Mitchell Kaplan took a chance by opening a Books & Books location on the street in 1989. Amid South Beach’s renaissance, Lincoln Road became a hipster hub featuring art galleries, sidewalk cafes and an independent cinema.

By the 2010s, Lincoln Road was thriving again — so much so that its tenant mix looked a lot like that of the suburban malls that once competed with urban cores. Apple, Nike and Starbucks opened locations along the road.

A few years ago, Lincoln Road rents had soared to $350 a square foot – a number that proved eye-wateringly high for some tenants. One notable casualty was Books & Books, which closed its Lincoln Road location in early 2020.

“The rent is way too high for independent small businesses,” Kaplan told New Times at the time. “And I finally said, with all of the big boxes that were opening, that Lincoln Road was no longer the street I wanted to be on.”

“I think we all romanticize a moment in time on Lincoln Road that never really was,” Bittel said.

Lincoln Road did hit a ceiling in terms of how much retailers were willing to pay to operate there. Rental rates have fallen in recent years, and pandemic lockdowns dealt a blow to tourist traffic.

“We’ve come off a tough four or five years. Rents aren’t where they were five years ago, but they’re trending up again,” Bittel said.

“We want Apple and Nike to bring them in, and we want Unfashional and Callista Couture to surprise and wow them,” Bittel said.

The Business Improvement District’s Stern stresses the street’s focus on trees, an important feature in keeping the street walkable on sweltering days.

“I’m not sure there is one street that has the amount of landscaping and foliage that Lincoln Road does,” Stern said.

Despite its recent ups and downs, Lincoln Road’s status as a pedestrian-only zone seems secure. Schmidt, who performed autopsies on dozens of pedestrian malls, says the car-free concept is back in vogue.

“These are no longer seen as a last-ditch, let’s-save-downtown move,” Schmidt said. “It’s now seen as a neighborhood amenity.”