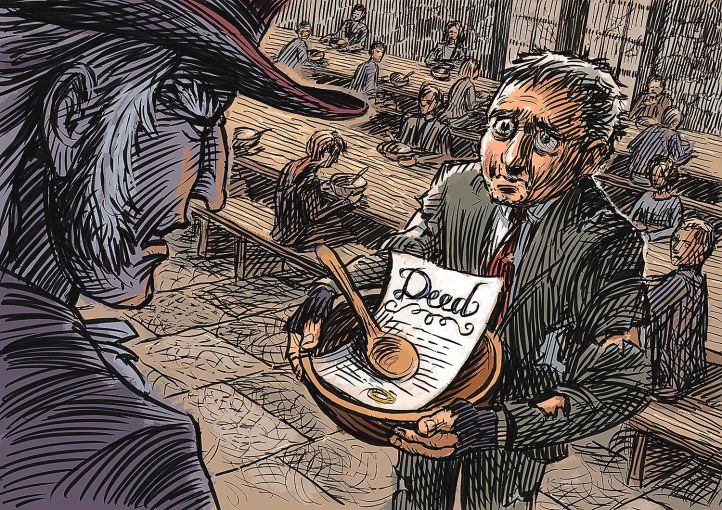 Unsteady markets make for safe investments, so hearing that the state of the refinance market resembles a kaleidoscope isn’t too reassuring.

“The office market is a falling knife right now,” Zampa said, adding the situation is dire nationally but especially in the West Coast markets he covers, including San Francisco, Los Angeles and Seattle. “The top 10 to 20 percent of the buildings in every central business district are going to capture the market share of workers who are going back to the office. And we’re left with a huge swath of buildings where nobody knows.”

The unknown is as much about present data as it is about future activity. It’s incredibly challenging to evaluate buildings, and financing for them, because rents are in flux and creating comps is challenging. Buildings may be leased yet remain significantly unoccupied or underutilized, and that creates significant hurdles for lenders and owners.

“The lenders are saying, ‘No one is here, how do I underwrite this?’ ” Zampa said. “They’re just taking the buildings with good tenants, and that’s a huge problem.”

Many expected the period after Labor Day to mark a large-scale return to office. That hasn’t yet happened, with prominent companies such as Apple and KPMG instead announcing in advance a hybrid approach to the workplace wherein workers come in a few days a week at most. Security firm Kastle Systems, which tracks office entry swipes, pegged the national office occupancy in major markets at 43 percent for most of August.

The pain isn’t evenly distributed across markets, either. Some have seen more signs of life, and real estate activity, than others. But with many firms shrinking their footprints, and anticipation of a recession on the rise, owners and operators are facing mounting challenges, including refinancing. And lenders have pulled back, with the Mortgage Bankers Association (MBA) predicting a slowdown in the issuance of commercial mortgages in the second half of the year.

“The market is very fluid, and every deal is underwritten differently depending on risk,” said Susan Hill, a senior managing director of capital markets at JLL. “The market is liquid with increased scrutiny on underwriting assumptions and real-time market data points.”

That risk, said Zampa, has kept significant sectors of the capital market, especially big banks and the CMBS world, on the sidelines for all but the most surefire deals. Some regional banks are trying to step in and take market share they’d usually lose to the bigger players, but it’s not making up the difference. Hill added that smaller, local or regional banks or credit companies are handling much of the refinancing for Class B and C buildings. These companies are being “inundated” with loan requests.

The challenging conditions for financing will hit Class B and C office buildings hard, adds Hill, especially those that will have trouble adding amenities and more common space, or reside in locations that aren’t walkable. Offices with solid tenants and good business plans will likely still be able to do business. A $128 million refi for 77 Water Street in Manhattan broke through bank reticence in August thanks to strong tenants, including a law firm and the engineering firm Arup.

“There is still a very large unknown around how the office is going to change going forward,” Hill said.

Refinancing for commercial properties overall has soared in recent quarters, bouncing back significantly after a drop during the early months of the pandemic. A 23 percent overall increase in commercial property values last year, according to MBA research, offered plenty of reasons to refinance. In the first quarter of 2020, commercial refinancing counts stood at 31,383, according to ATTOM Data. That number dipped throughout the rest of the year before surging in the fourth quarter of 2020, and hitting a high of 46,434 in the second quarter of 2022 (the highest total since Q2 of 2008).

“Last year, we were on a tear,” said Zampa. “Many of my competitors were having a great, if not their best, year.”

Those stats may conceal the challenges faced by older office properties in particular. Zampa noted that the apartment market is still the most liquid in terms of financing, followed by industrial, then life sciences, segments that have been growing in demand and investment at substantial rates.

The ATTOM data also doesn’t highlight the bifurcation taking place among the office sector. Newer top-tier, Class A stock can find the refinancing needed to maintain and upgrade, and to add the kind of post-pandemic amenities — enhanced common and collaborative space, indoor-outdoor space and tech — that make them even more desirable (and justify higher rents to pay for today’s higher borrowing costs). The rest of the market, especially significantly older buildings, face the shock of rising interest rates with lower occupancy.

Adam Gibbons, managing director of investments at CIM Group, a large investor, told Commercial Property Executive back in March that CIM is “very, very cautious about lending on Class B commodity older products where there’s not a clear path to how and when those buildings will be leased up.”

Zampa says owners in those situations can’t get extensions on their loans, so he’s suggesting they ask their lenders for a paydown and extension. The takeout funding just isn’t there otherwise, and their payments might triple in the current interest rate environment.

Many office owners may not have enough money to float their loans for another year. There are “cracks” forming, Zampa said. Without enough liquidity to get new loans, there may be a very rough 12 to 18 months ahead for owners of less desirable office properties who lose, or can’t attract, tenants and have little to no income. Prices would have to fall substantially for developers to make a large-scale push for costly office-to-residential conversions, or for investors to see a value play in distressed assets.

Jamie Woodwell, the MBA’s vice president of commercial real estate research, agrees. Unlike earlier recessions, in which companies went bankrupt and then discharged their lease obligations, immediately hurting landlords, tenants aren’t disappearing unexpectedly. So it’s taking a lot longer to understand where firms are and how much of their footprint they’ll ultimately give up, and loans continue to perform well.

Zampa said his team even discussed what cities can do to help stabilize the situation, such as corporate tax incentives triggered by office occupancy and utilization, to help push corporations to get employees back to the offices. There’s a need to jumpstart downtowns in certain cities or risk significant reduction in tax receipts, and resultant municipal budget crises.

Analysts are hoping for the office market to bottom out so they can get comps to underwrite, and get data to triangulate value.

“We really need our cities back, and I’m not sure at what point that happens,” Zampa said. “The market is completely frozen. This is a time where you hug your banker.”