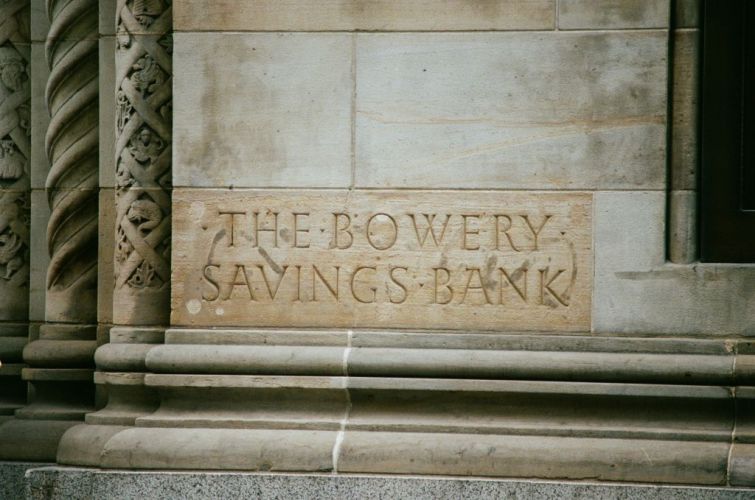 The owners of Lower East Side party venue the Bowery Savings Bank filed for Chapter 11 protection to stave off a forced sale after defaulting on their $12 million loan from Wells Fargo, according to documents filed in U.S. Bankruptcy Court for the Southern District of New York on Aug. 29.

Michael Marvisi, who owns the building with his brother David Marvisi, said in court documents the duo’s firm, 130 Bowery Acquisition, was forced to declare bankruptcy and fell behind on its loan once the building’s sole tenant, events organizer Capitale NYC, missed its rent payments during the pandemic, court documents show.

The Marvisi brothers put the 40,000-square-foot former bank at 130 Bowery Street up for sale in January for about $35 million, a month before Wells Fargo sued them for allegedly missing two years of payments on their loan. Wells Fargo hoped to force a sale of the 129-year-old building through an auction, but a bankruptcy filing will give the Marvisis time to sell the property at a higher price, Adam Stein-Sapir, a bankruptcy expert and portfolio manager at Pioneer Funding Group, who is not involved in the case, told Commercial Observer.

“The most likely scenario is a sale of the building,” Stein-Sapir said. “Importantly, [Michael Marvisi] personally guaranteed the loan. If the building sells for less than $12 million, and Wells Fargo doesn’t get all their money back, they’re going to sue Marvisi for the difference.”

The Marvisis first nabbed the Bowery Savings Bank, designed by famed Gilded Age architect Stanford White, in 2017 in a deal that valued the property at $33 million, according to property records. They first tried to offload the building in 2019 through an auction and hoped to get more than $50 million for it, Bloomberg reported.

But even if the Marvisis avoid a forced sale, they might not be able to recoup their initial investment since buyers might not be clamoring for a property with a single tenant that can’t pay its bill, Stein-Sapir said.

Capitale, which has hosted high-end parties for Columbia University and Goldman Sachs, rents the property for $118,571 per month in a lease that won’t expire until 2032, according to court records. It’s unclear how many months Capitale has gone without paying for the space.

The Marvisis could also refinance the property to escape the “debt spiral” the brothers found themselves in after they first defaulted on the loan in August 2020, which let Wells Fargo charge the duo a higher interest rate of 9.8 percent on their late payments, Stein-Sapir said. But finding new capital, especially given the high interest rate environment, could be a tricky task, he added.

The lawsuit is not the only legal trouble David Marvisi has recently faced. He was found guilty of allowing a public nuisance after he rented his Los Angeles home to a group of TikTok stars hosting a party in the summer of 2020, violating the area’s COVID-19 public gathering rules, according to Spectrum News.

Capitale, Marvisis’ attorney and Wells Fargo did not immediately respond to requests for comment.