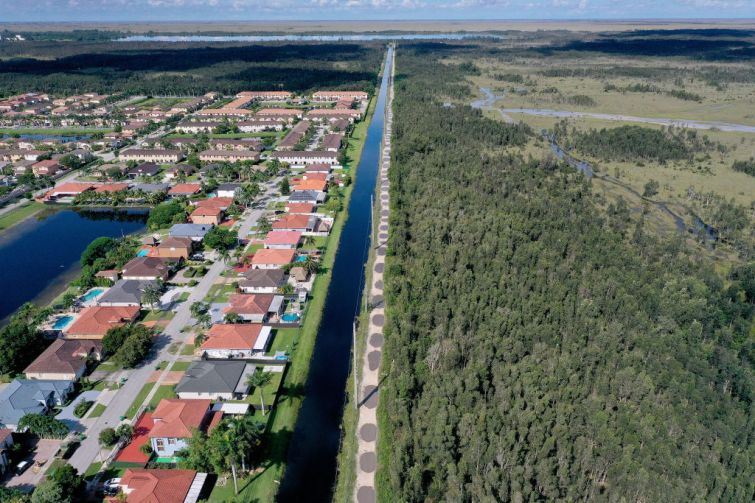 Miami-Dade County Commissioners have scheduled a date to revisit a proposal to move the county’s urban development border (UDB), the boundary outside of which land may not be developed.

A decision on the boundary adjustment, which would make way for a large industrial park in South Dade proposed by developer Aligned Real Estate Holdings, is now on the planning agenda for Sept. 22. The vote is a long time coming, and was last delayed at a public hearing in June. The decision has garnered passionate supporters and detractors given the proposed development’s proximity to the Biscayne Bay ecosystem, among other concerns.

Aligned has proposed an industrial park on 800 acres of farmland in South Dade, east of a mangrove preserve along Biscayne Bay. Currently in use to farm palm trees and sweet corn, the land​​ is outside the UDB and therefore not available for any development. To approve the park, commissioners would have to move that demarcation line for the first time in nine years, and would also be acquired to adjust flood maps to allow development in areas vulnerable to flooding.

The development plan would bring 9 million square feet of industrial space to the area, named the South Dade Logistics and Technology District. The site is directly adjacent to the Florida Turnpike, making it an ideal site for a logistics park. The developer claims construction will meet current standards and account for sea-level rise and other environmental concerns. In addition, the developers will contribute funds for infrastructure that would address water quality, road upgrades and other necessary improvements.

“That new shiny infrastructure,” said one resident during the public hearing in June. “Those aren’t gifts to the county; it’s what they need for the development, which it wouldn’t need without the industrial.”

Leonard Abess, one of the landowners within Aligned’s footprint, urged the commissioners to vote no. “This is the best land in America,” said Abbess, who could make $100 million off the sale of his 160 acres of land. “There is no profit if you lose your soul.”

The decision comes amid an explosion of industrial demand and development, which is only now beginning to slow due to inflation and other economic concerns. Some developers, including Aligned, believe that expanding the UDB is necessary for the region’s growth.

But, according to the county’s own estimates, there is enough land zoned for industrial use within the UDB, and the issue is set to be revisited in 2040. “As of today, there has been no demonstrated need, and this why in essence I can’t imagine right now what need could be documented,” said one commissioner, while debating whether to vote or allow for further revisions from Aligned.

The developers and their supporters championed the expected economic benefits, which include $250 million in revenue and job creation, of which 25 percent would be set aside for local residents. “The UDB is not the holy grail,” another disgruntled commissioner said.

But the environmental concerns are the real sticking point, given that part of the land is a high-hazard area first to be cleared during a hurricane, and that it’s right on the Biscayne Bay, whose ecosystem is already fragile.

“Every agency in this state agrees — this could jeopardize the preservation work that’s happening over there,” said Commissioner Jean Monestine. “As much as we want to be open-minded about it because we don’t want to interfere with business, we can be pro-business and pro-environment at the same time.”

But the developer felt it was a false choice between saving Biscayne Bay and economic development. “You’re missing an opportunity,” a representative for Aligned said. “This might be your best opportunity to get both.”

Many of the commissioners will be replaced in the November election, which could set the whole process back to the beginning if no decision is reached before then.