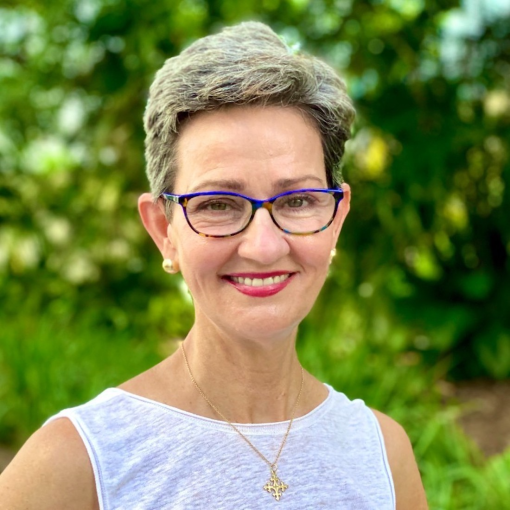 Meg Daly calls herself a “crazy citizen.” She had — by her own admission — no “track record in building a 120-acre park and 10-mile trail.” And yet she’s doing just that. In central Miami, no less.

Miamians can thank Daly for the year-old Underline, a park underneath the Metrorail, an elevated tram line that runs through the southern end of Miami. Similar in concept to New York’s High Line and Atlanta’s BeltLine, the Underline converted underutilized space near a rail line into a popular pedestrian walkway.

Raised in the Magic City, Daly worked in the private sector, a career that culminated with her becoming the chief marketing officer of ContractRoom, a transactions management software platform. A bike accident nine years ago sparked the idea for the Underline park.

She founded the nonprofit Friends of the Underline, which spearheaded the development of the urban park. Perhaps lobbying government officials for a public project is a trait that runs in her family. Daly’s late father, prominent attorney Parker Thomson, led the organization that secured funding for the construction and ongoing operations of the Adrienne Arsht Performing Arts Center, now a central part of Miami’s cultural scene and skyline.

Daly’s pipe dream became reality when the first phase of The Underline, located along the edge of Miami’s bustling Brickell district, opened last year. Work on the second phase, which will span 2.14 miles, is already underway and is slated to be finished next year. A third phase all the way down to Dadeland will complete the park by 2025. The total cost of construction is pegged at over $100 million.

Meg Daly spoke with Commercial Observer to discuss why she embarked on the journey to create a park.

Commercial Observer: How did you hatch the idea for the Underline Park?

So how did you create a plan for that?

I talked to some people who are pretty good at that. That included the current head of the [Miami-Dade] County Parks Department, Maria Nardi. She became a very good friend of mine. I think she’s brilliant.

I also spoke to my dad, who was a civic leader for many years and was the founder of the Performing Arts Center. If anybody knows how to get a public-private project done, it’s probably my dad, Parker Thomson. And both of them were very encouraging and said, “This is a big idea. It’s probably gonna be hard. But, sometimes if it’s easy, it’s not worth it.”

Was the High Line in New York an inspiration?

With the constriction of cities and the cost of land, repurposing derelict land or giving them more than one intention, one purpose — sort of this hybrid use — is the new category of parks in major urban areas.

At the Underline Park, we’re basically repurposing all the dead land below the metro rail. The bulk of our funding is transportation dollars, not park dollars. We’re closer to the Atlanta BeltLine than the High Line. The BeltLine had a transportation component. It’s a 22-mile sort of an oval around Atlanta, a rail-to-trail project.

What’s your big hope for the Underline?

I hope it changes the way residents engage with the city. I hope that people say that it is safe, and that it provides opportunities for people to walk and bike in the city. I grew up here and I used to ride my bike to school. A generation later, I wouldn’t let my kids ride their bikes to school. And I hope we give that freedom back to our children, but you have to make it safe first.

What’s surprised you about the park since it opened a year and half ago?

From my office, I look directly onto the Underline, right on First Avenue. And I remember when the construction tents came down four days before they were supposed to and we didn’t get a heads-up. I was like, “What are people going to do?”

So that really surprised me. I thought it would take some time for adoption. That’s the beauty of good design is that people think it’s always been there and always part of their lives.

What else surprised me? Seems like everybody in our neighborhood has a dog. We used like 20,000 dog bags in eight months. So we had to add almost 100 percent more dog bag receptacles.

Do you think Miami is doing enough to be a pedestrian, bike-friendly city?

Our city was designed for cars. That’s the best of modern, 1945, 1950s promise is that everybody can own a car and go without other people next to them. But it’s so inefficient.

There is a very big plan in place called the SMART plan for countywide expansion of mass transit. It’s going to take a lot of courage to build it out because it costs a lot of money. Everything that comes with that should be multimodal. Miami-Dade County Mayor [Daniella Levine] Cava is working on having a bike and pedestrian trail alongside the bus rapid transit. If there’s light rail, there should be a walking and biking trail below it.

During the pandemic, parks played such an important role for people to safely socialize around the world. But Miami remained completely open. What role did Miami parks play during this time?

New Yorkers love their parks. That’s their green space. And I think people here are seeing a park is not just good for COVID but it’s also really good for your mental health, to play. So I think it created a deep appreciation for parks

I’m seeing some significant investment in parks worldwide. So it’s good to see because I started with how much I love parks.

Commercial Observer primarily covers developers. So I’m curious to know your opinion about parks that developers have built, often as a concession to receive approval for a project.

That’s a really tough question to answer because it’s really all over the map. Every one of those situations is unique. But I do think there’s value in a public-private partnership. I think it works a lot more than not — and I come from the public sector.

I’m finding that there is a trust now between public and private saying that maybe we’re better together than working against each other. If you’re this crazy citizen like I am, without any track record in building a 120-acre park and 10-mile trail, right? Well, maybe she’s got something of value; maybe it’s that entrepreneurial spirit. Maybe it’s that you hunger to get things done in the fastest time possible.