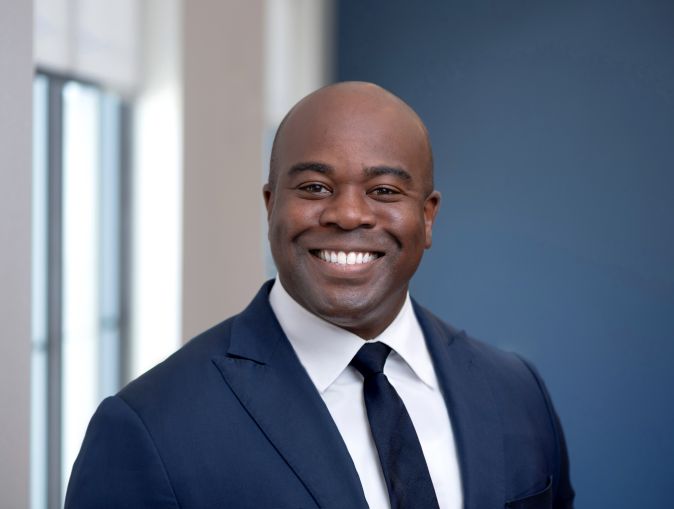 Chinedum Ndukwe squared off against some of the top receivers of all time during his five seasons as a defensive back in the National Football League. Today, he thrives on playing offense on a different kind of playing field: commercial real estate.

Ndukwe, who played free safety for the Cincinnati Bengals from 2007 to 2010 before a short stint with the Oakland Raiders during the 2011 season, entered the CRE industry early in his NFL career with the founding of development firm Kingsley Consulting (also known as Kingsley + Co.) in 2008. The Cincinnati-based developer has expanded beyond its multifamily focus into the hotel sector as one of the few Black-owned Marriott franchisees in the nation.

The University of Notre Dame graduate spoke with Commercial Observer about his path into real estate, how market volatility is affecting investment decisions, his efforts to mentor NFL rookies on the importance of fiscal responsibility, and whether closing a large deal or recording a big interception is more exciting.

Ndukwe’s comments have been edited for length and clarity.

Commercial Observer: You were a double major in marketing and psychology at Notre Dame. When did you first discover your interest in commercial real estate?

Chinedum Ndukwe: I’m the son of two Nigerian immigrants. My dad is a mechanical engineer and my mom was a registered nurse. Both of them always had 9-to-5 [jobs], but both of them were always interested in real estate. A typical day for them was work 9 to 5, come home, spend some time with the kids and then we’d view properties, and so that was my first exposure into real estate investing. So I was exposed at a very early age to the aspect of investing in real estate. When I started playing for the Bengals after going to Notre Dame, I started naturally, after making a little bit of money, to invest in real estate — just single-family homes, two-family homes. And then when I really understood and realized that I had a knack for finding opportunities, fortunately enough I was able to spend a lot of time with commercial real estate investors and developers, which really opened my eyes to commercial real estate.

You founded your commercial real estate company in 2008 shortly after your NFL career began with the Bengals. How was it balancing that with your playing career?

The thing that people don’t realize is during the season, as an NFL player, it is long days. You’re.getting to the stadium early, you’re prepping for that week, and you really don’t have a ton of time during the season. But after the season you have a ton of free time, and those were the times that I really would spend a lot of effort and really focus on the properties and investing and then kind of building the craft of real estate investing. I would do a little bit during the season when we had off days. Then I would really try to accelerate opportunities with different projects during those offseasons.

What sectors of commercial real estate is your firm most focused on now?

We started with single-family and two-family homes and slowly transitioned to multifamily. Some of those properties that I invested early on in and around the University of Cincinnati’s campus, we still own some of those smaller properties. But we primarily focus now on multifamily. Not only just market-rate housing, as there’s a huge need for affordable housing not just in Ohio, but throughout the country. I mean, the price of rents just don’t really line up with the cost to build these units. So we’re really heavily involved in affordable housing. We secured our second Low Income Housing Tax Credit deal from the State of Ohio this past round, so we’re building another 50 senior affordable housing units.

We also have limited service hotels. We’re one of a handful of African American Marriott franchisees in the country. We have one at the University of Cincinnati’s campus, and we also have a dual-branded Comfort Suites and MainStay hotel.

During your NFL career you witnessed some fellow players squander millions. By contrast, you were able to invest and save. Where did you develop this discipline, and what went into your decision to tackle commercial real estate as one of these investments?

That’s a great question, and honestly as athletes we have so many people that are always coming at us trying to get us to invest in this opportunity, this business. But what I learned early on is that some of the very successful entrepreneurs in this country had a really solid portfolio of real estate. I was fortunate enough to have a passion for real estate investing and real estate developing, and not a lot of guys have that. And any players that reach out to me about opportunities and just for advice I always tell them to start working as you’re playing right now to really figure out what else you’re interested in. The typical athlete and typical professional football player is alpha and very confident looking for action, and so I think oftentimes you can have a tendency to make bad decisions related to investing. And then just trying to find the right people to almost force them to become mentors is something I also try to encourage people to do as well.

Explain the work you are doing now in terms of offering guidance to NFL rookies about becoming fiscally responsible as they get set to make millions of dollars after in many cases growing up with impoverished backgrounds?

I think what’s happening now, especially with the rise of [name, image and likeness in college sports], is it is just another layer of opportunity not only just for the players themselves but also for some of those sharks that are out there that I just referenced. You read these horror stories all the time about athletes that get taken advantage of, and so the things I always try to tell people is to try to find something that you really understand and spend the time researching. And then also surrounding yourself with good people is also very important. I’ve been really fortunate to have a great family, but not everybody has that type of upbringing, and I’m very cognizant of that. I encourage people all the time to find someone you respect that is doing things the right way and try to befriend them. As athletes, we’re all coachable. For the most part, to have the success of getting to that highest level you have to be coachable, and I think that’s the same type of discipline that someone needs to have as they’re transitioning and investing in other opportunities.

Switching gears back to your football days, who was the toughest player you competed against in either the NFL or college?

As a defensive back I always think about the people that I had to really game-plan against. Adrian Peterson was just so talented, and I don’t think we appreciate how special he was. When he was with the Vikings he had the ability to run you over, maybe make people miss at the line of scrimmage. I think he was someone that was always really challenging to compete against. And I was fortunate enough to play against the Patriots early on in my career. I remember looking up and Randy Moss was out wide, Wes Welker was in the slot, Kevin Falk was in the backfield and then Tom Brady was a quarterback, and you’re sitting there like “Goodness gracious.” They were a really special group of people that was so tough to game-plan for as a team.

As a Cincinnati native and former Bengal player, how was the experience this past year seeing the team reach the Super Bowl for the first time in 33 years? And are you very active with the franchise?

I’m not as active as I probably should be, but I have three kids under the age of 4, which is a whole other conversation talking about game-planning (laughing). But I think for me the economic impact that the Bengals had on the city as a whole was great. We had people that were coming to the city of Cincinnati, just to be around the Bengals, so our hotels were full. As we’re looking at Joe Burrow and some of the other talented guys that we have and trying to keep that team intact, I think it’s not only good for the Brown family [owners of the Bengals], because they’ve done an amazing job, but the city itself. I think that’s something that we always overlook is the economic impact that having a successful franchise, especially in football, does for the city and also the community.

Turning back to commercial real estate, obviously we’re experiencing a lot of market volatility at the moment. How has that impacted your investment decisions?

We’re a boutique firm, but as a company we’re trying to consolidate as much as possible to free up as much cash because we just believe that there’s going to be strong buying opportunities that are going to continue to present themselves. For us we’re still very active, and oftentimes we’ll find opportunities. There are really fine people who bring us deals because they know that we’re actively looking for not only on-market development opportunities, but off-market development opportunities. People are talking about recessions, but for us we see that as an opportunity to find some good projects to acquire, redevelop and reposition.

The commercial real estate profession has historically lacked diversity. What do you think are some key steps that can be taken to improve this?

Another great question that I talk about quite a bit. I think that with diversity and inclusion, especially in commercial real estate, you have to lead from the front. So as a developer, on the projects that we build from the ground up especially, I think that’s a competitive advantage for us to require diversity and inclusion not only just on the ownership piece of it, but also on the subcontract and contracts and the general contractors that we use. We really need to enforce the fact that diversity and inclusion is important. And you see a lot more on the subcontractor front, but there needs to be more on the ownership of these buildings.

On some of the projects that we do, we primarily focus on urban neighborhoods that have not only African Americans, but Latino populations, female veterans, and we talk about how it’s possible for you to be an owner and you can really own this building, you can really own the house that you’re living in. You don’t always have to rent. This can be a process and a stepping stone to ownership. And so I think that not only firms like ours but other firms that are very successful really need to start having that conversation with young diverse people early on. That’s the way I got started because I understood early on that family can own buildings and that is possible in America. So I think that’s one of the key critical points.

Lastly, on a lighter note, if you had the choice between closing a big development deal or a game-winning interception, what would you pick?

I’m taking that interception. Getting a big deal closed or buying something and then selling it at a profit, I gotta tell you that’s the closest thing to playing on Sundays, whether it is playing at Paul Brown Stadium or at the University of Notre Dame on Saturdays. Doing deals is as close as I can get, but there’s no better feeling than making a big play in front of 80,000, 90,000 people. It’s that feeling and that motivation that we always try to get on a daily basis with our projects and the impact we have on the community — but I would take the big play over it.