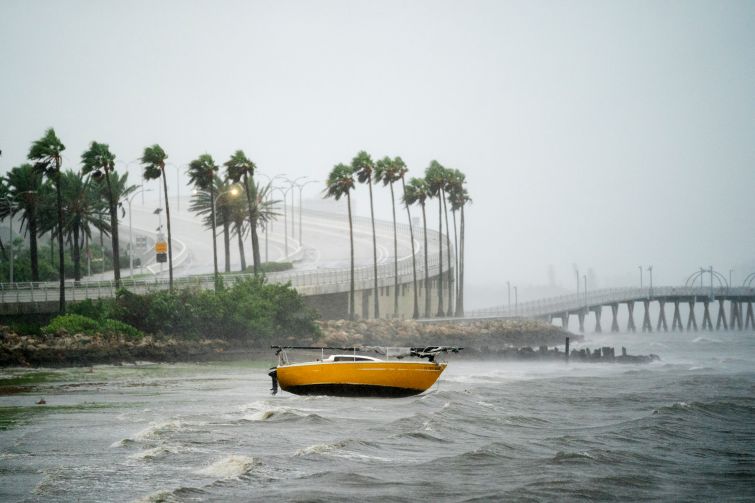 Hurricane Ian is barreling toward Florida’s western shore, in what experts fear could be one of the most powerful and destructive hurricanes to hit the state in years.

The Category 4 hurricane is set to make landfall this afternoon between Fort Myers and Tampa. With sustained winds of 155 miles per hour — just shy of being designated as a Category 5 hurricane — Hurricane Ian could turn deadly, officials warn.

“A storm of this magnitude will produce catastrophic flooding and life-threatening storm surge on the Gulf Coast of Florida,” Gov. Ron DeSantis said Wednesday morning. “This is going to be a nasty, nasty day.”

In Charlotte County, just north of Fort Myers, the storm is expected to cause storm surge as high as 18 feet. In neighboring counties up through to Tampa, millions are under evacuation orders or advisories.

Florida has not seen such a powerful storm in recent years. Only two Category 5 hurricanes have hit the state: Hurricane Andrew in 1992, which killed more than 15 people, and Hurricane Michael in 2018.

To be sure, there’s no telling what the full human and economic damage the storm will cause in advance of its arrival. Already, Ian has turned south and east, most likely sparing the low-lying Tampa Bay area the worst of its fury.

Still, experts say Hurricane Ian could turn costly as it runs through Florida’s heavily developed and populated coast. Damages and economic losses could exceed $45 billion, according to a disaster modeler with Enki Research, who spoke to Bloomberg.

Across Hurricane Ian’s forecasted path through Georgia, real estate assets are worth an estimated $1.5 trillion, according to research by finance company MSCI. Of those, apartment properties, worth a combined $10 billion, may also face extreme flooding.

Hurricane Katrina, which devastated New Orleans in 2005 and still ranks as the most expensive storm, cost an estimated $50 billion.

While damage is all but certain, hurricanes are par for the course in Florida, and most — if not all — commercial real estate owners are prepared for these types of storms.

“Our storm preparations really are a year-round process,” said JLL’s Natalie Koglin, who’s based in Orlando and manages a 40 million-square-foot office and industrial portfolio across Florida.

These preparations include tabletop exercises that are revised at the beginning of each year. In the past week, her team has made sure to secure loose objects near properties, de-energize buildings, and bring elevators up beyond the first-floor landing for properties near water and at risk of flooding.

Koglin, who’s lived in Florida since 1995, isn’t surprised or all that fearful of Hurricane Ian. “That’s why we, as a team, prepare all year long for events like this,” the property manager said.