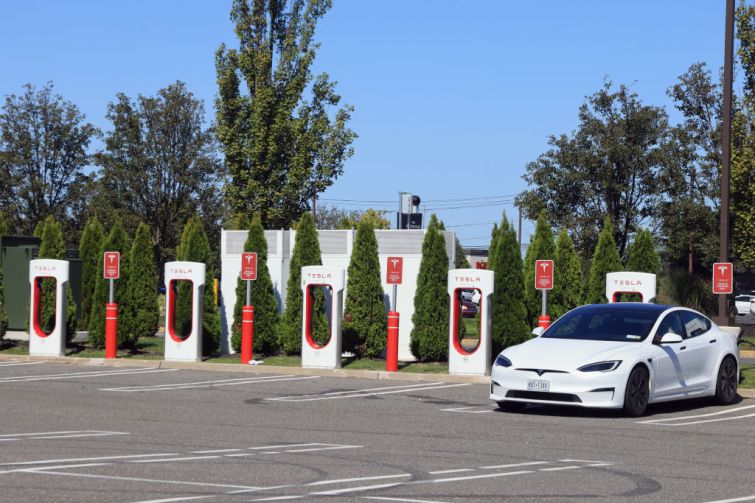 Electric vehicle charging stations like this one at a mall in Garden City, Long Island may soon proliferate across New York state, thanks to a dose of federal infrastructure funding. Bruce Bennett/Getty Images

Electric vehicle owners are going to have an easier time than ever powering across New York.

The Federal Highway Administration announced Tuesday that it had greenlighted the state’s plan to install more than 60,000 electric vehicle charging stations along major highways. The state transportation department plans to install charging stations roughly every 50 miles along New York highways, using a combination of federal electric vehicle funds and state incentives for private property owners. The U.S. Department of Transportation has committed $63 million in federal funding to help New York finance the network of new plugs.

Several major corridors are set to get the stations, including all of the interstate highways that crisscross the Empire State. The plan also applies to important state throughways like NY-17 (Southern Tier Expressway), NY-27 (Sunrise and Montauk highways), and NY-25 (Queens Boulevard, Hillside Avenue and Jericho Turnpike).

The New York State Department of Transportation will conduct a competitive request for proposals for owners of rest stops and other properties near highways to operate the charging stations. The state’s EV Make-Ready program—funded by Con Ed and PSEG Long Island—is expected to finance the installation of the roughly 60,000 electric vehicle charging plugs statewide. The funding will cover 50 to 100 percent of the equipment and installation costs for land owners. The New York Power Authority is also investing $250 million to build 800 charging stations statewide.

All told, the state aims to construct enough charging stations to accommodate 850,000 electric vehicles on the road in New York by 2025.

Every state in the country—along with D.C. and Puerto Rico—has been tasked with building electric vehicle chargers across roughly 75,000 miles of interstate highways. The federal government is giving states $1.5 billion total for the effort, drawing on a pool of funding created by the Bipartisan Infrastructure Law.

“America led the original automotive revolution in the last century, and, today, thanks to the historic resources in the president’s Bipartisan Infrastructure Law, we’re poised to lead in the 21st century with electric vehicles,” U.S. Transportation Secretary Pete Buttigieg said in a statement. “We have approved plans for all 50 States, Puerto Rico and the District of Columbia to help ensure that Americans in every part of the country—from the largest cities to the most rural communities—can be positioned to unlock the savings and benefits of electric vehicles.”