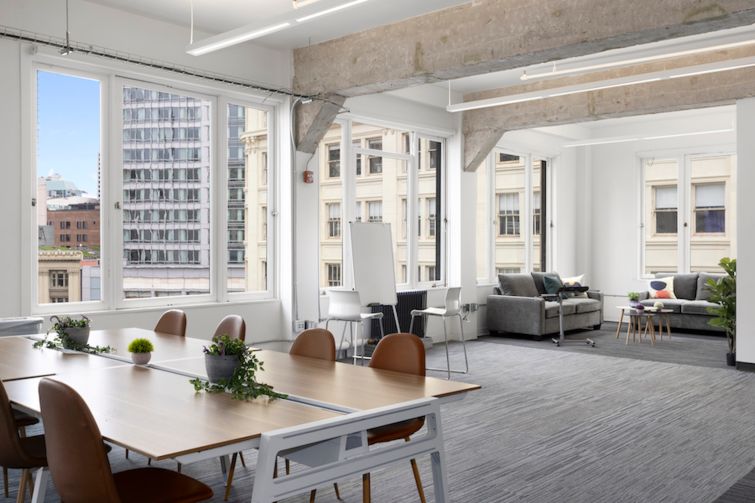 Codi was founded in 2018 by Christelle Rohaut and Dave Schuman to offer alternatives to traditional long-term leases with an end-to-end workplace platform that allows companies to basically outsource the office — changing the way companies lease and run their physical spaces as they grow and relocate. On average, Codi claimed it could decrease lease lengths from three years to just six months, with options for longer contracts if needed.

Unlike other flex providers, Codi’s model can be applied to companies that want their employees to work together in-person, but not necessarily five days a week, by offering twice-a-week private offices. This is ideal, Rohaut noted, for startups that find the coworking experience impersonal, but do not want the long-term commitments and risks required by traditional real estate.

“For building owners and property managers, our platform offers a steady stream of income and pre-vetted tenants,” Rohaut told Commercial Observer. “We manage each office so there’s little to no effort needed on their end. It’s essentially found money. For owners looking to sell their buildings or are waiting on longer-term lease deals, Codi means income where spaces would otherwise be vacant.”

Rohaut said the funding from Andreessen Horowitz will “enable us to expand further into the New York City and San Francisco markets, and allow us to grow in new regions.” It should also help Codi “accelerate” new products “aimed at building the leading end-to-end workplace management platform for our clients and landlords,” Rohaut added.

As part of the investment, Jeff Jordan, a general partner in Andreessen Horowitz, will join the board of Codi. Jordan also sits on the boards of Airbnb, Instacart and Pinterest, among others.

“I’m always looking for emerging marketplace companies that are disrupting the standard industry business model — and this is exactly what Codi’s doing for commercial office space in their quest to become an all-in-one private office management platform,” Jordan said in a prepared statement. “Today, thanks to their asset-light model, they can offer customers the perks of private office space, but with more flexible leasing terms, commuter-friendly locations and white-glove customer-service support.”