A planned change to carried-interest income were nixed by Sen. Kyrsten Sinema 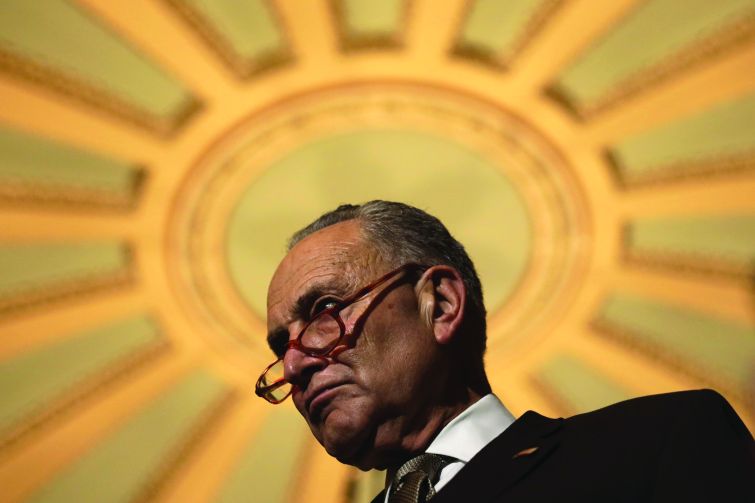 If all goes according to plan, the Senate will be debating the Inflation Reduction Act — an energy and health care package agreed on by Democrats — starting Saturday afternoon.

The roughly $739 billion bill, sponsored by Senate Majority Leader Chuck Schumer (D-NY) and Sen. Joe Manchin (D-WV), will provide $369 billion to boost clean energy production and adoption in the U.S., which would reduce emissions by about 40 percent of 2005 levels by 2030. That gets the U.S. close to President Biden‘s original goal of cutting emissions in half by the end of the decade.

The legislation also includes $64 billion for various health care initiatives, while the remaining $300-plus billion will go toward reducing the federal deficit. Most of it will be funded by tax enforcement, according to the Senate summary of the legislation.

The details are still being worked out, however. Late Thursday night, Sen. Kyrsten Sinema (D-AZ), the last Democratic holdout, signaled her support of the bill if certain changes were made to the tax provisions.

Originally, the largest chunk of the funding would have come from a requirement that corporations with more than $1 billion in profit pay the corporate minimum tax of 15 percent on book revenue, not taxable income. The requirement would go into effect in 2023 and is estimated to bring in $315 billion over 10 years, according to the Joint Committee on Taxation. (All spending and funding estimates are over the next decade.)

To gain Sinema’s vote, Democrats agreed to adjust the corporate tax rule and replace it with a 1 percent tax on stock buybacks, while a provision to fund $124 billion from other tax enforcement appears to have remained intact. Additionally, Sinema nixed a change to the carried-interest income that would have funded an additional $14 billion, according to estimates by the Congressional Budget Office.

While the total funding is small relative to other measures, carried interest is of special significance to the real estate industry, as it is frequently used by private equity firms, hedge funds and real estate companies to structure deals. Also called a “promote,” carried interest income refers to the portion of profits that go to the general partner as compensation. Those profits are taxed as long-term gains, which have much more favorable terms for companies, as long as they are held for three years.

The bill would have extended the holding period for carried interest income to five years, in order for it to be taxed as capital gains. As of now, the maximum tax rate for capital gains is 20 percent, compared with a maximum of 37 percent for regular income.

The carried interest rate has been on the congressional chopping block since before the Great Recession, with both Democrats and Republicans attempting to eliminate or revise it, since it is seen as a loophole for wealthy fund managers to pay less in taxes than regular Americans.

Sinema said in a statement that she would work on separate legislation to adjust the carried-interest loophole, according to the Wall Street Journal.

The bill carries with it significant upside. Even though it is focused on energy and health initiatives, it also provides a slate of tax credits, individual incentives, and other economic stimulus that would affect real estate.

First, pumping money into clean energy production is intended to make it both cheaper and more accessible, allowing landlords and owners to power their buildings with green energy that reduces emissions and complies with local regulations.

Second, the bill offers tax incentives for all kinds of clean energy production, including eligible wind, solar, geothermal, biomass, hydropower, municipal waste and marine projects — many of which require land and specialized construction. Finally, the bill also provides incentives for carbon capture, tax credits for clean electricity, and individual incentives for electric cars, all of which could change the shape and nature of our cities and transportation systems.

The legislation was a long time coming. The Inflation Reduction Act is a scaled-back version of Biden’s hyped Build Back Better Plan that failed to win approval in 2021 and would have cost $4 trillion. The big change now is that Sen. Manchin, a crucial swing vote is on board. Passage is not a done deal, though. Besides winning Sinema’s vote, Democrats also need the Senate parliamentarian to green-light the reconciliation process, which will allow Democrats to pass the bill with a simple majority.