Asynchronous Work Poses Another Challenge to the Office Market

Companies such as Salesforce are staggering their employees' in-person time. 'Flexibility is fundamental to the future.' 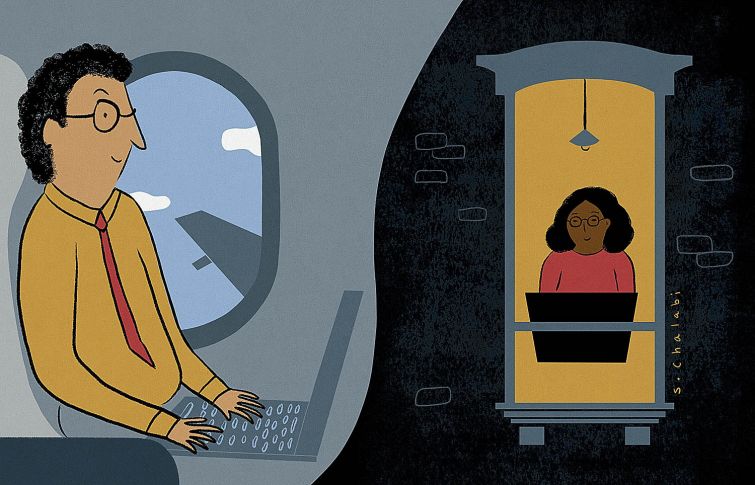 Is the next step beyond the hybrid office the asynchronous office?

A lot of bosses have made their peace with the idea that workers, the kind who make a company work and you don’t want to lose, are going to want to work remotely well beyond the pandemic. But a lot of thinkers are thinking why stop there? They are agitating for an even more empowered worker, one who gets to decide when, where and, most importantly, whether to commute to the office, making the traditional workplace even less populated than before.

“Asynchronous work gives people the freedom to move away from hyper-responsiveness and real-time communication towards a mode of work where they get to decide when and where to work,” said Steve Glaveski, CEO of Collective Campus and author of a December 2021 Harvard Business Review article entitled “Remote Work Should Be (Mostly) Asynchronous,” in an exchange of emails. “It is characterized by getting stuff done, without the constant chatter of meetings, Zoom calls and instant messages.”

To Glaveski and other advocates, too often the Zoom call, or whatever online facilitator is used to re-create the face-to-face meeting, is a time waster, an opportunity for immediate supervisors to assert their superiority, as opposed to something that actually adds value to tasks.

Instead, under asynchronous work, projects are supervised by “task boards,” which are documents that anyone on a work team can access through software such as Slack or Google that allows a team member to post what they are doing, see what other members on a team have done or are doing, and see what progress has been made toward their group goal.

There are other aspects of asynchronous work that distinguishes it from hybrid offices and, of course, traditional 9-to-5, commute-to-the-office work. These include limiting the time you have to spend on work and where you can declare without penalty that you are done for the day and not available. Morning people can get up at 4 and get more done by 7 than people who get up at a normal time can do all day. Night people can live like rock stars recording an album, and work until midnight or beyond. Asynchronous schedules usually account for time zone changes, too.

For those who think all this is too speculative and reeks of academics who have too much time on their hands, they are in for a rude awakening. Big-time global real estate service firms like JLL are already monitoring the trend, and Salesforce, a maker of customer-management software that’s San Francisco’s biggest employer, is experimenting with the asynchronous work model.

In a June report, JLL said it found that 60 percent of office workers wanted to work in a hybrid style and 55 percent were already doing so. Only about 48 percent of those surveyed saw their company as a great place to work, and one out of four told the firm they contemplated leaving over the next year. Kantor said she saw this as evidence that workers were restless, and looking for more comfort and balance between earning a living and having an enjoyable life.

At Salesforce, the company has had “asynchronous” weeks since last year, as it experiments with new work environments. It had more than 77,00 employees as of May, according to a spokeswoman, and 110 offices around the world, including six Salesforce Towers (there’s one by Bryant Park in New York as well as the headquarters tower in San Francisco) and three in development in Dublin, Sydney and Chicago. Its most recent asynchronous week was June 20 to June 24, an article on its website said.

One of the characteristics of such weeks is to go “meeting-free,” according to the Salesforce article. It offers some tips about “best practices” for going meeting-free: among them, plan, plan, plan (meaning that supervisors must set clear expectations for their workers); encourage teams to seek alternatives to meeting replication software like Google Meet or Slack; and create “enablement” materials for workers that are easy to find on the web.

The company also created a Frequently Asked Questions document for its workers, which among other things dealt with issues that might make them feel insecure about working asynchronously, such as “How do I avoid feeling isolated?” It said the answer to most such questions was to “rely on collaborative digital tools” by doing such seemingly frivolous things as greeting your team or sharing a personal playlist.

“Employees want the flexibility to decide how, when and where they work,” Steve Brashear, COO of Salesforce’s real estate and workplace services, said in an emailed statement. “But digital-first does not mean digital-only. Our employees’ No. 1 request is to get together in person with their teams, and our offices play a critical role [in that].”

From a commercial real estate point of view, the question hanging over all of this, and one for which there’s no one-size-fits-all answer, is how much, if at all, this makes traditional office-dominated skyscrapers obsolete, or less valuable. Office occupancy in major U.S. markets has already hovered between 40 and 45 percent for months, according to security firm Kastle Systems, which tracks employee ID swipes in places such as New York and San Francisco.

In a June interview with Commercial Observer, Owen Thomas, CEO of Boston Properties — the largest publicly traded office real estate investment trust and controller of some of America’s most iconic skyscrapers, like New York’s General Motors Building, Boston’s Hancock Tower and Prudential Center, and builder of Salesforce’s headquarters tower in San Francisco, the city’s tallest building — said companies would cling to downtown space that defines them, and there was no reason to abandon Boston Properties’ time-honored mantra of “A-properties in A-locations.”

And Elon Musk, boss of Tesla, which makes electric vehicles, and SpaceX, which makes rocket ships, caused a stir in June when he demanded that all his white-collar workers return to their offices at least 40 hours a week, or resign.

“Elon is the richest man in the world, so he must be doing something right,” Glaveski said in his email. “While I think that real-time communication and bringing people together has its benefits, mandating full-time face-to-face hours is not something I would do.”

As for Thomas’ take, Glaveski called it “wishful thinking from a commercial property landlord,” and a product of “optimism bias.”

Asked if asynchronous work is a trend that commercial real estate investors, especially those who have been drawn to offices, need to be concerned about, Kantor said the situation is “evolving.”

David Arena, director of global real estate for the international bank JPMorgan Chase, said that many of the bank’s clients are experimenting with remote workplaces, and that the post-COVID climate remains unsettled. About half of the bank’s own workforce, such as its tellers and its securities traders, have to be in the office to do their jobs properly. Then there’s another 10 percent who can do their jobs anywhere, leaving 40 percent who in the future might work in some combination of in the office and outside the office.

“There is a material role for physical real estate and physical offices in the future,” Kantor said. “It’s about matching the work environment with the work that needs to be done.

“When you are an office worker, and your role is work that can be performed in a variety of physical locations, then it’s best to be performed where that individual can deliver the highest-quality work product for them,” she said. “That’s the best outcome for the employee and for the company.”