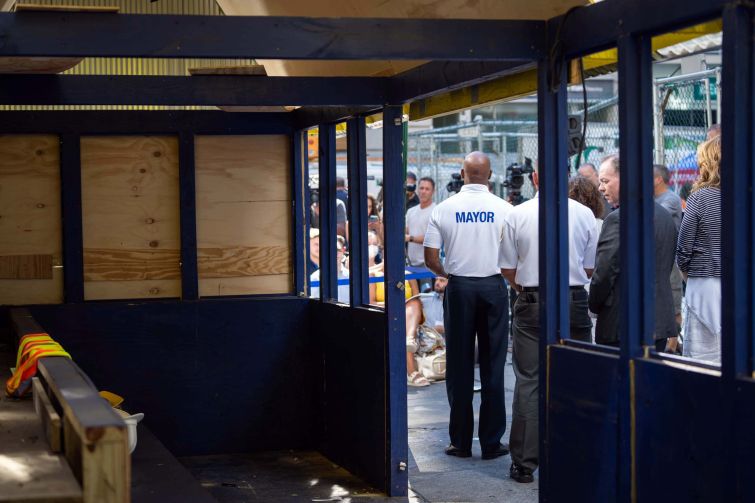 Mayor Eric Adams announced that ramshackle and abandoned dining sheds will be hauled away such as this one on West 32nd Street and Fifth Avenue in Manhattan on Aug. 18, 2022. Photo: Ed Reed/Mayoral Photography Office

Outdoor dining sheds from shuttered restaurants left abandoned on the streets of New York City are finally being hauled away by the city.

Mayor Eric Adams announced a blitz removal of 24 sheds outside now closed restaurants on Thursday morning after clearing a plate of his own in an open restaurant alongside former Staten Island borough president, and noted anti-litter crusader, James Oddo the night before.

“Outdoor dining has transformed New York City and saved 100,000 jobs during the pandemic, but we cannot allow abandoned dining sheds to litter our streets,” Adams said in a statement. “These deserted dining sheds have become eyesores for neighbors and havens for rats, and we are going to tear them down.”

The city will finish demolishing the initial 24 sheds in the next few days and plans to continue to tear down other vacant sheds if a shuttered restaurant doesn’t do it itself.

During the height of the pandemic, the city launched the Open Restaurant program to throw a lifeline to struggling bars and eateries to let diners eat outside while COVID-19 kept them from being inside. It wasn’t enough to stave off financial ruin for some who left the derelict sheds in their wake, though Adams stressed they only represented a fraction of the nearly 13,000 outdoor dining sheds as part of the program.

“With this initiative, we are also taking the essential step towards a permanent Open Restaurants program that all New Yorkers can be proud of every day,” Adams added.

While few dispute that Open Restaurant, enacted in the last year of former Mayor Bill de Blasio’s tenure, saved businesses and jobs even some of the most stalwart champions of the program welcomed the cleanup effort.

“It’s great news that Mayor Adams announced the City will remove abandoned outdoor dining structures that shuttered during the pandemic and will focus on revitalizing or removing dilapidated ones as we transition out of the temporary emergency program that saved countless small businesses and jobs,” Andrew Rigie, executive director of the trade group the NYC Hospitality Alliance, said in a statement.

But that does not mean everyone is on board with the program becoming permanent long after all other COVID-19 era emergency orders have been lifted.

Despite the program becoming codified into law by New York City Council in February through zoning text amendment, the Coalition United for Equitable Urban Policy, an alliance of community groups, is continuing to sue the city, charging that Adams is guilty of executive overreach by making outdoor dining program, according to The New York Times.

Other critics of the program filed a lawsuit to stop it because the outdoor dining sheds have been provided fodder by increased official rat sightings above 2019 and 2020 levels, the New York Daily News reported.