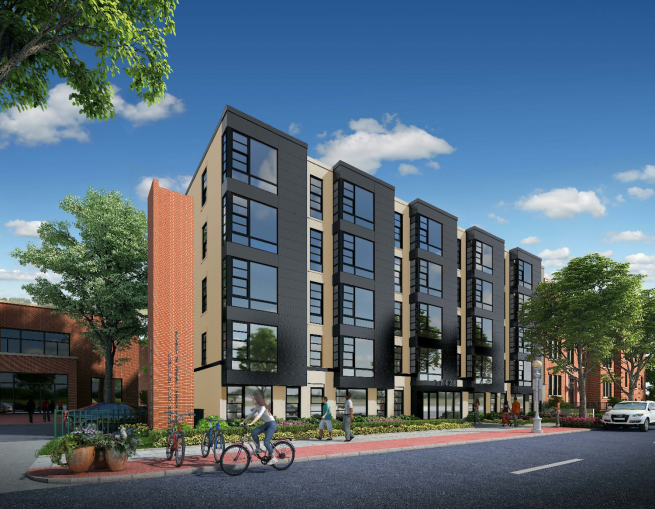 A new affordable housing development in Washington, D.C.’s Shepherd Park neighborhood is ready to get off the ground, after closing on financing from various public programs.

The residents of the 7428-7434 Georgia Avenue Tenants Association exercised their rights under the Tenant Opportunity to Purchase Act to obtain the existing three-building complex last year.

Lock 7 Development is heading the $33.7 million redevelopment, which will include demolishing the two-story apartment buildings currently on the site and constructing a new building. All current tenants have been relocated as part of the agreement with the developer.

When completed, Shepherd Park Apartments will include 66 apartments, all affordable.

Additional financing for the property, at 7428 Georgia Avenue NW, will be provided in the form of an $11.7 million loan from the D.C. Department of Housing and Community Development’s Housing Production Trust Fund.

“The appeal of the development will be the opportunity to live in newly constructed, modern apartments, owned by tenants in a complex, at rental rates based on the residents’ incomes, located in an amenity-rich neighborhood,” Christopher E. Donald, executive director and CEO of the DCHFA, told Commercial Observer.

The new Shepherd Park Apartments will consist of 10 efficiencies, 34 one-bedroom, two two-bedroom and 20 three-bedroom apartments reserved for residents earning from 30 to 60 percent of area median income. Thirteen of the units will be designated as “permanent supportive housing,” designed to help the chronically homeless.

“This investment at Shepherd Park Apartments is next to [the Walter Reed redevelopment] with a new grocery, hospital/innovation center,” Donald said. “The real estate risk is de minimis in light of this, and significantly reduces the chances of failure.”

Amenities at the building will include a green roof, bike storage and fitness rooms. The development will also include office space for the on-site permanent supportive housing service provider, Community Connections.

The Shepherd Park neighborhood of Ward 4 is primarily made up of single-family homes and is a highly desirable neighborhood for home buyers, which has caused the price of housing to increase in the area, according to DCHFA.

“Its neighbor is the redeveloping Walter Reed campus, which is bringing a large number of market-rate housing to the area,” Donald said. “Shepherd Park Apartments will ensure that the existing residents will be able to afford to remain in this neighborhood and future residents at moderate and low income levels will have the option of living in Shepherd Park as well.”