As recently as seven years ago, the region's economy and real estate market were largely about gambling 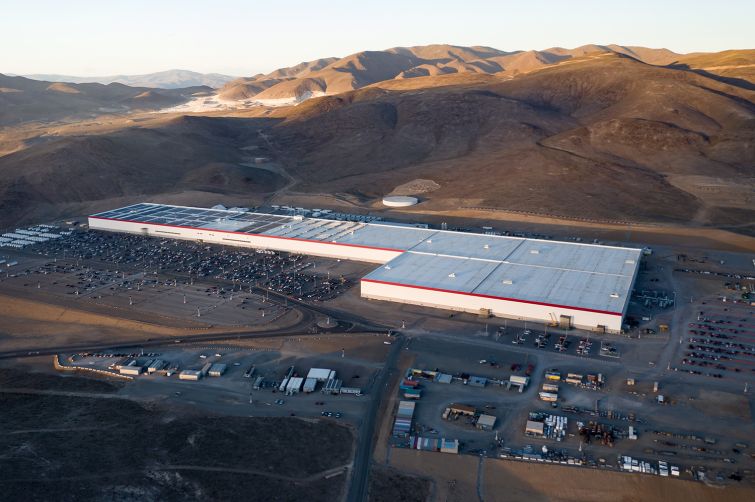 Tesla's gigafactory in Sparks, Nev., underscores the growth of tech and tech-related industries in the Reno area. Courtesy of Tesla Inc.

If you were describing places that animated the Reno area a couple of decades ago, you’d likely be talking up the casinos and gambling parlors that made this Nevada metro a tourist hot spot and gaming mecca.

Today, years after a crash in the gaming industry, the buildings you’d be talking about instead would be the rather more staid advanced manufacturing hubs, tech centers, logistics facilities and huge plants, like the Tesla Gigafactory, a 10 million-square-foot nexus of battery making that opened in 2016 in the aptly named neighboring suburb of Sparks.

Reno’s recent trajectory has seen the city and its surroundings blossom into a nascent tech center and logistics hub, a shift that has attracted firms such as Apple, Switch and Google, spurring a boom in multifamily construction and downtown conversions — as well as accelerating a housing affordability crisis. It’s summed up by one of downtown’s biggest redevelopments, the conversion of William Harrah’s famed bingo parlor and gaming center to Reno City Center, a project with 530 apartments and 150,00 square feet of office space opening this fall.

Reno’s revival over the last decade began when the gambling hub, dealt a bad hand, doubled down on tech, with the Economic Development Authority of Western Nevada (EDAWN) aggressively marketing Reno and recruiting a mix of tech and manufacturing firms to diversify the economy.

In 2000, roughly 20 percent of the region’s economy was tied to gaming. When the local industry was hit hard by the recession and increased competition from tribal-owned casinos in Northern California, Reno suffered. Dependence on tourism hobbled the post-recession rebound, and downtown became especially bleak. A 2015 Fast Company article called the city “officially the most depressing place on Earth,” while Mike Kazmierski, president and CEO of EDAWN, called downtown “an eyesore.”

The recent rebound underscores just how different the circumstances are for the city and region today. The diversified economy, which now includes big names like Tesla, barely missed a beat during the pandemic, said Brian Gordon, principal of Applied Analysis, a Las Vegas–based economic consultancy.

The number of jobs in the city now tops pre-pandemic levels, and unemployment in fellow Nevada hub Las Vegas was double that of Reno during the early stages of the pandemic in 2020. Tom Fennell, principal at Dickson Commercial Group, said there’s great growth potential in industrial and multifamily, and scores of new projects have helped knit together neighborhoods like the University District (site of a future life sciences building and University of Nevada-Reno expansion) and Midtown.

There hasn’t been a wave of companies opening huge downtown headquarters, and the full-time population in Reno’s city center is just under 5,000, but there’s momentum and plenty of space to attract new firms, as well as underdeveloped waterfront property along the Truckee River, which bisects the city. Efforts to redevelop downtown, including a controversial and unsuccessful effort launched in 2017 to push out strip clubs, has led to a raft of new developments.

With that potential in mind, the development map of the “Biggest Little City in the World” is dotted with projects. Among them are the recently approved Neon Line District, a $1 billion, 20-block reshaping of downtown funded by Jacobs Entertainment; a new 270-room Kimpton Hotel; and Lyon Living’s Reno Entertainment District in Midtown. Warehouses and industrial sites ring the region, including the 1.35 million-square-foot Park at McCarran, a joint logistics project between Locus Development and Dermody Properties. There’s also Panasonic Energy of North America, a Panasonic subsidiary that will soon occupy 95,000 square feet of renovated office space in the old Nevada Bell Building.

Reno’s market could weather a recession relatively well, too, because it’s been attracting businesses from higher-cost markets like California, Gordon said. Advanced manufacturing, warehousing and retail have been robust, and demand for housing and commercial space has been strong, he added. His firm is currently tracking $20.4 billion worth of development projects in the pipeline in Northern Nevada.

More than 100 advanced manufacturing firms have set up shop in Reno in recent years, said Kazmierski, including many clean energy and materials recycling startups. He pitches California firms on a lower-tax, lower-regulation home where he says companies can cut their costs by up to 40 percent.

“We’ve always been attractive and a great place for manufacturing, we’ve just been under the radar,” Kazmierski said. “The investments [in marketing and attracting new companies] made a decade ago continue to pay dividends.”

That’s been reflected in a boom in residential and multifamily projects, especially new student housing projects and mid-rise multifamily projects with 30 to 60 units spread around the city. Angela Fuss, the city’s assistant development services director, said there have been a lot of new building permits, especially for new infill projects; total permits issued jumped from 10,396 in 2019 to 13,416 last year. Ballpark Apartments, a 369-unit project next to the home field of the minor league Reno Aces, sits next to a five-acre parcel Dickson sold to a developer seeking to build a 375-unit apartment complex called Riverfront.

Dermody Properties, which developed the Park at McCarran and just broke ground on another 1.1 million-square-foot industrial project, views Reno — near both the California border and I-80, a key shipping route — as a key logistics and distribution hub, as well as a more cost-effective manufacturing center. Dermody partner John Ramous said demand for industrial space spiked during the pandemic, driven by e-commerce, and demand continues to outpace supply. Of the roughly 100 million square feet of industrial space in the Reno/Sparks region, just 500,000, or half of 1 percent, is vacant, and 75 percent of the 8 million square feet under construction is already pre-leased.

“It’s a very tight market, so you can tell there’s a lot of runway,” said Ramous.

But the market’s maturity — and Reno’s popularity — also spells challenges. Housing affordability continues to be a significant problem. A city effort to build 1,000 homes in 120 days was delayed by COVID, and a pandemic-era migration of remote workers exacerbated an existing shortage, with median rents rising 36 percent between 2019 and 2022 to $1,624 per month. Fuss said there’s a growth in rental options and lots of new industrial and manufacturing jobs, but wages aren’t keeping pace with rents.

And, while it’s assumed that the surrounding high desert is nothing but empty space poised for expansion, topographical issues, government ownership and infrastructure limits mean the region is somewhat hemmed in — and now land-constrained due to years of growth. Dermody’s Ramous said few infill locations of scale remain after the flurry of projects and permits, and land costs have spiked. The sale price per square foot of industrial property went from just over $40 in 2013 to nearly $200 today.

But a recession might reveal just how much of an advantage Reno has built for itself by stepping away from gaming and tourism, and creating a potential landing pad for other kinds of companies.