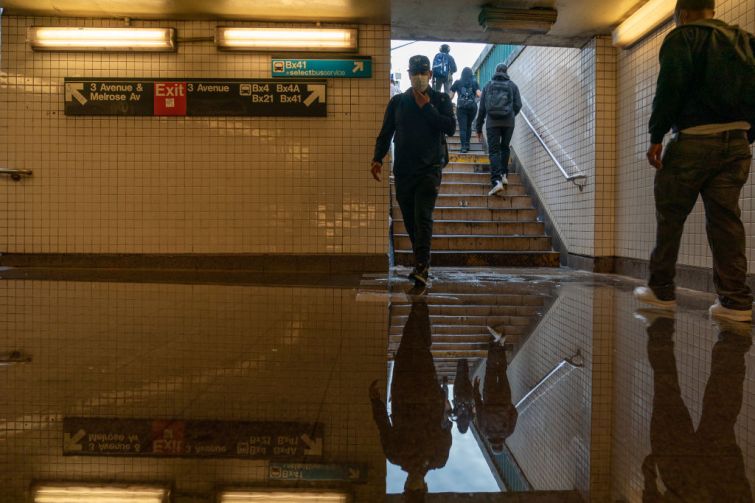 Commuters walk into a flooded subway station in the Bronx in September 2021, when Hurricane Ida dumped three inches of rain on New York City in an hour. Getty Images

More than a decade after Superstorm Sandy wreaked havoc on the city’s subways, the Metropolitan Transportation Authority is still under-equipped to protect the system from flooding, according to a new report from MTA watchdog the Office of Inspector General.

“Almost ten years after Hurricane Sandy, MTA has made great progress in fortifying its assets, however many opportunities remain for the MTA to improve upon its hurricane preparedness plans,” acting MTA inspector general, Elizabeth Keating, said in a statement. “Riders and NYC residents are relying on the MTA to deploy millions of dollars’ worth of flood control devices correctly and efficiently when the time comes, and a hurricane is forecast.”

Hurricane Sandy swept through the city in 2012, causing $5 billion in damage to the subway system and the MTA commuter railroads. In response, the Federal Transit Administration gave the MTA $5.8 billion for repairs and resiliency projects.

The OIG recommended that the MTA establish clearer standards for using the inflatable flood barriers and better communication protocols between crews tasked with installing and maintaining them. It also argued for better training for these employees, a stash of extra parts and mock deployment exercises, so that the agency is aware of how well the devices work.

Crews were not well-trained in deploying the devices during a training exercise last year, which meant that it took longer than it was supposed to to install the flood barriers, according to OIG.

“In addition to taking these steps, NYC Transit should authorize a central group to oversee certain critical tasks — including employee training, maintenance procedures, mock deployment, and spare parts management — to increase efficiency and improve consistency among the user departments,” the watchdog wrote in the report. “OIG believes that the centralization of authority and responsibility will improve NYC Transit’s overall hurricane preparedness.”

The MTA accepted most of the report’s recommendations, but it rejected the idea of centralizing flood deployment responsibilities into a single office, according to OIG. The report noted that, “the recommendation to centralize responsibility for the plan under one entity was rejected in favor of [MTA] Subways and Buses maintaining autonomy over their own plans with quarterly coordination meetings.”

For its part, the MTA defended its multibillion dollar flood protection plan.

“This report highlights the substantive steps NYC Transit has already taken in partnership with MTA Construction & Development to address a complex, yet vital task,” said MTA spokesperson Michael Cortez in a statement. “NYC Transit is uncompromisingly committed to resiliency, investing $5.8 billion to harden the transit system against coastal flooding.”