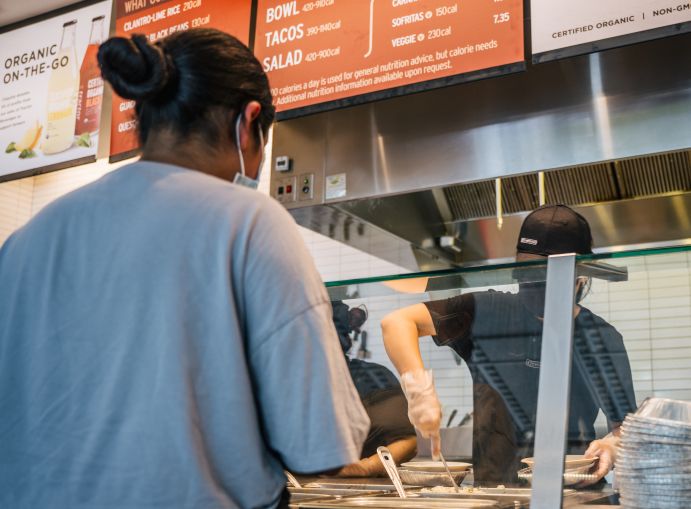 A woman waits in line for food at a Chipotle Mexican Grill. Photo: Brandon Bell/Getty Images

Retailers who want to think big in 2022 should consider focusing on smaller markets than they typically looked to in the past.

The sudden option to work from home has led to questions about where employees would live if commuting to an office was no longer a necessity. Analytics firm Placer.ai released a report this week breaking down how the pandemic may not have been nearly as big of a catalyst for movement as anticipated, and how understanding these patterns can make the difference for new and existing retailers and commercial landlords.

Placer.ai data compiles stats such as household income, demographics and age groups that come and go in different trade areas, providing a critical lens for retailers and restaurant operators to uncover opportunities to reach key markets at the earliest possible stage.

The firm found that while some cities did see people move away, many stayed close by in nearby towns, suburbs or neighboring enclaves. For example, 10.3 percent of those leaving Brooklyn last year moved to Queens, and 8.7 percent moved to Manhattan. Others leaving Brooklyn relocated to Upstate New York, New Jersey or Connecticut.

R.J. Hottovy, head of analytical research at Placer.ai, said there’s been a pretty big move from urban markets to suburban and even rural markets. He said almost half of the top 25 markets in terms of net growth over the last two years are smaller markets of fewer than 500,000 people.

“One of the themes we started looking at is that smaller markets, and markets that retailers would look at as off-limits, are maybe more viable right now,” he said. “We’re starting to see a lot of retailers like Chipotle or Kohls or PetCo start to look at the smaller markets. Markets with under 200,000 people, under 100,000, some as few as 50,000 people might be viable markets now. Some of that is migration. Some of that is new formats that adapt and grow.”

As an example, Hottovy pointed to markets in places like Boise, Idaho, and other college and university towns like Athens, Ga., or Gainesville, Fla., that have become viable targets.

Additionally, the report pointed out recent migration trends that had been taking place before the pandemic. Overall, areas that were already attracting new residents kept growing the past two years, and those that were already losing residents lost more.