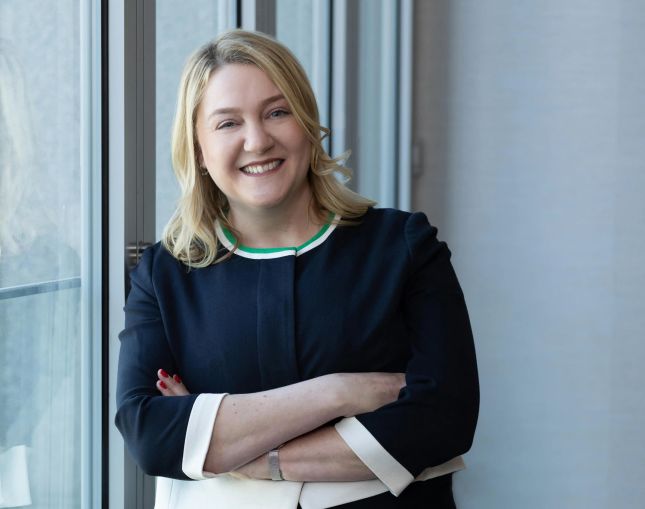 Gemma Burgess, who has placed a number of women and minorities in key commercial real estate roles, assumed an expanded role as CEO of Ferguson Partners on June 1 after nearly 15 years at the talent management firm. She replaced Bill Ferguson, who co-founded the company with Michael Herzberg in 1989 and will stay involved as chairman.

Burgess, who was previously president of Ferguson since March 2021, joined the firm at its London office in 2007 before moving across the pond to run its U.S. search business. Since then, she has led efforts to help diversity in the CRE industry and created Ferguson’s inaugural diversity partnership in 2020 with the Real Estate Executive Council (REEC).

A native of England, Burgess splits time between New York City and Ferguson’s Chicago headquarters. She spoke with Commercial Observer about the significance of being Ferguson’s first female CEO, progress in placing women into CRE executive positions and the industry’s challenges with diversity.

Commercial Observer: How has the transition been since you were promoted to CEO after two and a half years as president of Ferguson’s U.S. search operations?

Gemma Burgess: I officially took over as CEO on the first of June so I’m very early in this true global leadership role, but there was a lot of hard work in the two years up to this point because being an entrepreneurial founder-led firm we didn’t have many of the governance or systems or processes in place for anyone to be able to come in and take over running the business. So I spent the last couple of years with my executive committee doing all of the obvious things like putting together the governance model, working closely with the board, working out what the governance structure looks like for the executive committee and for each of the different business unit leaders, and then putting together formal business plans, budgets and hiring plans.

A lot of hard work has been done, and I’m hoping now that we’ve rolled past the first of June that the fun stuff can start to happen.

What is the significance of being the first female CEO at Ferguson given your role in placing many women in key commercial real estate roles over the years?

It has been really moving. I’ve had so many clients, candidates, friends in the industry and even competitors reach out and say it’s so awesome to see a woman in this role. I think for me, it’s been a huge part of my career helping an industry that’s been historically very male and white dominated to put women into leadership roles. So it feels like a payoff after all of those years of hard work to take this position today.

We had a great couple of weeks where we had one-on-one Zoom meetings with our new analysts that are joining us over the summer in our new analyst program, and to be able to say to these 22-year-old women or people of color that “I joined the firm 15 years ago as an associate and have been able to work my way up to run this amazing company, and hopefully one day I hand over the baton to one of you” was a very inspiring way to spend a few hours. You can see the ambition that’s out there, the passion for the industry for both professional services and also for real assets and a real push to continue to do all that we can to make this a more inclusive industry.

How would you describe challenges with placing women in top CRE positions today compared to when you entered the profession 15 years ago?

I would say there’s still a lot of challenges at the senior leadership ranks. I think there’s now a lot of firms that are doing a lot of good work with regards to bringing women and people of color into the junior ranks, but obviously we’ve got the history still to deal with that you don’t necessarily have the people that have come up through the ranks that you can place into those senior roles.

The challenges are still there, and I think we still suffer from losing a lot of women at the midpoint of their career [due to exiting the industry to start families]. But I do think that we are slowly really starting to make a difference, and you can see a huge impact at the board level. I think you can look across the public companies and a lot of the private firms have a much more diverse board members, which again shows that a lot of change comes from the top, and that’s a really positive achievement for the industry.

What’s really interesting is, as a woman, it was always very easy for me to reach out to other senior women and get help and counsel and advice with regard to placing other senior women. But as a white person, I honestly was unsure how we even start to truly have the conversation with regard to minorities and people of color. Through our partnership with REEC we were set up with a very good friend, Tammy Jones, who’s the chairperson of the REEC organization today, to really start to get our heads around how to tackle it. And honestly the best advice that I was given is that we should be having this conversation, that it is the right conversation to be having, and everyone has to put on their big girl pants and start making those calls and asking people for help and counsel when you need to diversify your long list and your short list within within the search process. So we leverage our REEC partnership a lot.

We are now at the two-year anniversary of the George Floyd murder. Was that a big inflection point for boosting diversity in commercial real estate? Or is there a concern that perhaps this will get lost with the passage of time?

I have been talking to a lot of folks about this topic over the last few months and I think there’s a real push for this to really be a movement and not just a moment. The good word that REEC has done with regard to outreach into the industry, the groundwork for that was all made way before the George Floyd incident — but at the same time I think it’s in some respects it was good timing for their their good work and their good outreach to give support to the industry that’s trying to get its head and arms around what’s happening out there. There was work already underway and there’s obviously a lot more work for us to do as an industry, and obviously as a country.

You relocated to the U.S. from London eight years ago. How would you describe the flow of U.S. commercial real estate capital compared with Europe?

I was lucky enough to be able to work in Europe pretty exclusively with U.S-based and North America-based funds so I was very well aware of the craziness that I was getting myself involved with. The pace and the size of the industries are very, very different in the U.S versus Europe. And when you layer in from the private equity and investment management platforms that I used to work with to really have to get to know all of commercial real estate across, developments, construction, advisory businesses, owner-operators, private families, etcetera, the industry is just absolutely huge in comparison.

Lastly, I know you just started in this new expanded role, but what are some of your either near-term or long-term goals?

There’s a long list. We want to continue to capture the client-centric approach that Bill and Michael had founded the business on as well as the client-centric approach to everything that we do. I think how I and the executive team want to evolve the business is to also put the same emphasis on our employees as we do on our clients, just to ensure that we do continue to work on things like training and development, work-life balance, wellness, retention, all of the human capital topics that really sit in the boardroom of every company across the U.S. today, regardless of the industry that you serve. That’s important for me, as well as continuing the good work with regard to the DEI initiatives both internally and externally across the industry.

We’ve just set up our first analyst program that is taking talent straight from their undergrad institution and bringing them into the organization to give us more of a pipeline of diverse talent, both from a ethnicity point of view, but also from gender and from different socio-economic backgrounds as well, which is a very important thing and very close to my own heart. That’s important for us as a firm, and I think the industry needs to continue to bring a robust flow of folks into the commercial real estate industry and to think about things differently as to how we have done them in the past and not just to recruit from the Ivy League colleges and people that already knew about real estate from their families, etcetera, and to make sure that we can start to grow again the pipeline of talent coming into the industry.