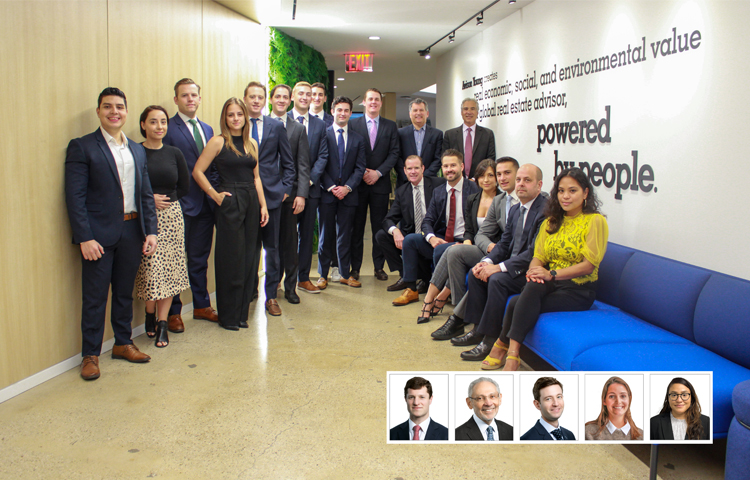 Commercial real estate brokerage has long rewarded the more competitive among us — those who do whatever it takes to close deals while protecting any related information like it was the nuclear codes.

But is this long-established method of doing business truly the best way? James Nelson, principal and head of the Tri-State Investment Sales Group at the global real estate firm Avison Young, has reason to believe otherwise. When he arrived at Avison Young five years ago, Nelson restructured the investment sales team to make it fully collaborative, including daily meetings where all deal intelligence is freely shared, and a commission structure that rewards every team member on every deal.

“Working as a group is the best way to provide service for our clients,” said Nelson, who previously led similar teams at Cushman & Wakefield and Massey Knakal, and who has led his Avison Young team to over $1 billion in sales since he joined the company in 2017. “We built one unified sales team who cover all of New York City, as opposed to having 50 brokers who each have their own book of business and are in competition with each other. Building a team to service the business has always been a big part of my own personal success.”

Key aspects of the theory behind this are to remove internal competition that, Nelson believes, ultimately hinders team efforts more than it inspires strong performance, to promote the sharing of valuable market information, and to encourage and support younger brokers.

“The traditional model is a steep pyramid where seniors will grind junior brokers without much training and only a few survive,” said Erik Edeen, principal and director of operations for Tri-State Investment Sales at Avison Young. “Couple that with the fact that few graduates coming out of college can even afford that model, which takes two years to start making any money. Our model is built to attract talent for the future inclusive of all, not just the select, privileged few who can take a flyer on a career.”

Nelson’s team meets every morning to share information about deals in the works and potential new ones. Working as a team, no information is siloed. Everything is shared, on the theory that any information that leads to a sale will benefit every team member.

“Most brokers have their own books of business and work their own assignments, which means that the other people at the company are probably not aware of what they’re working on,” said Nelson. “We’ve got an entire group that’s aware of everything we have going on. We meet on it every morning, and we trade ideas and information back and forth. Our teams are broken down by asset class, so we have a retail team, a multifamily team and so on. This allows us to find buyers who might not traditionally look at a type of asset. We have a broader reach when we’re marketing properties.”

The proof of concept here is in the results.

“The number of transactions we’re doing with essentially two dozen people, if you looked at the sale-per-person in our group, I would guess it’s much higher than at some of these larger firms that might have 100 or 200 people,” said Nelson. “We have a very efficient group. If we can do 40 or 50 sales a year with two dozen people, that’s a very strong result.”

As such, Avison Young’s clients continually reap the benefits of having an entire team at their disposal.

“Our relationship with James and his teams have led to north of $100 million in dispositions,” said Joe Sabbagh, principal, Ultimate Realty, just after Avison Young executed a deal for Ultimate for the sale of 141 East 55th Street. “Ultimate was very impressed by Avison Young’s ability to identify a purchaser and assure certainty of closing required to meet our aggressive time constraints.”

“The Tri-State Investment Sales Team at Avison Young understood the complexity of this sale and was able to best advise our client to maximize proceeds,” said Treacy Gaffney, who worked with Avison Young on the sale of 75 Warren Street. “Where two previous brokers were unsuccessful, Avison Young identified an ultra-high-net-worth buyer who was able to purchase the shares of the corporation, which was much more advantageous than an outright sale for the fee.”

For brokers, the financial rewards on every deal incentivize the entire team to view every sale as a win, bringing about greater team contributions throughout.

“The portion of each commission that gets split into the pool mimics the draw loan that you might find in a traditional system,” said Edeen. “But as our young people start adding value on transactions, they get execution bonuses on top of that amount rather than being required to pay it back to the house. This helps ease financial anxiety, and gives the near-term pops in income people are attracted to brokerage for in the first place.”

Nelson believes that this way of working not only burnishes sales, but creates greater employee retention.

“The fact that when people come in, they’re plugged in to the system immediately makes onboarding a lot easier, but it also makes retention greater,” said Nelson. “When you join our team, it’s not just, ‘Here’s a desk and a phone,’ and you’re competing with other people at the company. Here, you’re actually welcomed in, and you have immediate access to deal flow, which is very powerful.”

As Avison Young continues to build on its success, Edeen believes this way of working will continue to grow not just within Avison Young, but throughout commercial real estate as a whole.

“We believe the future is in effective teamwork — the collective brain,” said Edeen. “As the commercial real estate industry moves towards a more efficient market and there is a consolidation of players, the fast-talking solo broker will be phased out. A considered, consultive approach is the future.”