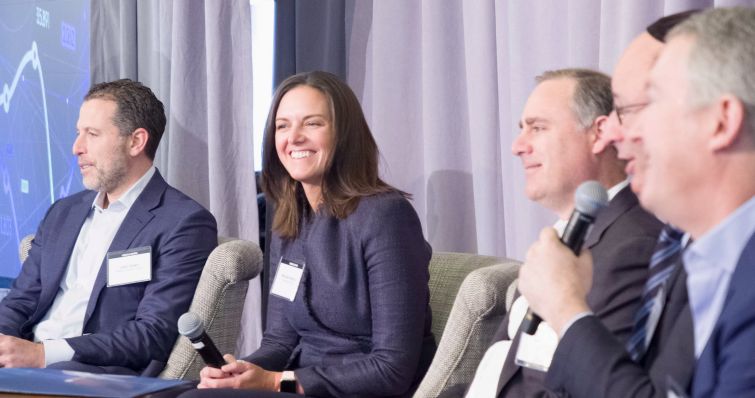 One year after optimism beckoned the commercial real estate capital markets after surviving the worst of the COVID-19 pandemic, lenders and brokers are confronting new challenges for 2022 in a volatile economic climate.

“We’re midstream in the process of people digesting what’s going on,” Timothy Johnson, global head of Blackstone Real Estate Debt Strategies (BREDS), said in a fireside chat to kick off the forum, moderated by CO’s finance editor, Cathy Cunningham. “Real estate should be a good asset class to be invested in, in an inflationary environment, but you need to be careful about which things you choose.”

Johnson noted that tackling deals with “short duration” leases where borrowers can set rents at market rates is a prudent strategy in the current volatile environment that has become common practice among many Blackstone investors. He said that while there is a bit of a “pause in the debt market” now as lenders digest what the future holds for interest rates, transaction volume should soon pick up again once there is more clarity.

Last year marked the most active one yet for BREDS, which closed $22.7 billion in transactions compared with $10 billion in 2020. Since its founding, the platform has made more than $100 billion of loans from nearly 500 borrowers.

In addition to its deep client pool, Blackstone is also well positioned for whatever path the markets head thanks to adding a new Structured Finance Group last November on the heels of also tripling insurance capital to $150 million aided by a new partnership with AIG. Jonathan Pollack, global head of Blackstone Structured Finance, said the goal of the platform is to further enhance Blackstone’s CRE lending capabilities across a variety of asset-backed finance markets such as consumer finance and transportation.

“The idea is to consolidate all these things together and consolidate them with this amazing machine we have built with BREDs and use some of the best practices that we’ve learned to take advantage of those markets,” Pollack said.

New external market headwinds have caused lenders to slow their deal pace roll of late, but lenders are still forecasting a heavy volume year — even if not quite at the same level as 2021.

“This year brings a different dynamic on the macro side and the geopolitical side, so we’ve slowed our pacing down a little bit and are trying to preserve capital people,” Matt Salem, partner and head of real estate credit at KKR, said during the first panel, “Where Uncertainty Ends & Deals Pick Up — Tapping Into Top Strategies.”

“But all in all I would say that we’re still on track in terms of our budgets to meet those budgets. We’re just probably coming at it a little bit slower than we did last year,” Salem said.

Rising interest rates could, however, offer some benefits for CRE finance, since it could raise the value of existing hard assets, according to Dennis Schuh, chief originations officer at Starwood Property Trust. Schuh noted there are opportunities in a period of uncertainty for firms with sufficient access to capital and liquidity who find better returns on investment amid risk repricing,

Zegen said many mortgage real estate investment trusts (REITs) and debt funds that are highly levered with warehouse lines have pulled back due to market uncertainties with collateralized loan obligation (CLO) issuance, and banks tightening up their balance sheets. He added that with higher construction costs weighing on budgets, senior lenders are not as willing as they were last year to restructure loans, which has resulted in more recapitalization opportunities when borrowers need more proceeds.

Herrick stressed the importance of communication in the current market conditions with reminders about how long terms for a transaction will exist.

“Deals are taking a long time to close, in particular [within] our construction lending book, because people are getting surprising results as they go to price and finalize their contracts,” Herrick said. “We can’t predict what happens next, and we certainly don’t want to surprise anyone or have them feel like we’re trying to grab something, but we are moving along with the market, and our costs have changed with that.”

Herzka noted that while some lenders are slowing down deals of late, others he has communicated with are looking to ramp up after not issuing during the last 18 months when capital costs were cheap. He said an uncertain market provides opportunity for an intermediary like Meridian that has longstanding relationships with a variety of different debt vehicles.

With lending markets harder to access recently, some brokerage firms have turned to other avenues for raising cash for borrowers.

Stolly added that. for the multifamily market, surging rents in big cities like New York and Miami make deals attractive for lenders.

Brad Ross, managing director and head of originations at Parkview Financial, said multifamily is also showing momentum in Silicon Valley two years after the San Francisco market encountered headwinds at the height of the pandemic, when a number of tech workers fled the area to work remotely.

“They’re coming back to the office three days a week, staggered, sometimes full, and we’re seeing construction projects rebound, projects restarted, and rents are recovering very quickly,” Ross said. “We just had a deal where we said we can underwrite the pre-COVID rents, the bottom of COVID rents, where we think it’s going and where it is today, and we underwrote where we thought it was today and we just got an appraisal back for what it’s worth, and it was better than Pre-COVID.”

Flake-Brown noted that Brookfield has recently shifted its portfolio more toward higher growth markets from its past practices of mainly targeting major cities with large institutional assets that reflected its origins in office deals. Brookfield’s loan portfolio pre-pandemic was composed of around 60 percent of office debt, but now makes up less than 50 percent as the firm focuses more on industrial and multifamily deals.

Fung said that even as the Federal Reserve is poised for multiple rate hikes, there still should be plenty of available near-term capital for CRE since a number of investors have sought out the space in the hunt for yield while rates were at all-time lows the past few years.

“I’m definitely an optimist,” Fung said. “I think there will be at least for a short medium term a lot of liquidity that remains in commercial real estate as an investment strategy, but it is a little bit of a question mark at least in my mind of where we go If rates increase quite a bit.”

The keynote presentation was given by Thomas LaSalvia, a senior economist from Moody’s Analytics CRE. Despite the freshly released figure showing a 1.4 percent GDP decline, LaSalvia said it doesn’t dramatically change the takeaway message from his presentation — specifically his bullish take on CRE.

“A lot of that decline can be attributed to a balancing out of the incredible rate of growth that we had at the last quarter of 2021, which was largely attributed to inventory gains on the private side,” he noted.

“We still have a very strong labor market, near full employment, but there still is room to grow,” LaSalvia added. “There’s still about a million or so jobs that haven’t been reclaimed since 2019. And so if we can boost up labor force participation a little bit, that will help the economy.” As a strong believer in the value of the office sector, LaSalvia said that any type of labor issue that the market sees is from the supply side and not the demand side at this point.

“The crisis in Ukraine and instability in the energy sector has worked its way into the overall economy and overall prices,” LaSalvia said. “The instability that this [crisis in Ukraine] brought to the energy markets in causing prices to rise has disallowed what was going to be a more organic decline in inflation.”

At the end of his speech, LaSalvia showed the audience a chart of e-commerce’s share of retail sales. “It’s almost like the pandemic did not change anything related to e-commerce,” he said. “We thought people would start buying everything online and not go back to brick and mortar after reopening. Well, it turns out that’s not the case.” With limited supply growth over the past few years, the economist predicted a steady retail market. In conclusion, “We are all right as an industry,” he said.

The discussion centered around strategies for deployment of capital in an ultra-competitive market. “I actually think the market is less competitive today than it was last year,” said Rose. “Last year, tailwinds were at all of our backs. If you didn’t have a record year as a lender, you were probably doing something wrong last year.” For Silverstein, as a lender, the most important thing is the relationship with the client, while Fineman noted that borrowers and brokers are paying attention to the certainty of execution.

Location, location, location is a common mantra in real estate, and when asked if it applies to the retail environment, Fineman described it as crucial. As Rose put it: “It’s hyper-local. And retail, more than anything, is all about the location.”

When it comes to popular asset types grabbing lenders attention today, the belles of the asset class ball are keeping their crowns in 2022. “It’s multifamily in markets where you have population job growth and low taxes,” said Niederpruem. “It’s also industrial, even though we’ve seen some softening signs.”

“So I’ve been working on it [C-PACE] since 2008,” said Bailey, “and I used to have a joke that people were attending more conferences than their workplace deals done nationally. That is no longer the case,” she added.

“ESG is very important. We found a lot of our European investors are interested in owning and operating green buildings,” noted Winefsky. “If you’re focusing on ESG, it will result in a better economic product overall.”

“[ESG] is already here,” said Erxleben, “It’s already in the underwriting. So I think it’s going to be even more or a focus going forward.”