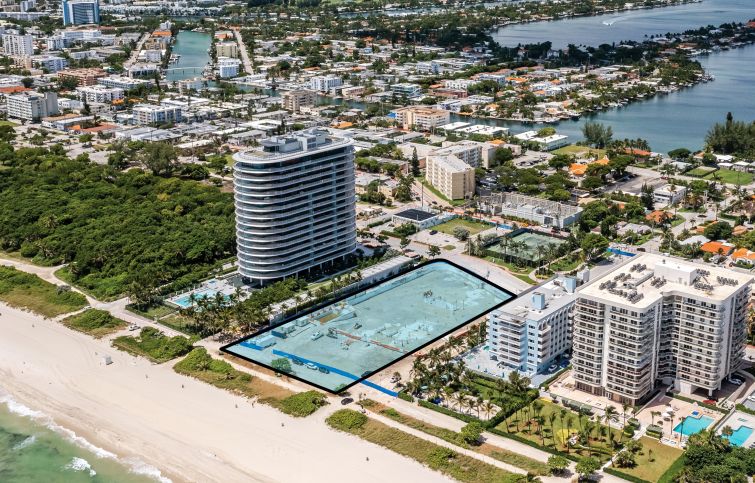 The site of the condominium that collapsed last June in Surfside, Fla., will be sold May 24 in a live auction, with a starting bid of $120 million, the brokers announced.

The 1.9-acre oceanfront property, formerly the Champlain Towers South, is located at 8777 Collins Avenue, with frontage along the Surfside boardwalk.

Dubai-based Damac Properties is the stalking horse bidder and is “extremely motivated,” according to Avison Young’s Michael Fay, who is marketing the property. Damac put in its initial bid last fall at the $120 million mark, setting in motion the timeline to sell the site.

Since then, the group has had access to the site for testing as stipulated by its contract. Damac’s due diligence period ended this week. The developer has now agreed to up its deposit to $50 million to ensure its bid.

As many as seven companies have made serious inquiries and could put down a bid, said a source familiar with the proceedings.

Judge Michael Hanzmann, who is overseeing the legal cases that arose from the condo’s collapse, which killed 98 people, has encouraged a quick sale of the site to ensure compensation for the survivors and victims’ families.

The site is zoned for high-density residential and could accommodate a 12-story building with 139 residential or hotel units as-of-right, according to a zoning letter from the City of Surfside. However, the city has been in the process of revising its zoning code for the last year and a half in an effort to reduce density.

The victorious firm will most likely build a luxury property. Since the deadly collapse and as Miami’s residential market continues to skyrocket, developers have bought aging oceanfront condos similar to the Champlain building, with plans to knock them down and build ultra-luxurious condominiums. Last month, the Related Group and 13th Floor Investments together offered $500 million to buy an oceanfront condominium on four acres in Miami Beach.

Champlain Towers South is between the Solaris hotel and Eighty Seven Park, an 18-story condo by David Martin’s Terra just over the dividing line with Miami Beach that has been implicated in the collapse. The developers, a group led by Terra, have been sued by the victims and family members in a class-action suit, which alleges that the construction of the condo was a factor in the collapse.

Some victims and family members had initially been opposed to a sale of the property, and hoped to turn it into a memorial, but Judge Hanzmann overrode them, saying the property “will be sold — because it has to be sold.” It was clear that such a rare opportunity for an oceanfront development site in Surfside would garner investor interest.

The auction will take place at the Miami-Dade County Courthouse in Downtown Miami on May 24. Bids are due on May 20.

Update: This story has been updated to reflect that David Martin was not personally named in the class-action lawsuit against the developers of Eighty Seven Park, as was previously stated.