Transforming Buildings to Usher in the Office of the Future 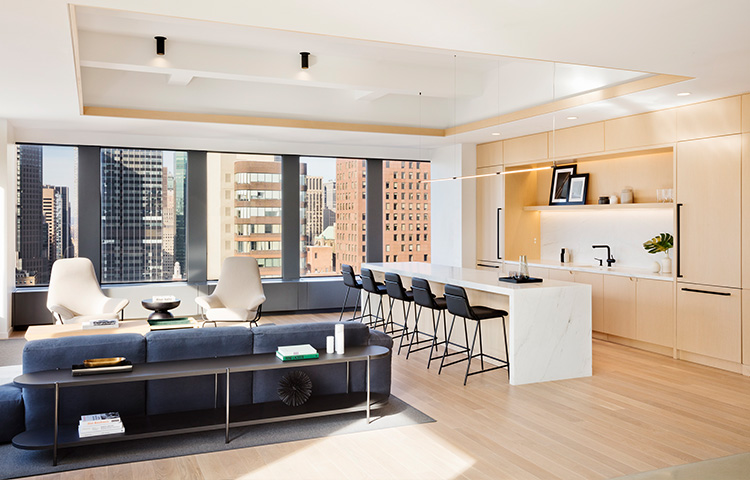 It’s spring 2022 and, after a few false starts, office workers in New York City finally seem to be heading back to actual desks in actual office buildings. While not everybody is coming into the office every day, slowly but surely there are more briefcases marching down the sidewalks, longer lines at coffee shops and visitors congregating more frequently in building lobbies.

But what kind of office spaces can workers expect to come back to? Across the city, whether in century-old brick fortresses; modern steel and glass high-rises; or repurposed industrial properties, employees are seeing changes in their physical spaces, HVAC and power systems, and day-to-day property management operations.

Between 2017 and 2019, Boston-based Rockpoint developed or acquired 1.8 million square feet of office space in Manhattan, beginning with the 256,000-square-foot 413 West 14th Street and 412 West 15th Street complex in the Meatpacking District, which the firm redeveloped in partnership with Tao Group and Highgate Holdings. In 2018 and 2019, Rockpoint acquired 1700 Broadway and One Dag Hammarskjold Plaza, in two separate transactions, from Ruben Companies. These investments complemented Rockpoint’s portfolio of residential and hospitality investments within the city.

Paul Amrich, a vice chairman at CBRE, who handles leasing at One Dag and 412 West 15th Street, shared, “Rockpoint has always had a visionary eye regarding which Manhattan submarkets and specific properties have the most potential. Their ability to do so is rooted in seeing how a property can be transformed, in a differentiated manner, to best meet tenant demands.”

Rockhill expanded its pre-build program with Fogarty Finger to both 1700 Broadway and One Dag to showcase each property’s attractive physical attributes, including 360 degrees of light and views, generous slab-to-slab heights, side core elevators and tower floor plates measuring 13,300 to 16,800 square feet. These spaces provide mid-sized tenants the opportunity for full-floor identity and privacy. Pre-built spaces have been completed by Fogarty Finger across four floors at 1700 Broadway and two floors at One Dag, with two additional floors underway at One Dag.

At 1700 Broadway, the capital program also included a lobby renovation led by Gensler’s New York Office, which is located in the building. The lobby has been outfitted with striking artwork by Robert Swain and Linling Lu. Tenants also have exclusive access to the 1700 Broadway Club and its 2,200-square-foot rooftop terrace and private bar, all designed by Fogarty Finger, via new destination dispatch elevators. The club offers its tenant members a differentiated space within the building to collaborate, relax and connect with their colleagues and corporate neighbors. Staffed and open daily, the club provides on-demand meeting spaces for events, conferences and in-building offsites. In the evening, tenants can host networking events, yoga classes, guest speakers and wine tastings. As companies encourage workers to return to their offices, the club offers a carrot instead of a stick.

For its retail spaces, Rockhill also thoughtfully curates a mix of shopping, dining and other amenities. For example, at Rockpoint’s Meatpacking District property, Nusr-Et, the eponymous restaurant founded by globally famous chef Nusret Gökçe, aka, Salt Bae, will be opening its latest New York City outpost in May 2022. The neighborhood has benefitted from the recent migration of companies to Hudson Yards and the opening of the much-anticipated Little Island in 2021. A resurgence in retail leasing activity is also underway, with new Gucci and Breitling boutiques slated to open later this year.

As an affiliate of the building owner, Rockhill is empowered to make decisions quickly to meet tenant needs. While maintenance issues are addressed immediately, it’s about more than just problem-solving. Jamie Nicholson, executive vice president at Rockhill, said, “We take pride in resolving issues, but we’re also focused on building communities around causes that are important to our tenants. To that end, we bring programming into our buildings, including electronic waste recycling, charitable drives and rooftop bee farms to encourage pollination.” Brian Waterman, executive vice chairman and principal at Newmark, agrees. “It’s important in any market, and more important in a volatile market, for tenants to choose not just the building, but the landlord they are creating a partnership with for the next five to 10 years. Rockpoint and Rockhill understand this and want to create long-term relationships with their tenants that extend beyond lease execution.”

CBRE’s Amrich added, “With Rockhill as its operating arm over the last seven years, Rockpoint is able to bring best-in-class services directly to its tenants. Most importantly, Rockpoint has always operated with the utmost respect and integrity, garnering the firm high regard from investors and local partners alike.”

New York City office is coming back and ready to meet the challenges of a post-pandemic world in which the rules have been rewritten. Rockhill firmly believes that those who can collaborate with tenants and achieve a shared vision will be the winners in this uncharted environment.