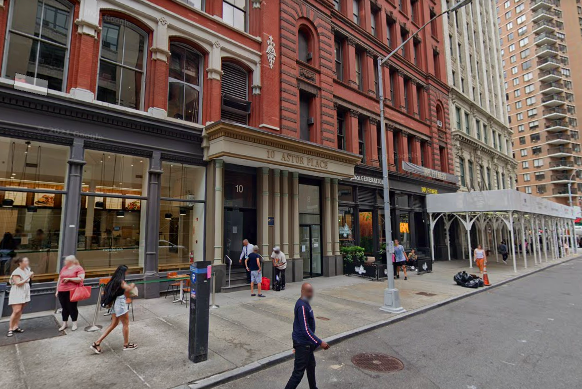 Raising Cane’s — which has 615 restaurants in 32 states — signed a 20-year lease for 4,358 square feet of corner space in the building owned by GFP Real Estate, taking over from Walgreens, according to the landlord.

The Texas-based chain plans to open 100 locations across the country this year, including its New York City debut with a 4,500-square-foot Times Square outpost, QSR Magazine reported.

Corey Zolcinski, Patrick Smith and Erin Grace of JLL represented the chicken joint in the Astor Place deal. Ross Kaplan and Will Chaplin of Newmark handled it for GFP alongside Vogel.

Asking rents were not disclosed, and JLL declined to comment.

Built in 1876 by architect Griffith Thomas, 10 Astor Place was designed in the neo-Grecian style for industrial use by a printing company. The renovated space offers a modern lobby and loft-like spaces, according to GFP.