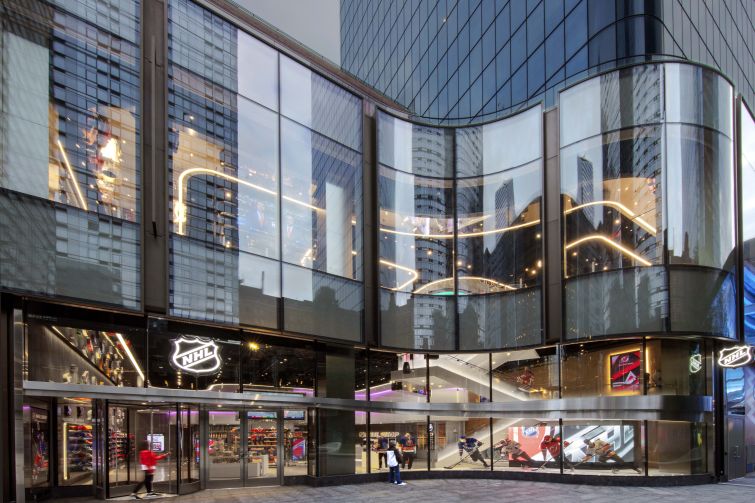 The new NHL shop, designed by TPG Architecture, tries to reference both the undulating facade of One Manhattan West and the feel and shape of a hockey rink. Photo: Eric Laignel 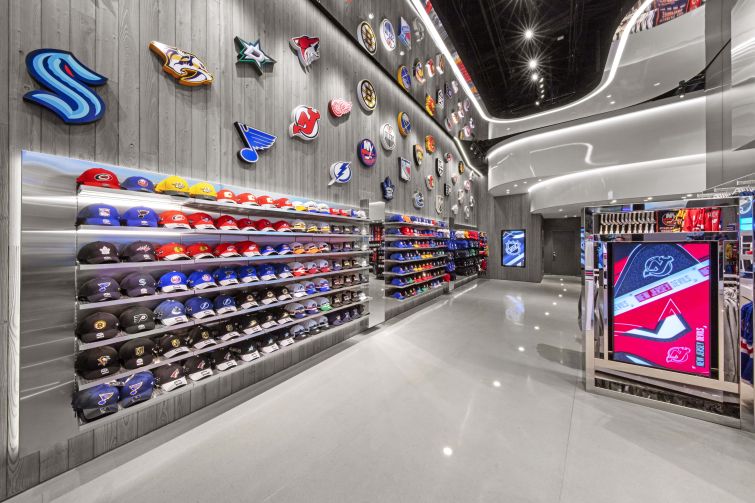 A wall of NHL team hats and pendants is arranged by the entrance of the store to draw in fans from all different teams after games at Madison Square Garden. Photo: Eric Laignel 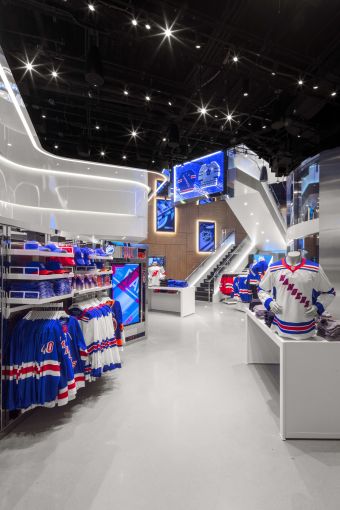 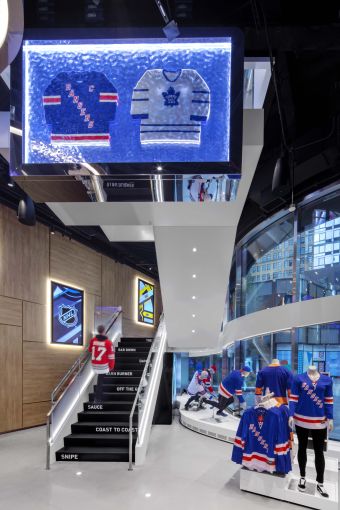 Historic team jerseys are suspended over the stairway in resin that's meant to resemble a block of ice. Photo: Eric Laignel 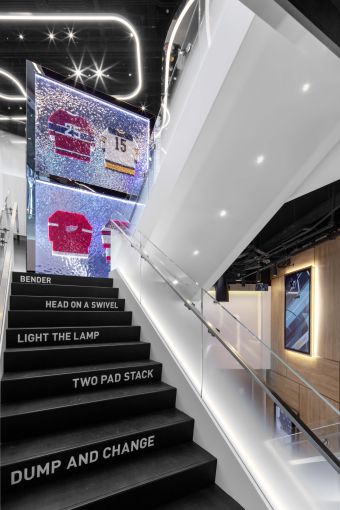 The jerseys are from the NHL's original six teams. Photo: Eric Laignel 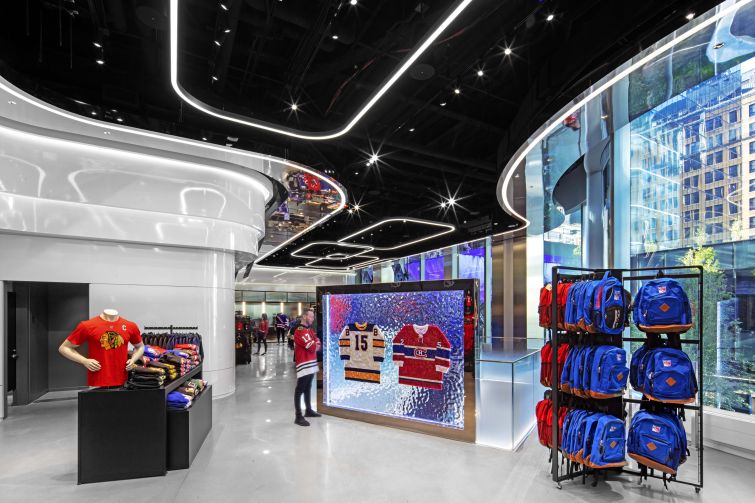 Overhead light fixtures mirror the shape of a hockey rink, while the poured concrete floor is supposed to channel the look of ice. Photo: Eric Laignel 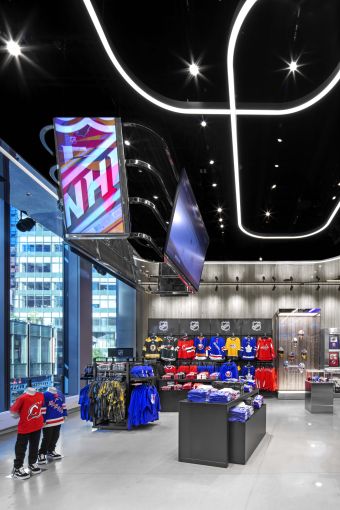 A space on the second floor has movable shelves and overhead light and camera mounts, allowing for players or coaches to host a live broadcast in store. Photo: Eric Laignel 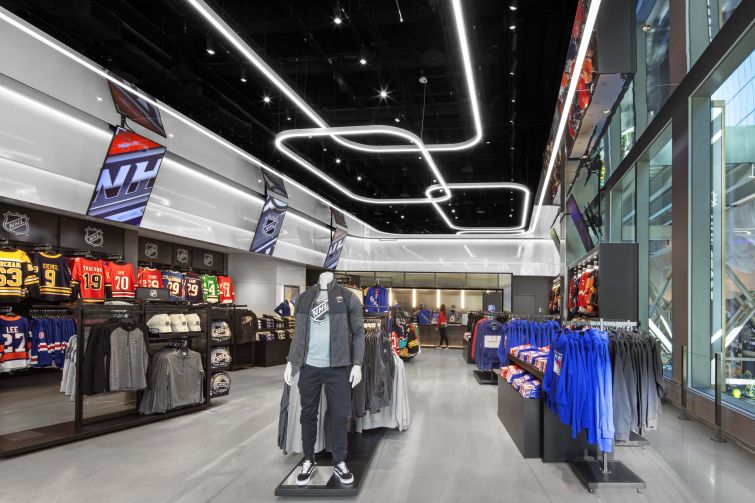 When the NHL moved its headquarters to the Far West Side, it also opted to move its flagship retail store to the ground floor of its new office building, One Manhattan West.

Although the move brought it closer to Madison Square Garden — just one avenue away, in fact — the league had to figure out how to draw fans over to Ninth Avenue and West 33rd Street, which isn’t exactly a tourist destination. So the league tapped TPG Architecture to figure out how to create a unique design for the 10,000-square-foot, two-level store that opened late last year.

The league was able to strike a deal with Brookfield Properties, the developer of Manhattan West, to create an ice skating rink in the outdoor plaza in front of the store during the winter. The rink offers space for players to do press events and host youth programs. The store is also set up for TV or digital broadcasts, with movable furniture on the second floor as well as  preconfigured lighting and camera mounts in the ceiling.

TPG’s Alec Zaballero said he wanted to make the store seem modern and sleek, to match the glassy aesthetic of the building, while helping hockey fans feel at home. He incorporated warm woods on some walls of the store, in a reference to early 20th century steel-and-wood hockey rinks, which were often called “barns.” Next to the front door is a long, gray wood feature wall where every NHL team is represented, with team hats displayed on stainless steel shelves and team logos and pendants hung on the wall. At eye level, next to folded stacks of team shirts and jerseys, there are also touch screens that customers can use to navigate the NHL retail website.

Along the ceiling above the cash register are long, undulating molded pieces of gray plastic with color-changing LED accent lighting, which are meant to mirror the curved facade of the store and the building. The LED lighting can also be programmed in team colors for a specific event.

“The store itself is modern, and it’s about curves, the white of the beaterboards and gleaming of the ice,” Zaballero said. “The light fixtures take inspiration from the brushed steel of the skate blade, and the floor itself is a continuous poured surface which starts to feel like the surface of a frozen pond.”

On the stairway to the second floor there’s a tall, stainless steel display case with jerseys cast in translucent, backlit resin — meant to resemble a block of ice — that represent the six original NHL teams. The upper floor includes a metal counter along one wall where fans can customize their merchandise, and in the center is a display area where the clothing racks can be moved for a potential broadcast. Suspended from the ceiling, facing the plaza, is a stainless steel rack with four TV screens, one facing each direction, dubbed “the jumbotron.” It can broadcast games and other digital hockey content.

Elsewhere on the upper floor are displays of hockey memorabilia, including team pucks, historic photos and well-known player jerseys, and an exhibit curated by the Hockey Hall of Fame in Toronto.

“How do you make it a must-go if you’re a hockey fan?” asked Zaballero. “It’s part of what makes this a pilgrimage site. You can go and see artifacts you’d have to go to Toronto to see otherwise.”