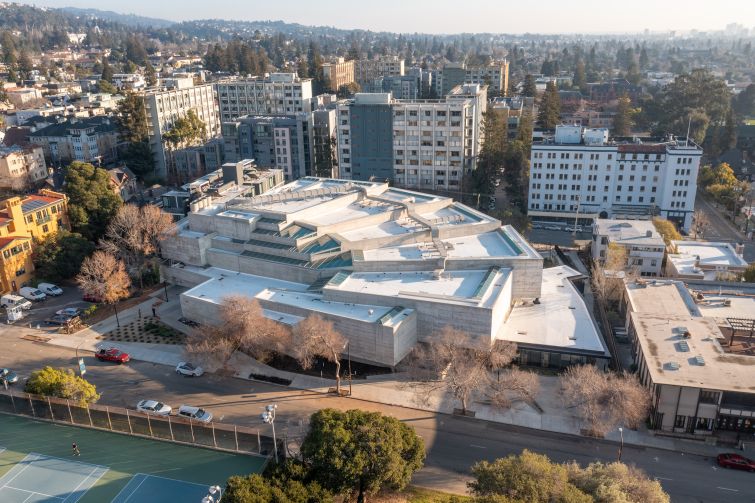 The new incubator aims to bridge the gap between UC Berkeley graduate students and biotech companies, as well as provide a starting point for early-stage startups in bioscience and life sciences. photo: Cris Gebhardt

A historic former museum at the University of California, Berkeley has been transformed into a coworking life sciences incubator called the Bakar BioEnginuity Hub.

Built in 1970 and designed by the late architect Mario Ciampi, the mid-century Brutalist structure was formerly the Berkeley Art Museum and Pacific Film Archive. While maintaining the historically significant elements of the original structure, the four-story, 94,000-square-foot landmark now features 40,000 square feet of flexible wet and dry labs.

Much of the Bakar BioEnginuity Hub opened in February, according to reports, but a spokesperson for the architecture firm said the grand opening is in May.

The new incubator aims to bridge the gap between UC Berkeley graduate students and biotech companies, as well as provide a starting point for early-stage startups in bioscience and life sciences. Invesco acquired the property at 2630 Bancroft Way for $39.5 million in August 2021, property records show.

Cushman & Wakefield’s national life sciences report for the first quarter found that sector growth has driven demand for laboratory space in life sciences hubs across the country, and most significantly in San Francisco. The market’s expansion has accelerated in the Bay Area with more than 46 million square feet of lab inventory.

“From early-stage startups through the largest life sciences companies, demand has outpaced existing supply in most Bay Area markets 2-to-1,” the report reads. “The region’s highly educated workforce, reinforced by its proximity to elite research institutions such as UCSF, Stanford and UC Berkeley, has made the Bay Area one of the most elite and active life sciences clusters in the world.”