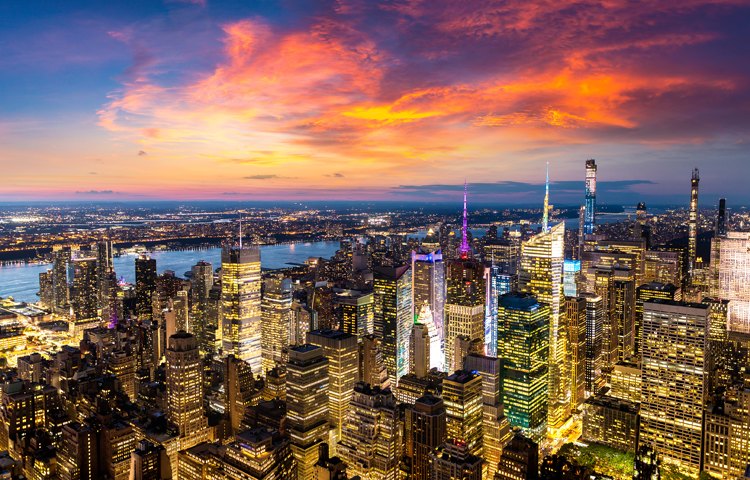 The recent shift in New York government, from Gov. Andrew Cuomo and Mayor Bill de Blasio to Gov. Kathy Hochul and Mayor Eric Adams, has many in commercial real estate overjoyed, as the new state and city administrations could well be described as CRE-friendly. Partner Insights spoke to Travis Terry, president of the urban strategy and government relations firm Capalino, about how CRE could benefit from the new administrations.

Commercial Observer: This year brings a new governor and a new mayor to New York. How happy are New York developers that Hochul and Adams are in place?

Travis Terry: I think they’re generally happy and cautiously optimistic about the future. We’ve all been through a lot in the last two years because of the pandemic, and the whole future of commercial office space and how we’re working is changing. Now, it feels like real estate has a real partner in the governor and mayor, and that is important because government and the CRE industry are going to have to work together to make sure everyone has opportunities for success.

Hochul proposed changes to 421a, and state lawmakers recently omitted the entire thing from their own budget. If it does wind up passing, how would these changes affect developers and their ability to build in New York?

For us to address the affordability issue, we have to build, so we have to provide real tax incentives to create enough housing, both market rate and affordable. A recent study by engineering and planning firm AKRF estimated that we need to construct 560,000 units of housing by 2030 to address the housing demand, about enough to fit the entire population of Boston. Without 421a or a similar program, many developers will simply choose not to build, or to build condominiums, due to the inequities inherent in the tax system.

The governor has been very focused on this issue and proposed a reasonable incentive package for developers. The governor’s plan, which is called the Affordable Neighborhoods for New Yorkers tax incentive (485-w) and was recently endorsed by Mayor Adams, seeks to push developers to have greater percentages of affordable units, as well as an increasing percentage of units that would be available to residents making between 40 and 90 percent of area median income, or AMI. I know some people want to go lower on AMI and others want to eliminate, but in my opinion this plan will maximize the amount of affordable housing for all New Yorkers at all income levels and that is important because we need this economic mix. We also need to build effectively in all five boroughs. What is important about the governor is that she understands that she’ll need to work with the real estate industry — and others — to get real progress on affordable housing. Affordability is a major problem, and we must find places for people to live to maintain the kind of workforce needed in the city and state and to enable economic opportunity for everyone. While lawmakers recently pulled this plan from their budget responses, I suspect that they will ultimately make a deal.

The governor had initially proposed zoning changes, including allowing apartments on single-family lots, then wound up scrapping them. What were your thoughts on that?

This relates to the accessory dwelling units [ADU] proposal that was put forth. Personally, like many planning organizations such as the Regional Plan Association, I’m very supportive of this proposal as a way to create thousands of affordable units fairly quickly and to ensure proper regulations. There was some push back because communities didn’t want to see that level of density, and maybe that is why the governor backed off. But many ADUs already exist illegally, and without proper regulation they are at best unaccounted for when planning for neighborhood needs and services, but at worst, they are potentially unsafe. I’m hopeful that with continued advocacy, it will get done.

Do you think the governor’s proposed Interborough Express will happen, and if so, what effect will that have on commercial real estate in New York City?

I do think this will happen, especially with all the infrastructure money coming into the city and state. We have to move away from planning commercial real estate for Manhattan and having the other boroughs feed off that in a kind of hub-and-spoke model, with Manhattan as the hub. We’re seeing an increase in demand for commercial real estate working environments in Brooklyn and Queens, and the Interborough Express will be an important component of that. To be able to create live-work-play communities outside of Manhattan, you need to invest in the infrastructure, and some of that is transportation. Connecting Bay Ridge to Queens is a great idea because you’re not only reducing commute times, but you’re enabling development and growth in those areas.

Some do, particularly those who had development projects in Brooklyn. That said, if people think Eric is going to be a pushover on development projects because of past relationships, they’re really mistaken. My experience in working with him is that he works in good faith, is reasonable, and as borough president, he advocated strongly for the communities he represented while keeping in mind the economic realities of development. As mayor, I see him continuing this pattern of negotiation, pragmatism and focusing on public benefits. He appointed a very impressive economic development team. These are people who have both vision as well as experience getting results to help people, which is very encouraging. A lot of important projects, such as parks, schools and streets, can be achieved through public-private partnerships, and what’s exciting people about Eric is that he’s open to all of that.

I think there was a sense that the de Blasio administration was anti-business and, consequentially, left too much on the table including zoning changes and opportunities to create affordable housing. Eric, on the other hand, doesn’t seem to be anti-anything so long as what is being proposed provides better opportunities for New Yorkers. Part of that philosophy is not dismissing the major role real estate plays in New York. Some of our clients and friends felt with the previous mayor that it just wasn’t worth investing the energy to try to engage in real conversation around public-private partnerships. With Eric, it feels more positive so far.

Are there any specific steps you would like to see Adams take for the benefit of the commercial real estate industry in New York?

I’ve spoken with several global investment banks. They tout their recent focus on ESG [environmental, social and governance] investments and have launched funds to invest billions of dollars in development and infrastructure, particularly in historically underserved communities. This mayor can tap into that to create public-private partnerships that can really help all neighborhoods. I’d also love to see him continue to focus on addressing issues of public safety, homelessness, [New York City Housing Authority], workforce development, street life and school equity. Because when we focus on all of those things, it creates opportunities for everyone, which is in the best interest of the commercial real estate sector and the city at large.

How do you think the next few years of Hochul and Adams will shake out for commercial real estate in New York?

Assuming Hochul will win, which I hope she does, I think the next few years will be positive. I’ve spoken to CEOs of major corporations and executive directors of nonprofits, and everyone is thinking about how their organization is going to work in the future. The COVID pandemic really shined a light on the need to rethink what office life will be like, and how work-from-home policies will look as people slowly return to the office. We can’t live in the past. We need to focus on the future. To do so, we need creative thinking and flexibility by both government and the private sector. Ultimately, I think Hochul and Adams are up for the job. I am generally optimistic, and believe that they understand the value of the commercial real estate industry for solving important issues, and mapping a bright future for the city and the state of New York.