Getting Wind of It: NYC Seeks to Build Offshore Wind Facility on Staten Island 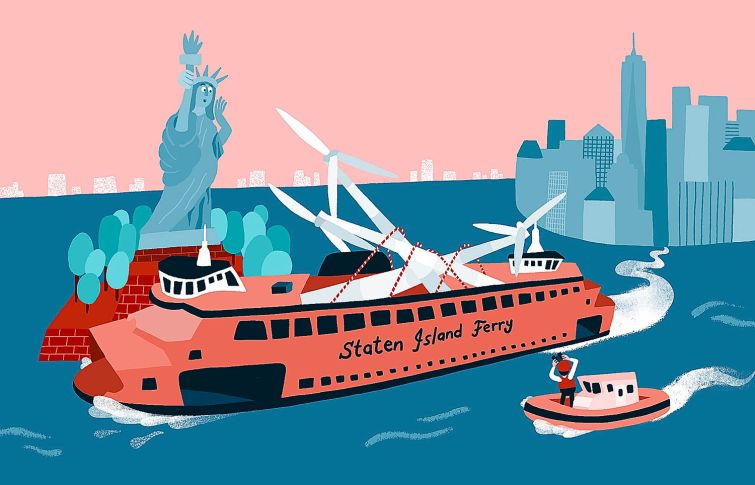 NYC's Economic Development Corporation is looking for a developer to build an offshore wind manufacturing facility on the South Shore of Staten Island. Illustration: Marta Sevilla for Commercial Observer

The city’s Economic Development Corporation issued a request for proposals (RFP) this week to build an off-shore wind manufacturing facility in Rossville, on the southwestern corner of Staten Island. The agency is looking for developers to construct the wind manufacturing, or staging, facility on a 33-acre site along the Arthur Kill Channel.

The lot at 2629 Arthur Kill Road has 2,000 feet of shoreline and is located off the West Shore Expressway, not far from the Outerbridge Crossing to New Jersey. It also happens to be adjacent to the Staten Island boat graveyard, which is owned by a marine salvage and dredging company. The city acquired the largely vacant site in 1990 with plans to construct a jail, which never moved forward, the RFP notes.

Any proposal to develop the property should “create a jobs center on the waterfront with an emphasis on good-paying manufacturing and industrial jobs, including the delivery of a comprehensive hiring and wage program that supports local communities and creates broad-based opportunity, with a focus on opportunities for low-income persons,” according to the RFP. The development should also be “environmentally sensitive” to nearby wetlands and minimize carbon emissions by using alternative sources of power and fuel.

An offshore wind manufacturing project on the site could be eligible for capital funding from the city and the state, thanks to Gov. Kathy Hochul’s $500 million investment in offshore wind, she announced in January.

The RFP follows Mayor Eric Adams’ announcement last month of a deal with two petroleum companies — Equinor and bp — to redevelop the long-vacant South Brooklyn Marine Terminal (SBMT) in Sunset Park into an operations and maintenance facility for a state offshore wind project. The SBMT will become a power interconnection site for Equinor’s Empire Wind 1 project, which is projected to bring 816 megawatts of power to New York City starting in 2026. Equinor and bp will also build heavy-lift platforms at the 39th Street pier for wind turbine staging and installation.

Equinor is working on three offshore wind projects off the coast of Long Island that are expected to bring several thousand megawatts of power to New York state by 2035. Danish energy conglomerate Ørsted and Connecticut-based utility Eversource are working on a fourth offshore wind facility near Montauk, dubbed Sunrise Wind. Altogether, the projects are supposed to power 2.4 million homes in New York state and generate 6,800 jobs in the five boroughs, Long Island and Albany.

Along with a hydroelectric transmission line to Canada and several upstate wind and solar farms, the projects are part of a larger effort to transition New York state’s electric grid to greener sources of power. Once these projects start providing power to New York City, landlords will be able to buy carbon credits — otherwise known as renewable energy credits — to offset their energy usage and avoid potential fines under the city’s Local Law 97, which aims to drastically reduce carbon emissions from buildings.