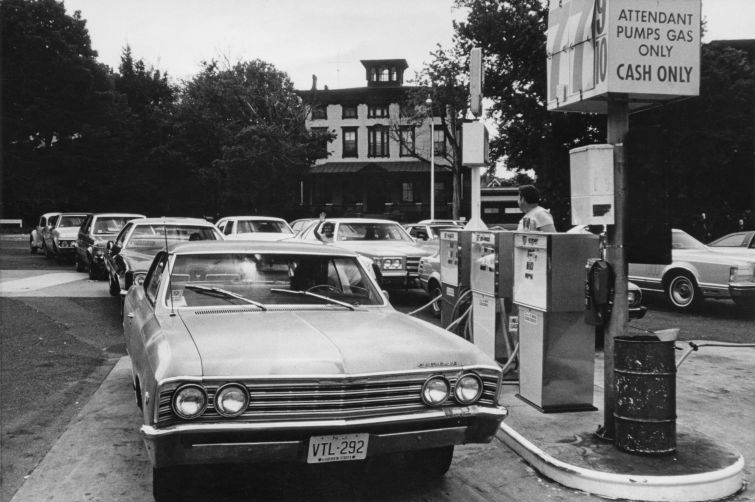 Rising inflation and higher interest rates to try to rein it in have sparked comparisons to the economic climate in the U.S. in the 1970s, which included long gas lines and creative attempts at boosting household income. Photo: Frederic Lewis/Archive Photos/Getty Images

Ask David Bitner, head of Americas capital markets research for Cushman & Wakefield, to start painting a picture of our current economic outlook, and it’s filled with good tidings despite the wildly uncertain times. There’s a rip-roaring labor market, household balance sheets are great, many Americans have more money than they did a few years ago, and relatively few corporations that took advantage of low rates will face refinancing risks in the near term.

“There are lots of positive things taking us through the year,” Bitner said.

Then there’s the big negative. The specter of inflation, and rising interest rates, casts a dark cloud of uncertainty over the market at large. In mid-March, the Federal Reserve approved a 25-basis-point increase in its benchmark federal funds rate to try to curb the escalation. It also penciled in additional increases, expecting to hit 2 percent by the end of the year and 2.75 percent by the end of 2023. These are levels not seen since the Great Recession and enough to fuel comparisons to the late 1970s and early 1980s, the last time interest rates hit double-digit percentages, also amid an attempt to rein in ballooning inflation.

“We’re not far from 10 percent inflation in the U.S.,” said Brian Coulton, London-based chief economist with Fitch Ratings. “If I said two years ago inflation was going to hit 10 percent in the U.S., people would have laughed at me. This feels like a regime-change moment from an inflation perspective. Everything is accelerating.”

If the rate rise doesn’t tame inflation, the result would take a big toll on an already-shrinking gross domestic product (GDP), according to FitchRatings, which predicts that U.S. GDP growth, a key measure of the nation’s economy, will decline by 2 percent annually over the next two years, going from 5.7 percent in 2021 to 1.6 in 2023.

The question the commercial real estate industry faces, then, is how a changing lending environment and a rising cost of capital may impact a COVID-19-era comeback, or whether the focus will remain on taming rising costs and labor expenses, and picking winners in the great pandemic reshuffling of real estate.

The result of this uncertainty could prove decisive, especially with a concurrent and significant shift in where capital and investments are focused. At the moment, investment levels in sectors such as life sciences, multifamily and industrial are at record highs. Previously niche areas such as self-storage, motorhome parks and industrial outdoor storage are drawing heavy investment as well as — for the first time, in some cases — large institutional investors. Even sectors such as office and hospitality that struggled amid pandemic lockdowns are toddling toward recovery.

The rate shift has unmoored expectations, though, and brought an end to the era of cheap money. That has created a challenging environment for long-term real estate strategy and monetary policy. Bitner said the Fed’s aim — to hit a “Goldilocks outcome” where relatively small rate hikes stop inflation — carries risks, and is far from guaranteed.

“There’s going to be a big uncertainty premium,” Bitner said. “The world is flipping a coin, and we need to see where it lands.”

There’s little hard data yet on exactly how cap rates and debt costs will move the commercial real estate market during this inflection point, or how real estate will be embraced as a hedge against inflation. Bitner said the broader markets are showing 10-year Treasuries up 80 basis points, and Triple-B bonds up 140 basis points since the start of the year, with commercial mortgage-backed securities about 10 to 30 basis points above that. He expects upward pressure, but sees it playing unevenly.

Coulton compared today’s change in the global investment climate to then-Fed Chairwoman Janet Yellen’s normalizing policy in 2018, when high-yield bonds and emerging market bonds lost pricing in the equity markets. At that time, though, commercial property investment continued amid a narrowing of the spread between mortgage rates and interest rates.

It’s important to place these rate and market changes in the context of post-pandemic investment, said Joseph Baksic, an associate managing director with the structured finance group at Moody’s Investors Service. Accelerated e-commerce trends means that certain segments of retail, for instance, will see more challenges, he said, while other commercial property types will see heightened liquidity on a sustainable basis, such as the self-storage industry. Industrial has and will continue to do well, while office, and the uncertainty over corporate real estate footprints, will remain unsettled.

A recent presentation by Sam Chandan, professor of finance and director of Stern Real Estate at New York University, pointed out the exceptional performance of industrial and self-storage real estate investment trusts, widespread availability of equity and debt, and an acceleration of pandemic-era spatial trends. Chandan said this suggests the forces shaping the real estate market before the Fed’s move may prove to be more important to this year’s overall performance.

Property owners in general may be near-term winners, Baksic said, as high inflation will give them the ability to charge higher rents to stay ahead of expenses. Cash flow appreciation often translates into higher valuations, as rents rise to keep up with demand; multifamily owners will realize significant gains in a time of nationwide double-digit rent increases, evaporating vacancy rates and locked-in mortgage rates. That explains increased investment interest in single-family rental properties, according to an annual sentiment survey by law firm Seyfarth Shaw.

“I don’t think property owners need a reason to charge more money if they have the leverage,” Baksic said. “It’s an inflationary environment. When you’re in an inflationary environment, rent can often be raised, offsetting the upward pressure rising interest rates place on capitalization rates. This is particularly true for some property types, such as multifamily and industrial, right now.”

It might not be as true for office property. In most major markets, including New York, occupancy is still hovering below 50 percent on average during a given weekday, according to security firm Kastle Systems, which tracks access swipes. And, not surprisingly, the same markets are struggling with a lot of vacant space to lease or sublease. Raising rents, then, even to deal with inflation-driven cost increases, isn’t as much of an option when trying to draw tenants to lease that space.

In the end, real estate executives seem to be unmoved by the shifts, according to the Seyfarth survey, which found 84 percent of execs are optimistic about the year, roughly the same as last year. That may be a rush to take advantage of relatively lower rates in the near term now that the Fed has choreographed its moves into the future; but respondents overwhelmingly predicted rates wouldn’t rise more than 100 basis points, the level which they felt was sustainable before CRE felt any material impacts. Rebecca Rockey, Cushman & Wakefield’s head of economic forecasting, said as much in a recent analysis. With real growth over 3 percent, profit margins at record highs, interest rates still relatively low and an expected minor interest rate rise priced in, she argued the Fed’s move will “ultimately benefit the long-term health of the property markets.”

REITs will face beefier costs for capital and expansion, as higher interest rates make it harder to expand with borrowed money. And the lending environment may be difficult for CMBS, Baksic said.

“CMBS lenders will make a loan if they have an understanding of how they can sell the loan,” he said. “CMBS was a quarter trillion-dollar lending industry before the financial crisis, when interest rates were much higher, so it’s not like business will disappear. What’s a greater challenge [than high rates] is pricing volatility. If spreads continue to behave erratically, it’s harder to understand how you’re going to exit when you enter.”

The pace of rate change will make a huge difference too, a Moody’s analysis said. A slower pace will allow borrowers to exit leases and re-price before being crushed by higher mortgage payments. A faster one, however, would give lenders less time to catch up, and for properties seeing decreases in net operating income, that could create a refinancing risk and the danger of balloon payment exposure (though the analysis said the risk remains low due to recent amortization).

Another significant factor? The push toward deglobalization. Russia’s invasion of Ukraine could supercharge the push toward decoupling the global economy, said Fitch Ratings’ Coulton. World leaders keep talking about supply chain security, energy security and food security, making stuff at home. It’s the opposite of globalization, and may lead to investment in more manufacturing and industrial sites in the U.S.

Divining the depths to which inflation and rate changes impact the economy will be key to getting ahead of a shifting landscape. Cushman & Wakefield’s Bitner plans to pay attention to a few factors to see where the economy is headed: the yield curve between different bonds (a predictor of recessions), commodity markets, China’s economy (which he says has performed worse than many understand) and the corporate bond markets. They can help provide a few months’ headstart as to what will be seen in the real estate market. Whether the rate rise proves to be smooth and well-planned, or exacerbate existing issues, remains to be seen. But the Fed’s shift has definitely marked the end of an era.

“The market got used to the Fed stepping in and liquifying the system,” Coulton said. “I don’t think that works anymore with an inflation problem, and that’s a pretty important change. I don’t think the market has wrapped its head around that.”