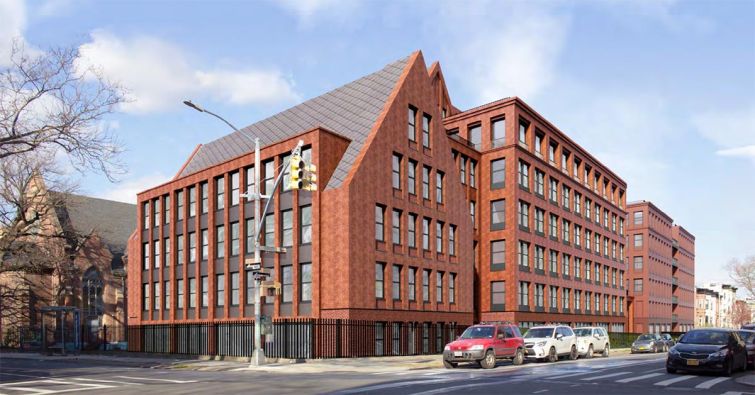 A rendering of the proposed project at 959 Sterling Place. Image: Morris Adjmi Architects

Crown Heights neighbors sued the city to block the redevelopment of a landmarked church and school in the central Brooklyn neighborhood, arguing that it is too large for the area and will block the views of neighboring apartments and townhouses.

The seven-story, 158-unit rental complex at 959 Sterling Place (also known as 920 Park Place), designed by Morris Adjmi Architects, would have 48 affordable apartments and amenities like a lounge, a fitness center and a communal garden. A coalition of neighborhood groups and block associations are suing the developer, Hope Street Capital, and the Landmarks Preservation Commission (LPC), which approved the project in May 2021.

The plaintiffs — who filed an Article 78 proceeding last week in Brooklyn Supreme Court — claimed that the development would disrupt the Crown Heights Historic District with its height and its 315-foot-long street wall. They also argued that the project approved by the LPC was “significantly different” from the developer’s original proposal, and did not address the community’s concerns about height and open space as well as blocked views of the landmarked church and school. Hope Street and Morris Adjmi did adjust the project in response to LPC’s criticism of the initial design, and the commissioners greenlighted the new version of the project last spring.

The Hebron Seventh Day Adventist School and Hebron Seventh Day Adventist Church currently occupy the property, which takes up half of the block between Park Place, Sterling Place, Brooklyn Avenue and New York Avenue. The crumbling Gothic Revival campus was originally constructed in 1889 as a home for elderly members of the Brooklyn Methodist Episcopal Church. The new two-building development would front the vacant portion of the lot on Sterling Place and include a short glass atrium connecting the buildings with an opening to allow a view of the existing school. Part of the school — an addition built in the mid-20th century — is being demolished as part of the construction.

Neighbors have been fighting against the redevelopment of the Hebron Seventh Day Adventist campus for a few years, including at a lengthy public hearing hosted by LPC in October 2020.

Attorney Michael Hiller, who represents Sterling Place Block Association and other groups involved in the suit, said that the development “violates the landmarks law on the merits of the application” and “is grossly inappropriate for that particular development site and for this particular historic district.”

He hopes that a state Supreme Court judge will overturn the development’s certificate of appropriateness — which Hope Street needs for construction — and the developer will be forced to go back to the drawing board.

Hiller claims that the LPC violated the law by failing to hold a public hearing on the revised version of the project. He also feels that the current design of the complex violates the spirit of the landmarks law by blocking views of the church from Sterling Place.

“There is a project here that could potentially work, but this one is not it,” Hiller said. “But the commission is the custodian of our landmarks, and they owe the public the opportunity to engage in a dialogue that leads to the kind of project that would not only restore the church but would complement the rest of the district, so what’s constructed there is consistent with the rest of the district.”

An LPC spokesman said that Hope Street’s project went through a “robust hearing process that included many hours of testimony from the public,” along with the review of 900 letters sent in opposition to the project. The developer didn’t return a request for comment on the suit.

Local politicians also came out against the project. City Councilmember Chi Ossé, who represents that part of Crown Heights, said in a statement that the development “is opposed almost uniformly by the community and would strip the area of communal green space. It should not be built, especially without community input.”

State Senator Zellnor Myrie opposes the project on the grounds that it will be unaffordable for the surrounding neighborhood.

“The proposed project would exacerbate housing unaffordability in an area of Crown Heights where a substantial rent gap exists and gentrification has already taken hold,” he said. “We need deep, lasting affordability for community residents.”