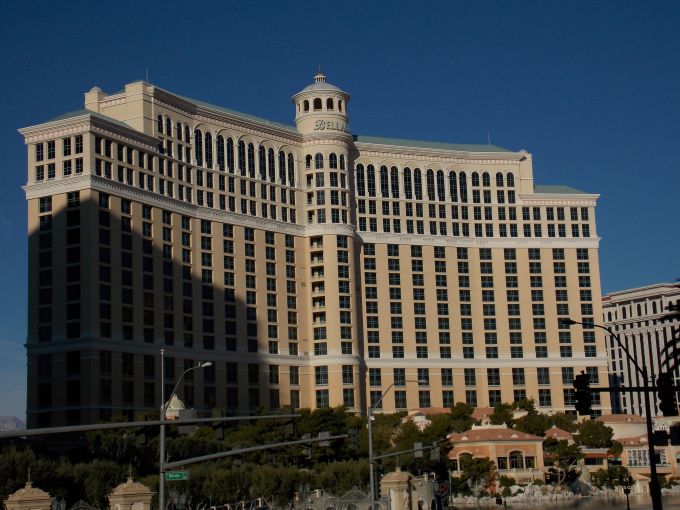 A CMBS loans backed by the Bellagio Hotel and Casino in Las Vegas is well-represented in the portfolio holdings of ESG-labeled funds. Photo: WikiCommons

“For clarification, any fixed-income  mutual fund or bond ETF with ESG in its name was included in our analysis. A subset of 17 fixed-income funds and bond ETFs was identified as having an ESG label.

“An analysis of individual portfolio holdings, primarily  from 2021 through year-to-date 2022, indicated that ESG-labeled funds held CMBS securities with a market value of  approximately $245 million, inclusive of an outstanding par amount of $230 million and a $368 million aggregate notional balance for investment at different subordination levels within their capital structure based on risk preference and allocation mandates.

“The minimum CMBS concentration was in an ETF with a broad allocation strategy that included a wide array of fixed-income and asset-backed securities. The  maximum concentration of CMBS positions was in a fund that specialized in securitized  products.

“The comfort level of an investor analyzing both credit risk and ESG metrics for a single asset is relatively higher  than similar analysis for a conduit fusion transaction with a large group of loans secured by multiple types of properties in geographically diverse markets. Agency transactions, mainly comprising Freddie K transactions, accounted for 25 percent of the market value of all CMBS securities held in  ESG-labeled funds while conduit transactions accounted for only 17 percent.

“Looking at commonalities among holdings, there was little crossover in CMBS deals held by more than one fund. Of the 310 individual CMBS holdings included in the analysis, there were 121 securitizations, equal to 39 percent, that  were only held by one individual fund in the subset. This may be unsurprising as each fund has its own investment objectives and selection criteria; however, one could reasonably expect industry-wide ESG evaluations of the CMBS sector and third-party ESG advisory firms to converge on a  select group of CMBS deals that are relatively more suited to be included in an ESG-labeled bond fund.

“One surface-level characteristic observed among commonly held SASB CMBS positions across funds was collateral with LEED certification, which implies a high level of sustainability and energy efficiency. However, such a designation is fairly common for trophy assets — in many cases, office properties often found in SASB transactions.

“Notably absent from the fund holdings in our study was SLG 2021-OVA, a green bond securitization totaling $2.3 billion secured by  the trophy office asset, One Vanderbilt. The green CMBS bonds were not present in any of the ESG-labeled publicly traded ’40 Act funds included in our analysis.

“Looking more closely at common CMBS holdings across funds, several of Freddie Mac’s ESG-friendly K certificates, KG00 Series and KSG00 Series, appeared in as many as  three separate funds. However, these holdings were too infrequent to discern any patterns of investments across fund portfolios.

“By market value, Freddie Mac’s FREMF 2019- KG01 transaction was the largest CMBS position across all ESG-labeled funds. But this securitization was only held by two of the 17  funds in the study.

“By frequency of position, the most commonly held CMBS deal by ESG-branded funds was the DROP 2021-FILE single-asset single borrower securitization, which was represented in five of the 17 funds in the  study. The transaction is collateralized by a $600 million mortgage that is secured by The Exchange, a 12-story, 750,000-square-foot office property located in the Mission Bay submarket of San Francisco.

“From an ESG perspective, the DROP 2021-FILE transaction did not appear to be structured as a green bond offering, but  certificate payments passed through from cash flows from the collateral may seem appealing due to the office building’s LEED Platinum certification. The office serves as the global headquarters for Dropbox, which subleases to multiple tenants that operate in the life sciences sector.

“A small percentage of The Exchange’s net rentable area is leased to Ballast Point Brewery, a subsidiary of lease guarantor Constellation Brands. Ironically, several ESG-labeled fund prospectuses state that investments will not be made in securities of any issuers engaged in certain screened  industries, including the manufacturing of alcohol, but fund prospectus language stopped short of underlying tenant exclusion for CMBS securities.

“Expansion of exclusionary screening for CMBS investments can be explored by tenant, industry, loan sponsor or any other direct or indirect party to a securitization. The  operation of gambling casinos is a commonly excluded industry by several ESG-labeled bond fund prospectuses. However, high-profile CMBS loans backed by the Bellagio Hotel and Casino and MGM Grand & Mandalay Bay are well-represented in the portfolio holdings of ESG-labeled funds, with investment positions across six of the 17 (35 percent) ESG-labeled funds.

“The absence of any discernible patterns of the types of CMBS investments that are included in ESG-labeled funds can be attributed to a number of factors. Variability can arise from differing methodologies used by portfolio managers to score or identify worthy investments.

“Execution of strategies may be inhibited by market competition for the same deals that are universally accepted as ESG-friendly. Over time, a reasonable expectation is for CMBS investments to converge toward a relative hierarchy to see more consensus and less randomness in the CMBS deals that are held in ESG bond funds and bond ETFs.”