At 300 Park Avenue South, an E-Commerce Firm Tries for Trendy 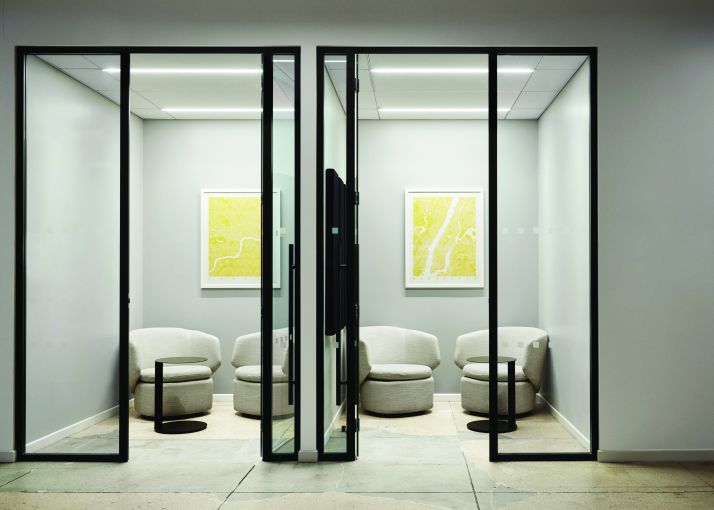 Executives at e-commerce company nate wanted their new work space at 300 Park Avenue South to be both trendy and welcoming in order to entice workers to return to the office.

“We wanted this space to have a youthful brand identity,” explained Maria Bastos, nate’s creative director.

The 13,000-square-foot office is largely open, populated by long tables with three workstations each. With 15-foot ceilings and large arched windows, the office is bright and airy, but employees don’t have much privacy. So Bastos, working with nate’s other leaders and their interior designer Kate Mills, planned a few areas for people who want to work or relax in private. Construction started in July 2021 and finished in September.

There’s a meditation room with round gray cushions and Japanese-style low wood tables, where workers can have casual meetings or meditate independently. Along one wall is one of the arched windows, fronted by a white window seat with green pillows. Another wall has two framed, rectangular patches of moss, along with a black, rounded side table topped by a potted white orchid. Tall plate glass windows separate the meditation room from the rest of the office, and right outside of it is a blonde wood ping-pong table.

In addition, the office has a boardroom, with a custom-made light wood table and bright yellow Eames-style office chairs. The third large meeting area is what the company calls the “living room,” with a long, light gray couch, four overstuffed black armchairs and a round, white pedestal coffee table. There are also smaller, two-person meeting areas, like prefabricated wooden booths with cafe-style tables, and narrow, glassed-in ones with short gray armchairs.

The building’s landlord, Rockrose, designed the kitchen before nate moved in. It has a large archway, which was filled with custom-made cabinets fronted by frosted glass and framed by black wood. Gold hardware on the black cabinets, a white built-in fridge, and a long, white marble island with barstools round out the space.

Mills, the interior designer who oversaw the project, explained that the design process ran into several challenges. For example, Albert Saniger, nate’s CEO, didn’t want area rugs or carpet in the office, which can help prevent sound from traveling in a large open work area.

“The acoustics were a huge challenge because you have 15-foot ceilings with concrete floors and a ping-pong table,” said Mills. “They’re the only floor in the building to have those cool architectural windows, so we didn’t want to drop the ceiling and cover those windows. To deal with the acoustics, we put [felt] panels at the very top of the columns, and we found panels that matched the paint color exactly.” She also put up a partition made of yellow acoustic felt — suspended from the floor and ceiling by cables — between the ping-pong table and the rest of the office to help mitigate noise.

Nate also wanted gender-neutral restrooms, but the landlord had just finished renovating women’s and men’s restrooms on the floor. Mills worked with Rockrose to cover the urinals in the men’s room with a partition, and to install individual stalls in both restrooms that went all the way down to the floor so workers could have more privacy. The company wanted stalls that extended from the floor to the ceiling, but each stall would’ve needed a separate sprinkler in the event of a fire. The landlord wasn’t interested in reinstalling the sprinkler system for the restrooms, so the longer stalls ended up being a bit of a compromise.

The interior designer also ended up refinishing another item chosen by the landlord: the accent wall behind the reception desk.

“The wall was going to be glass and it looked like it belonged at the bank,” Mills said. “So we finished it with drywall, painted it black” and emblazoned it with “nate” in white.