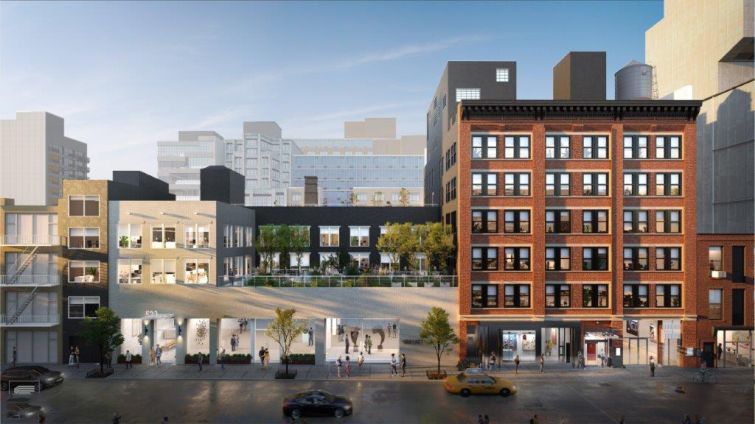 A cluster of buildings at 520-530 West 25th Street is being turned into boutique prebuilt office space and space for three art galleries that occupy the buildings' ground floor spaces. Image: Bromley Caldari 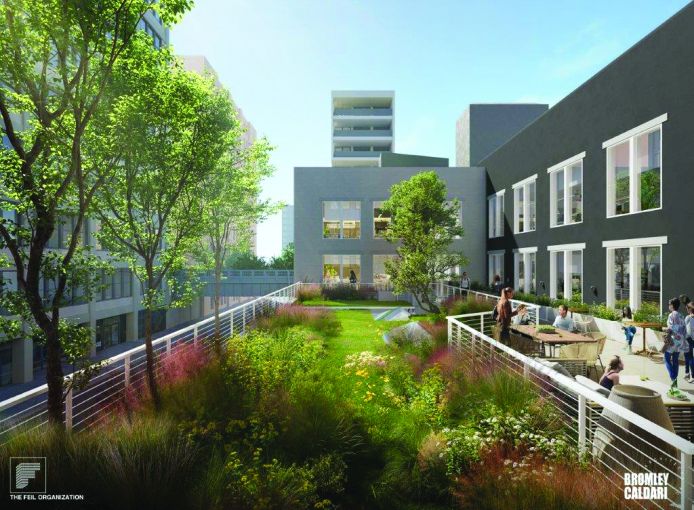 The second floor of 520 West 25th Street is being turned into a sculpture garden for Petzel Gallery, the ground floor tenant, and a shared outdoor space for tenants in the building next door. Image: Bromley Caldari 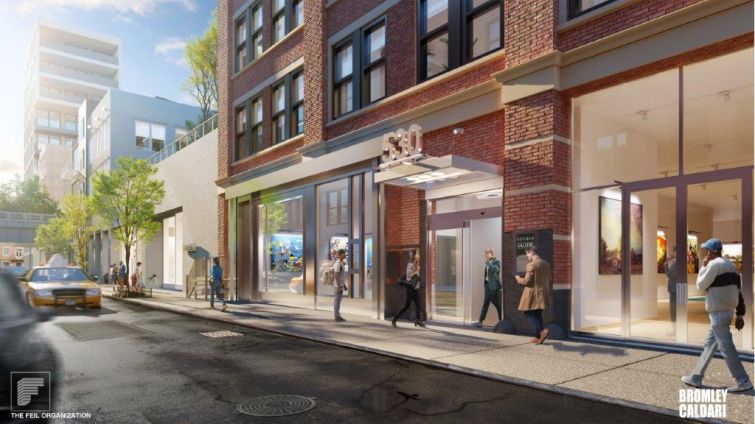 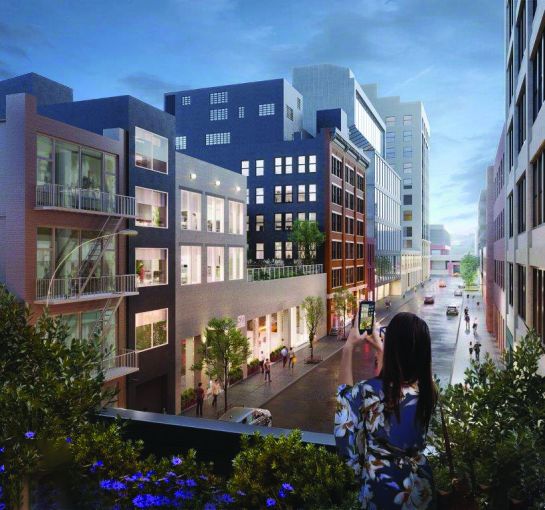 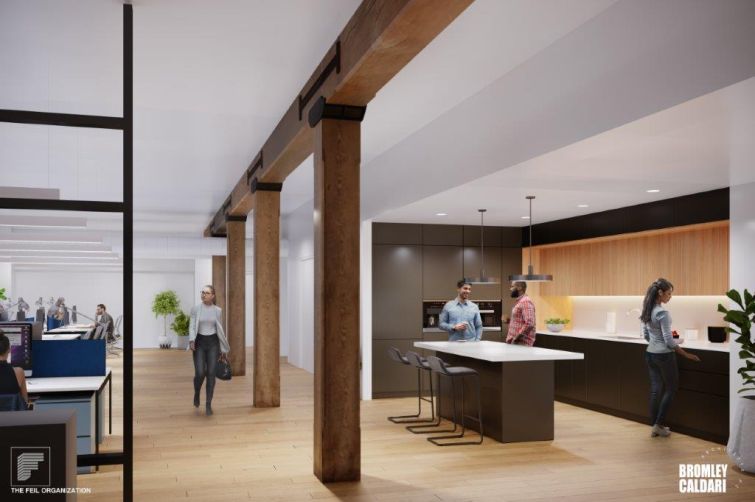 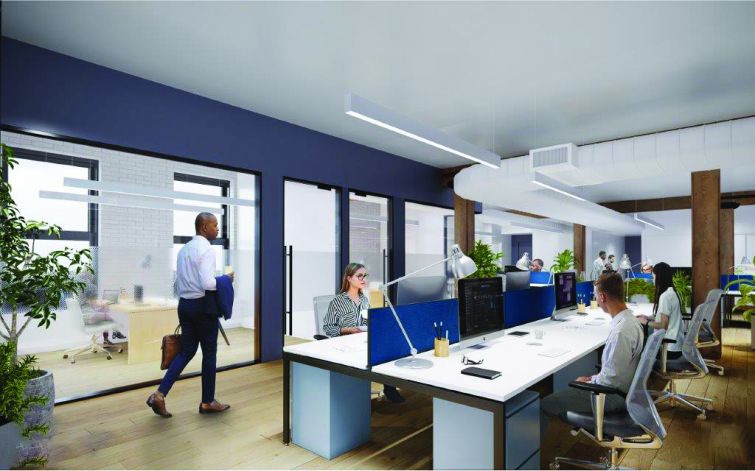 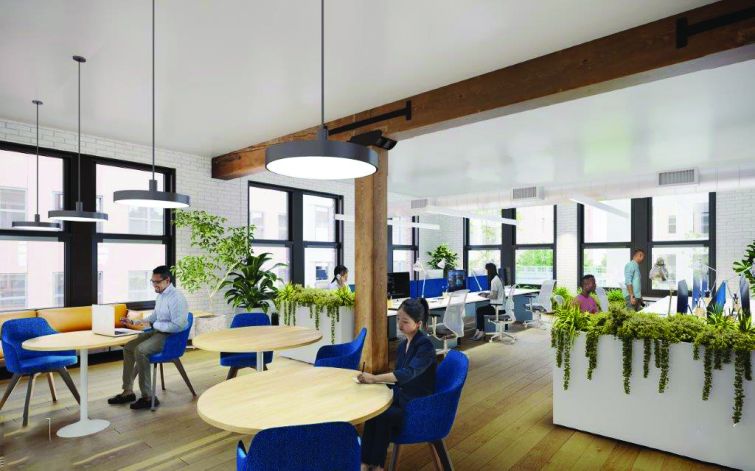 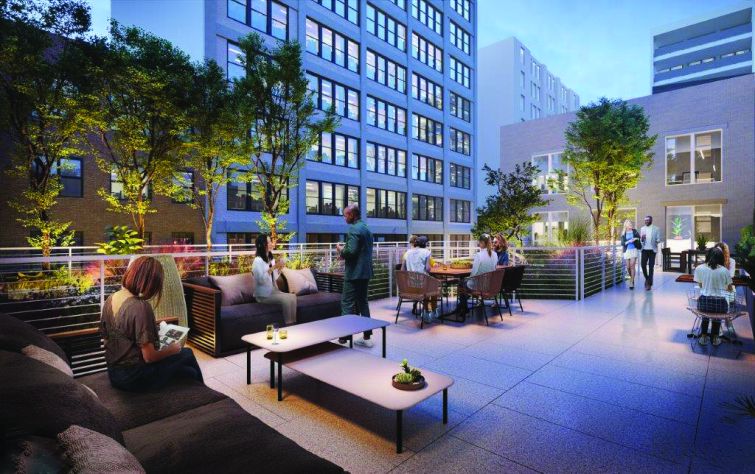 After purchasing them for $72 million in late 2019, The Feil Organization set out to turn two aging loft buildings in West Chelsea into unusual boutique office space, along with an outdoor sculpture garden for one of the buildings’ art gallery tenants.

Petzel Gallery, which will occupy the entire first floor and part of the second at 520 West 25th Street, will curate the outdoor sculpture gallery on the building’s second floor. The space, which will be accessible to tenants in both buildings, will include landscaping, trees and art, as well as seating and meeting areas. Two more galleries — Agora Gallery and Winston Wächter — occupy the first floor of the six-story building next door, at 530 West 25th Street.

The larger of the two properties is 530 West 25th, an early 20th century loft building with a brick facade and a two-story penthouse. Feil wanted to add as much outdoor space as possible. So it is turning the building’s roof into a terrace, and turning what was once an elevator shaft in the back of the penthouse into an indoor-outdoor conference area. Next door at 520 — which is essentially a single-story building with an extra two smaller floors added on — Feil is turning the top story into a roof deck too.

“We wanted to incorporate the feel of the High Line district,” said Feil leasing exec Randall Briskin, who noted that the railroad-turned-outdoor park is just two buildings over. “We are bringing the elevator up on the 520 building to create a beautiful rooftop garden that will overlook the High Line.”

The first floor of the 520 building is double height, but before the renovation it resembled a windowless garage. The lack of windows benefited the pre-pandemic tenant, a recording studio and music rental business called Studio Instrument Rentals, aka SIR. Once the renovation is finished in the fall, however, new occupant Petzel Gallery will get several large, plate glass windows and new offices fitted with modern, industrial-style windows on the second floor.

Work began in the fall of 2020. Asking rents across the two buildings range from the high $70s per square foot to upwards of $100 a foot.

At 530, Feil and architect Jerry Caldari of Bromley Caldari decided to use the building’s timber beams and brick walls to create industrial-inspired prebuilt offices. Each floor will have open workspaces, lounge areas with couches and cafe tables, and large open kitchens with dark gray-brown cabinetry and white countertops.

“We want to create third workspaces — with soft seating and a kitchen — for when people come back to the office,” said Ben Shapiro, a broker at Newmark who’s leasing the project. “We decided to furnish it ourselves and our hope is that with the growing requests for tenants to have furnished space, we could increase value. Landlords are either focused on creating a new modern workplace or they’re not going to rent.”